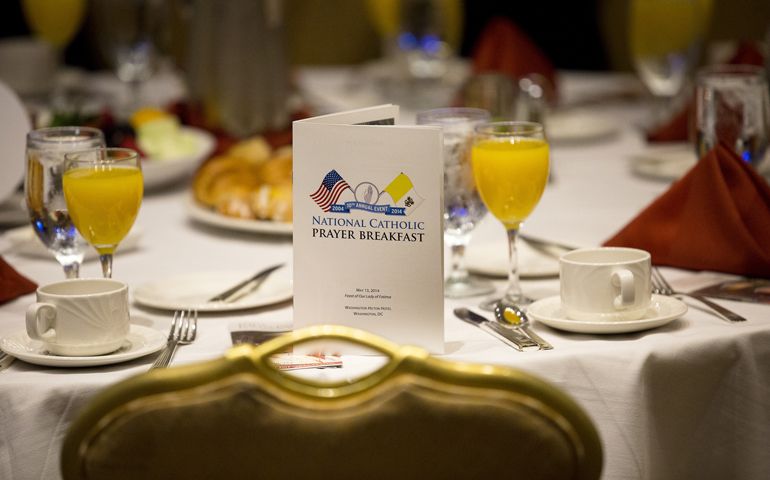 A program for the 10th annual National Catholic Prayer Breakfast at the Washington Hilton on Tuesday in Washington, D.C. (CNS/Tyler Orsburn)

O'Malley recalled his early years of ordained ministry as a Capuchin Franciscan priest at the Spanish Catholic Center in Washington, not far from the hotel where the breakfast was held.

The work there "was an uplifting experience in my life," he recalled in remarks made Tuesday at the breakfast. "Most of my parishioners were undocumented workers, refugees from the wars in Central America," he said. "We received thousands of immigrants from all over Latin America" during that era, he added.

"They were not evil invaders but people seeking to feed and clothe their families in safety, much like the immigrants from Ireland, Italy, Germany and Poland."

O'Malley said a just solution for those immigrants would be similar to that for Jean Valjean, the protagonist of Les Miserables: "Not to punish them but to initiate new and more just laws to replace a system that is broken and woefully inadequate."

The cardinal remembered that, while working at the Spanish Catholic Center, he once -- at the request of someone in the State Department -- gave shelter to a Romanian diplomat who was seeking political asylum in the United States. When he asked the diplomat why he wanted to stay in the U.S., the man replied that the Romanian government wanted him to stop going to church. "He said he could not live without the Eucharist," O'Malley said the man told him.

O'Malley told the crowd of about 800 at the breakfast that in his ministry, he "brings glad tidings of the Gospel to the periphery."

"Sometimes that periphery can mean Harvard," where a student-sponsored "black mass" to be held at the university was officially canceled shortly before the event, which was scheduled for Monday. "Being archbishop of Boston can be a contact sport," O'Malley joked before adding, "Sometimes the periphery can mean Wall Street."

Whereas during his years as a priest, an example of "the most difficult mission in the world" for evangelization might have meant the Papua New Guinea highlands, now it means the United States and Western Europe, where society "still lives in the residue of Christian culture," O'Malley said. The challenge is to make people there "disciples and disciple-makers."

In an earlier address at the breakfast, Robert P. George, the McCormick professor of jurisprudence at Princeton University, said the days of "socially acceptable Christianity" and "comfortable Catholicism" are over.

"The question each of us today must face is this: Am I ashamed of the Gospel?" said George, who also is chair of the U.S. Commission on International Religious Freedom.

"Powerful forces and currents in our society press us to be ashamed of the Gospel -- ashamed of the good, ashamed of our faith's teachings" on the sanctity of life and traditional marriage, he added. "These forces insist that the church's teachings are out of date, retrograde, insensitive, uncompassionate, illiberal, bigoted -- even hateful. These currents bring pressure on all of us -- most especially on young Catholics -- to yield to this insistence. ... They command us to conform our thinking to their orthodoxy, or else say nothing at all."

George likened such changing circumstances to the difference between Palm Sunday and Good Friday. "The memory of Jesus' triumphal entry into Jerusalem has faded. ... The love affair with Jesus and his Gospel and his church is over. Elite sectors of the cultures of Europe and the Americas no longer welcome his message," he said. "Friday has come."

But Catholic teaching on abortion and marriage is "a crucial part of the Gospel of Jesus Christ," George said. "You believe the truth -- in its fullness -- about the dignity of the human person and the nature of marriage as proclaimed by the church -- our only secure source of understanding the Gospel message."

To be a witness to the Gospel today, according to George, "is to be a marked man or woman. It is to expose oneself to scorn and reproach." He added there are "heavy costs" of discipleship, including discrimination, the loss of employment or professional advancement opportunity, exclusion of honors and recognition, and "may even cost one treasure friendships" and "produce familial discord and even the alienation of family members."

Despite assertions that Catholics are "on the wrong side of history" on such issues, George said, "history is not God. God is God. History is not our judge. God is our judge."