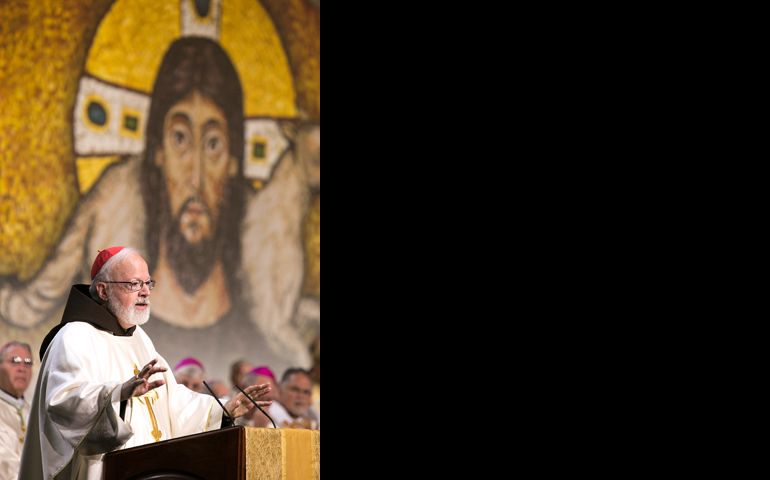 Cardinal Sean O'Malley of Boston delivers a homily Wednesday during a morning Mass at the Knights of Columbus 132nd Supreme Convention in Orlando, Fla. (CNS/Tom Tracy)

Orlando, Fla. — Boston Cardinal Sean O'Malley challenged all in attendance at the Knights of Columbus convention to be transforming agents in the world and to "connect the dots" between Christ and the suffering.

He was one of several bishops at the 132nd Supreme Convention in Orlando who spoke about the need for greater compassion for a flood of child immigrants to the U.S. who have arrived without a parent in recent months.

"In our own country in the last 10 months, 60,000 children have left behind the violence of their homelands and risked their lives crossing the border, many of them from El Salvador," O'Malley said Wednesday, noting that El Salvador is the only nation on earth named for Christ the savior.

"It was to pray for them and all those who perished in the desert that a group of bishops went to [the U.S.-Mexico border] in Nogales, Arizona, to celebrate the Eucharist at the border," O'Malley said of the April 1 Mass, during which the congregation remembered the 6,000 or so migrants who have died in the U.S. desert since 1998.

"We were amazed at the response," he said. "I believe most Catholics understood our message, which was that of Pope Francis -- whose first trip as pope was to Lampedusa, Italy, where thousands of immigrants have perished in their attempts to enter Europe."

Pope Francis warns about the "globalization of indifference," O'Malley noted, adding, "We cannot be indifferent to the wounds of Christ manifested in so many ways in suffering humanity."

"May our lives be filled with transfigurations, glimpses of glory and love in surprising places, in unlikely people," O'Malley told the Knights during a morning Mass on the feast of the Transfiguration. "We will find not strangers but brothers and sisters, and indeed Christ."

In an interview the same day, Bishop Placido Rodriguez of Lubbock, Texas, himself a Mexican-born immigrant who grew up in Chicago, told Catholic News Service he thinks the border crisis reveals a worrisome hardening of American spirit and generosity.

"The border crisis of women, mothers and children is a good reminder for all of us that we have lost our compassionate soul as Americans but it also gives us a new opportunity to regain our conscience and regain the compassion of heart, and to look at the whole problem is an opportunity as Americans to be compassionate and understanding," Rodriguez said.

"I am an immigrant as well, and so I had to learn the language and the culture and so I am also interested in the immigration issue," added the prelate, who was wearing his Texas cowboy hat in advance of the annual States Dinner the first evening of the Aug. 5-7 convention.

As a humanitarian issue, the border crisis has been so over-politicized that it is hard for Americans to talk or think about it rationally, he said, but it also represents a moment of grace for Americans to regain their footing as a compassionate people and nation.

"At the same time we look at efforts to try to alleviate the pain and suffering of these families and at least in Texas we have activated all the Catholic Charities and churches to respond to this crisis," Rodriguez said. "Some have done special collections and others have found many other ways to give a welcoming to all these unfortunate peoples."

He also said the U.S. government must collaborate with Mexican and Central American authorities to stem the flight of people north across the U.S. border. Gangs, poverty, lack of opportunities at home and false rumors have fueled the migration, he said.

"If we want to resolve this problem it has to be bilaterally," Rodriguez told CNS. "The U.S. and Mexican bishops have always been talking to each other and we produced a [related] pastoral letter but it goes unnoticed by many."

The bishops' joint pastoral asked for sweeping changes in immigration policies on both sides of the border. Titled "Strangers No Longer: Together on a Journey of Hope," it was issued in January 2003.

In an interview with Boston-based CatholicTV Network, Miami Archbishop Thomas Wenski noted that over the last 10 years, U.S. lawmakers have failed to pass a comprehensive U.S. immigration reform measure despite many opportunities.

"It looks like that is not going to happen" during the current Congress either, he said. "That is unfortunate because the problem is not the immigrants, the problem is a broken system."

"Many of us Catholics are only a generation removed from the immigration experience ourselves. We have to have some solidarity and work for a just and fair immigration reform," Wenski said.

Politics | Cardinal O'Malley: 'Wounds of Christ' can be seen in suffering of migrants