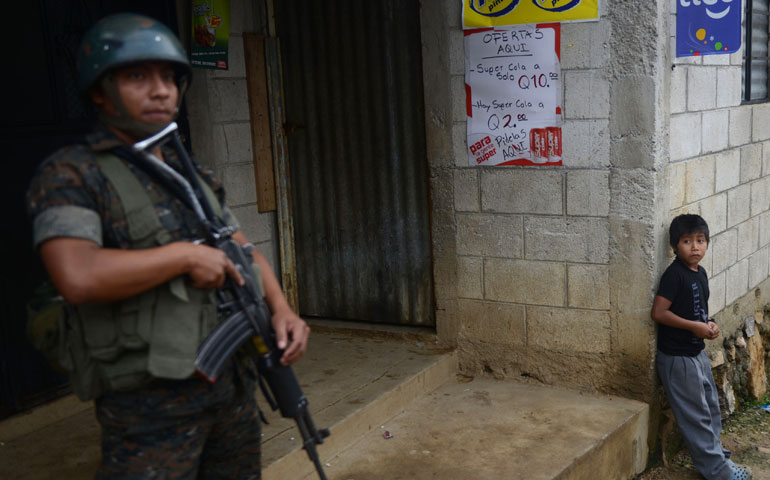 A child looks at a soldier standing guard at a crime scene where 11 people were killed by alleged members of a gang in San José Nacahuil, Guatemala, Sept. 8, 2013. (AFP/Getty Images/Johan Ordonez)

As the situation at the U.S. border wears on, with child migrants arriving by the thousands, many escaping extreme violence, the question of first causes has begun to take hold of the public's imagination.

Why are so many children fleeing the small Central American nations of Honduras, El Salvador and Guatemala?

In speaking with experts on Latin America, one theme continues to surface: The violence that brings these children to the border is a result of rampant economic inequality and social exclusion.

"It's not the case that these kids just arrived out of the blue," said Susan Bibler Coutin, a professor of criminology, law and society in the School of Social Ecology at the University of California, Irvine. "There's a history that led to the creation of conditions where it wasn't safe for them to remain in their homelands, and the United States played a key role in creating those conditions."

Throughout the 20th century, Honduras, El Salvador and Guatemala -- collectively known as the Northern Triangle -- endured rule by oligarchic regimes. Large swaths of the population lived in poverty while corrupt ruling-class elites profited off American business interests, usually in bananas and coffee. Beginning in the 1960s, a decades-long period of civil war swept the region.

The wars continued through the early 1990s and were notoriously brutal. In El Salvador, "the United States provided military and economic assistance to the Salvadoran government despite the fact that significant human rights abuses were being committed," Coutin said. "There were death squads and paramilitary forces throughout the country. It was during the Cold War, and the U.S.'s position was that El Salvador was fighting against communist insurgencies."

Slowly but surely, the wars subsided -- but hopes that the Northern Triangle would democratize never materialized.

"In the case of El Salvador and Guatemala," said José Miguel Cruz, an expert in Central America at Florida International University, "the old police institutions were dismantled completely and new ones were created from scratch, but they were infiltrated by operators of the old regime, all bad apples, and the corruption carried on."

"There was no breakdown of the incredible concentration of property and wealth," noted William Robinson, a professor of sociology at the University of California, Santa Barbara. "There was no real redistribution of political power, which remained in the hands of these small oligarchies, as well as emerging transnationally oriented business elites. There was very limited political democratization in terms of the implementation of electoral processes. So no one's lives changed. ... Poverty was deepening, inequality was deepening."

And political and civil life in the Northern Triangle began to spiral.

In 1996, U.S. immigration reform resulted in a spike in deportees back to the still fragile postwar nations. In America, many of the deportees had had contact with U.S. gang culture, and they brought with them those cultural norms.

It wasn't that gangs simply picked up and moved south, notes Cruz, who performed surveys in Central America in the 1990s and the 2000s which showed that most who joined gangs never came to the U.S. Instead, it was that the gang mentality found fertile ground.

"Young people found in gangs a way to deal with all the exclusion and inequality they faced in their daily lives," Cruz said.

The problem only grew as the government cracked down. In prison, the gangs "strengthened up," he said. Instead of "addressing the social problems that provoked people to join the gangs in the first place," law enforcement essentially created a "self-fulfilling prophecy," with a zero tolerance, or "mano dura," approach, only leading to increased gang activity.

The situation further spiraled when an explosion in transnational drug trade hit the region. In the past, the trafficking had been concentrated in South America, most notably Colombia, where it moved through the Caribbean into Florida. But when the U.S. shut down that route in the mid-1990s, the cartels shifted into Central America and began traveling through Mexico on their way to the States.

"The cartels couldn't do that without the collaboration of the region's militaries and police forces," said Robinson. As a result, there was an "unbelievable increase in corruption and increase in crime," he said.

From 2000 to 2010, the murder rate in Central America skyrocketed. Honduras now has the highest homicide rate in the world, at 90 murders per 100,000 people.

What does this kind of violence mean for those living in the region today? In many ways, the children at the border provide the best answer.

Leslie Vélez of the U.N. High Commissioner for Refugees, where she monitors U.S. compliance with international standards of refugee protection and assists asylum seekers, explained: "Based on what we learned, the children are leaving Central America for many reasons, including violence -- and they're not all refugees. But from our own research, we learned that 58 percent of the children on U.S. soil at the time we did research presented international protection concerns."

Another child migrant researcher, Fulbright scholar Elizabeth Kennedy, provided a snapshot of what children say is happening in El Salvador.

According to David Shirk, a professor of political science and international relations at the University of San Diego, "The key difference between the kind of violence we saw in most of the 20th century in Central America and the kind of violence that we see today is that we've moved from ideological conflict to essentially a conflict between criminals and the state, outlaws who have no explicit political objective.

"The economic objectives are those that loom largest," he said, "but I think that there is more to it than that. It's not just about making money -- it's also about belonging. Inequality is so extreme and the political system is so exclusionary," and the U.S. "helped to perpetuate that."

A version of this story appeared in the Aug 1-14, 2014 print issue under the headline: Experts point to US role in migrants' flight.