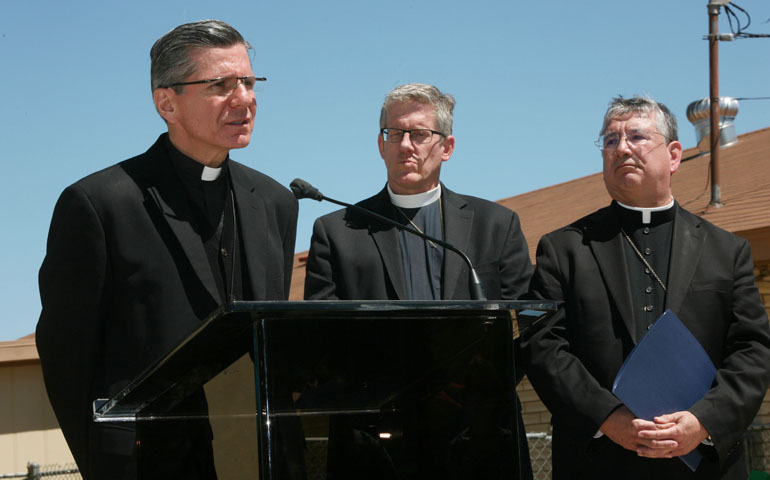 Faith leaders from around the country decried the detention of immigrant families seeking asylum, calling it inhumane, shocking and a violation of human rights, and in a letter called upon President Barack Obama to end the practice.

"It is clear there is no humane way to detain families," said Linda Hartke, president and chief executive officer of the Lutheran Immigration and Refugee Service. "Children, many of whom are babies and toddlers, do not belong in jails, nor do their mothers, who've acted only to protect and save the lives of their children."

The announcement came Friday after the group toured the newest detention facility in Dilley, Texas. In a press conference at the St. Joseph Catholic Church in Dilley, five Catholic and Evangelical Lutheran bishops, a religious sister, and Hartke announced that a letter calling for the end to the detention of immigrant families had been sent to Obama. It was signed by 80 religious leaders representing the Jewish and Christian faiths.

The group made the announcement after a tour and meeting with some of the 178 families currently housed at the South Texas Family Residential Center, the country's largest immigration detention facility that can hold up to 2,400 people. The leaders also criticized the "impossibly high" bonds that had been set for asylum-seekers and described emotional encounters with immigrant mothers who rushed to hug the bishops when they arrived.

"Tears, tears, tears," said Bishop Michael Rinehart of the Texas-Louisiana Gulf Coast Synod in the Evangelical Lutheran Church in America. "Every person I spoke with today had tears."

Auxiliary Bishop Eusebio Elizondo of Seattle, chair of the U.S. Conference of Catholic Bishops' Committee on Migration, described a similar scene: "I saw nothing but tears in all these people, in all these mothers, but also what I saw is a lot of fear. A lot of fear that they're going to just be deported again, sent back to their own countries, to the violence and persecutions they were suffering."

Speaking in English and Spanish in front of a mural depicting Juan Diego and the Virgin of Guadalupe, the bishops criticized the Obama administration's detention policy, saying these families, many from Central America, were not a threat to national security.

"Why? Why do we feel compelled to place in detention such vulnerable individuals, young mothers with children who are fleeing persecution in their home countries?" Archbishop Gustavo Garcia-Siller of San Antonio asked. "It is clear from our interactions today that these families are not [a] threat to us. It is obvious they are humble, genuine, searching for a better life and fleeing violence and persecution."

In the letter addressed to the president, faith leaders voiced similar sentiments, calling upon Obama to "end the harsh policy of family detention." They also expressed concern that the practice is "inhumane and harmful to the physical, emotional, and mental well-being of this vulnerable population."

U.S. Immigration and Customs Enforcement officials issued a statement in response: "Family residential centers are an important part of the U.S. government's comprehensive response to the unprecedented spike in illegal migration that occurred last summer."

Despite the criticism leveled at his administration, Obama has generally favored policies that provide deportation relief to undocumented immigrants. Last year, he took executive actions that would have granted a temporary halt to deportations, allowing more than 4 million immigrants to apply for work authorizations, but a federal judge in Texas halted the new policies. Arguments to implement them will be held in the 5th U.S. Circuit Court of Appeals in April.

Bishop H. Julian Gordy, chair of the Conference of Bishops Immigration Ready Bench of the Evangelical Lutheran Church, said Washington officials told him that detention is a "tool, a kind of deterrence" to keep more people from coming.

"It seems to me that if it is a tool to send a message to other countries, I'm not certain that it's effective for that purpose," Gordy said. "There are plenty of people still coming. I know that it's been effective to a really distressing degree in separating families from one another and then causing great distress to families."

"We subscribe to the United Nations convention on asylum, and using detention as a way of deterrence is not allowed in that convention to deprive one group of its liberty to make a point with another group," he said.

The United Nations' guidelines published in 2012 state: "In view of the hardship which it entails, and consistent with international refugee and human rights law and standards, detention of asylum-seekers should normally be avoided and be a measure of last resort."

While the bishops did not voice complaints about the facility in Dilley, they worried about the emotional toll of incarceration and the lack of due process.

"Their lives are marked because they are people who are unwanted, and that due process is not taking place," Garcia-Siller said.

Yvonne Dilling, the director of mission education with the Maryknoll Fathers and Brothers in San Antonio, said she has seen what the prison-like environment can do to families.

"I've seen so much depression in the children," she said, describing a conversation she had with a 9-year-old boy she met at the detention facility in Karnes, Texas. "I asked, 'You've been here seven months. What do you do here to keep from getting sad?' He just burst into tears."

But in their statement, ICE said "family residential centers are an effective and humane alternative for maintaining family unity as families go through immigration proceedings or await return to their home countries."

In addition to the emotional burden, the bishops criticized the "unreasonable" and "unreachable" bonds that many poor families could not afford to pay.

"They can come up with a bond, an impossibly high bond -- the lowest I heard was $7,500 -- or they can be deported back to the violence and terror that started all this," Gordy said.

As a solution, the bishops recommended that the immigrants be released to the community.

"There are humane alternatives to the detention of these families where they could be cared for in the community and provided appropriate support, including legal representation," Garcia-Siller said.

Elizondo said he knew of "at least 50 lawyers who are ready to help" and said he intends to keep advocating so they will be allowed to visit asylum-seekers.

But a higher calling also compelled the faith leaders to speak out.

"The Bible is very clear: We are called to welcome the stranger," Hartke of the Lutheran Immigration and Refugee Service said, vowing that the group would "redouble" efforts to close family detention centers.

"They are inhumane, they are unjust, and they are destructive to children and families. They are contrary to our values to our country and as people of faith."

[Nuri Vallbona is a freelance documentary photojournalist and is currently a lecturer at the University of Texas.]

A version of this story appeared in the April 10-23, 2015 print issue under the headline: Faith leaders call for end to 'harsh policy' of detaining immigrant families.