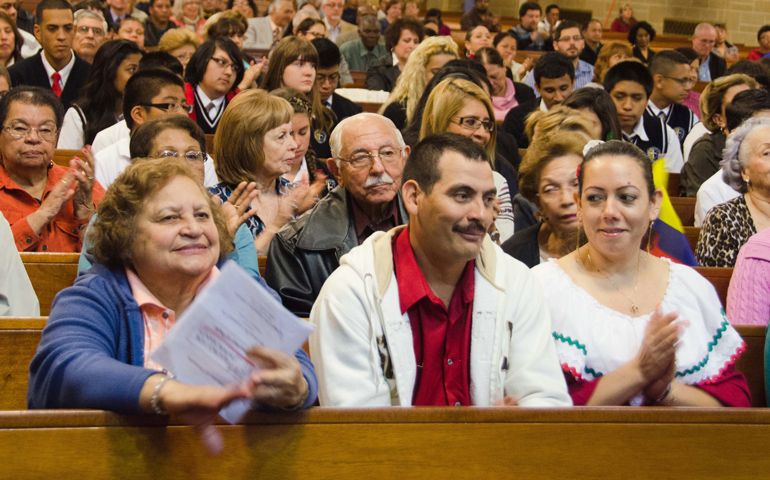 People from the diocese of Trenton, N.J., applaud during the Justice for Immigrants Mass on Oct. 11 at St. Mary of the Assumption Cathedral in Trenton. (CNS/The Monitor/Joe Moore)

Trenton, N.J. — Jesus was the "divine immigrant" who lived his life "traveling from place to place," Bishop David O'Connell of Trenton told the congregation at a midday "Justice for Immigrants" Mass Oct. 11 at St. Mary of the Assumption Cathedral.

"Sacred Scripture tell us where he was from and what his ancestral lineage was," the bishop said in his homily. "But nowhere in the Bible do we find his permanent address, the location of his house, where he lived after beginning his public ministry.

"He lived and worked as an immigrant, an itinerant preacher, on many levels," the bishop added.

With comprehensive immigration reform a high priority for many groups across the country, Catholics from throughout the Trenton diocese came together to join O'Connell at the downtown cathedral to pray and show their solidarity on the issue. Some 20 priests of the diocese were concelebrants.

O'Connell spoke of how important it was for the Catholic church to provide people with an opportunity to pray for positive movement on immigration. The Mass was coordinated by Catholic Charities and the diocesan Office of Catholic Social Services.

"It is not the church's responsibility to enact civil legislation or to take sides or participate as a church in differences of partisan political debates," he said. "No, it is, rather, the church's responsibility to educate the faithful in those matters where human moral interaction, informed by the Gospel and church teaching, need to be lifted up and prayerfully considered."

"And so we, the church, teach and preach his word and his message whenever the opportunity arises. The life that confronts immigrants in our country today is one such opportunity to preach and to teach," he said.

He also underscored that the church's social teachings are rooted in "salvation history," then reviewed several historical moments in Scripture related to immigration -- God's chosen people going from slavery to freedom in the Promised Land as well as Jesus' life journey on earth, starting with his birth, and leading to his passion, death, resurrection and ascension into heaven.

For the U.S. Catholic bishops, some key principles of immigration reform include: providing a path to citizenship; keeping families together; addressing the root causes of poverty that force people to leave their homeland; and enforcing "targeted, proportional and humane" measures to control borders.

In an interview prior to the Mass, executive director of Catholic Charities Diocese of Trenton Marlene Lao-Collins praised O'Connell for celebrating the special Mass and inviting people to pray for immigration reform.

"First and foremost, as a people of faith, we pray and then we take action," said Lao-Collins told The Monitor, Trenton's diocesan newspaper. That action includes people writing or calling their legislators, or parishes hosting group discussions about the U.S. bishops' views on immigration reform.

"I believe that today's Mass sends a clear message to our immigrant families that we are in solidarity with them and to all Catholics of the diocese of Trenton that we should support immigration reform," she said.

Roberto Hernandez, director of Catholic Charities' El Centro, which provides resources to Trenton's Latino community, noted how important it was "for the church to come together with the community. The community represented here today is not just immigrants but people who support immigration reform."

Faculty and students from several schools including St. Ann in Lawrenceville and Trenton Catholic Academy said immigration reform is often a topic of discussion in social studies and religion classes.

"This is a chance to let lots of people know (where the church stands) on immigration reform," said Ann Albe, who teaches fourth grade at St. Ann. Coupled with a teacher in-service day, the Mass was attended by the entire faculty. "We're here to lend support," she added.

Michele Neves is principal of the upper school of Trenton Catholic Academy, Hamilton, a school with a culturally diverse student body.

Of the students from the upper school and lower school she accompanied to Mass, she noted the majority hailed from a number of Central and South American countries including Panama, Dominican Republic, Guatemala, Haiti, Costa Rica, Puerto Rico, Cuba and Mexico, as well as from Nigeria, Germany and China.

Catholic social teaching, including what the church teaches about humane treatment of immigrants, is emphasized in the school's religion classes.

Trenton Catholic Academy "is privileged to serve a very diverse population," Neves said. "Just as the earliest Catholic schools in our country did, we are here for immigrant children. We prepare them for college while bringing them closer to God."

[Mary Stadnyk is associate editor and Lois Rogers is feature editor of The Monitor, newspaper of the diocese of Trenton, N.J.]

The speech Clinton must give