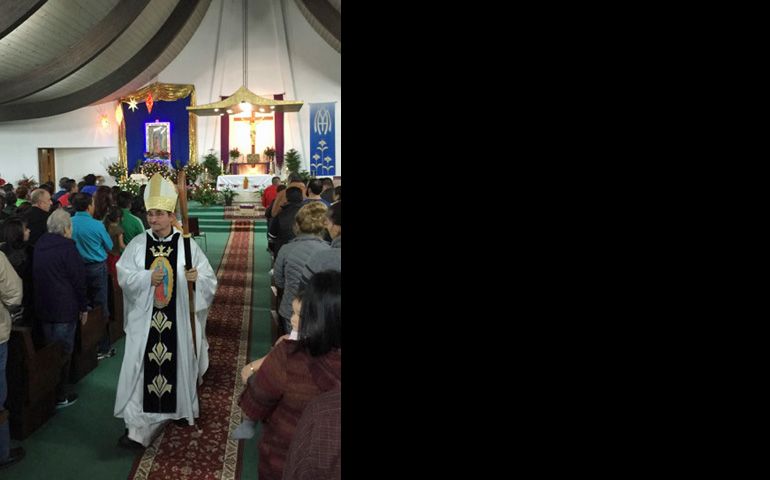 Bishop Joseph Tyson after Mass on Thursday at Our Lady of Guadalupe Parish in Granger, Wash. (Courtesy of the Yakima diocese)

"Much of the economic underpinnings for Washington state's economy is built on fraud" fostered "by the very structure of our immigration laws," said Bishop Joseph Tyson of Yakima, Wash., in a homily Thursday during a vigil Mass for the feast of Our Lady of Guadalupe.

At Our Lady of Guadalupe Parish in the small town of Granger, Wash., Tyson told the congregation, which included many agricultural workers, "You have a nobility and a greatness that comes not from a passport, a visa, a green card, or an I-9 work permit, but from being created and fashioned from the very image and likeness of God.

"Certainly, I am keenly aware that you receive the very opposite message from various sectors of our North American society," Tyson continued. "This comes from the fact -- and I will not mince words -- that we have become a nation built on half-truths. We fail to tell truth that without undocumented immigrant labor we would have very little food on our nation's table. We fail to tell the truth about the human cost this takes on our nation's agricultural workers: the fear of deportation and the constant threat of family separation."

Tyson pointed out that "agriculture is the single largest sector" of Washington state's economy, "larger than our state's higher profile industries such as computer software, aircraft and designer coffees," an allusion to Microsoft, Boeing and Starbucks.

"But," Tyson said, "it's built on a shadow economy of immigrant labor. In some form or other it's been like this in central Washington for decades."

"Courageous growers and packers also take on unique and contradictory risks in making sure we have food on our tables."

For example, he said, "if employers inspect the I-9 permit to work, they can be sued for racial profiling. If [an] employer fails to inspect the I-9, rivals can disrupt their competitors by calling in a complaint and triggering a raid."

Immigration issues are high-profile and contentious in the Yakima and Spokane dioceses of eastern and central Washington. The area is home to the bulk of the state's more than $46 billion food and agriculture industry, much of which is dependent on seasonal labor predominately made up of both documented and undocumented Hispanic immigrants.

On any given Sunday, the majority of Catholics attend Mass in Spanish in the Yakima diocese, which encompasses the counties of Yakima, Benton, Chelan, Douglas, Grant, Kittitas and Klickitat. "There are about 80,000 registered Catholics, and at least as many who are not registered, a majority of whom are native Spanish speakers," a diocesan press statement released in 2013 said.

Tyson was a key player in a nine-month effort that led to the issuing of a set of five principles for comprehensive U.S. immigration reform, released in August 2013 by a consortium of Washington state labor, business, religious and government leaders.

Those precepts endorse secure sovereign borders, underscore the human dignity of the undocumented, support the right "to find economic opportunities" in one's homeland but acknowledge a right to emigrate to secure a decent living, and declare "refugees and asylum seekers should be afforded protection."

In his homily Thursday, Tyson emphasized that his "critique" of the immigration system was not political, but based on morality.

"Dare we ask ourselves what this social reality does to all of us morally?" he asked. "Note well: the division between documented and undocumented is not simply an external division in our workplace and among our families. It's a division that runs inside each one of us -- whether we are in the Anglophone community or the Spanish-speaking community -- because all of us become compromised morally by living in a world built on fraudulent documents and fake identities."

Tyson urged the congregation to be inspired by the words spoken to St. Juan Diego by the "Blessed Virgin Mary during her second apparition at Tepayac Hill in 1531": "My little son, there are many I could send. But you are the one I have chosen."