The cathedral and the prison 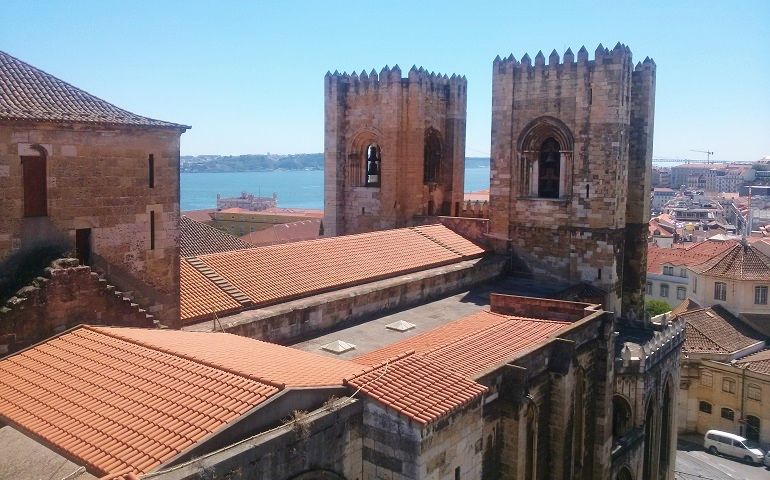 The first time I saw the Sé Cathedral in Lisbon, Portugal, I was on my way to St. George's Castle. I thought it was the castle, and I felt relieved to see it.

I had never seen a structure so massive, and since all the signage pointing toward the castle had disappeared and nothing on the side of the building identified the Sé Patriarcal as such, I assumed I had hit my destination. After all the wrong turns I had made by trying to follow a screenshot of a Google Maps route, I was relieved to see the cathedral's dwarfing stone walls and twin towers (which I didn't know were bell towers).

Then I walked to the front, saw the sign that read, "Igreja de Santa Maria Maior Sé Patriarcal de Lisboa" and the visiting hours, and felt a heat-enhanced annoyance that the building was a church.

The second time I saw the Sé, it was from inside a former prison.

I knew from the description in my guidebook that before being remodeled to house the Museu do Aljube -- Resistência e Liberdade (Aljube Museum -- Resistance and Liberty), the Aljube was an ecclesiastical prison, then a women's prison, then a prison for political and social detainees, and then "a private prison of the political police." But its interior surprised me. I entered a well-designed, modern-looking museum, minimalist in its decor. As I ascended the steps, gray and black laser-printed letters interrupted stark white walls with the translated words of Portuguese writers and activists.

At the top of the staircase stood a window, no glass, no screens, just an opening in the wall with bars crisscrossing to form a grid pattern. And outside this window: the Sé Cathedral.

I could see more of the church from the windows on every floor. On the fourth floor, the bars on the windows disappeared. They had been replaced with glass walls and sliding glass doors leading to a balcony that offered panoramic views of the city, and of the church.

I stood almost eye level with its twin bell towers, could see the parts of its roof that had been updated with red tile, saw where water had stained its 900-year-old edifice. I saw again its castle-like massiveness and how like toys the cars and people on the street beneath it looked.

I was in Lisbon to attend the sixth annual Disquiet International Literary Program July 3-18. When I later spoke to other Disquiet participants who had visited Museu do Aljube, several of them said they had to exit the balcony quickly. Some who had never had qualms about heights had felt a sense of vertigo almost immediately after stepping onto the balcony. Others reported they felt an unbearable heaviness while standing there.

One person explained the feeling was like a sixth sense. She stood on the balcony and just knew: "They threw people off here."

I did not feel vertigo or the same type of heaviness, but upon this view of the Sé, from inside Aljube, I did feel inescapably disturbed. Though the view of the church overlooking the city overlooking the River Tagus was photoworthy, all I could think was, "What was going through parishioners', priests' and bishops' minds during Mass, knowing what was going on across the street?"

I can't prove that anyone knew anything, but Oliveira Salazar's dictatorship was no secret, nor were the torture tactics used on political detainees in the facility across from the Sé.

Additionally, Portugal's Catholic identity was a part of the dictatorship's philosophy. A section of the museum is dedicated to the "Nâo discutimos," or things Portuguese citizens weren't allowed to talk about with Salazar in command. "We do not discuss God and his virtue," was one such rule. To be Portuguese was to be Catholic, and according to the museum's permanent exhibit, this ideology helped secure the church's growth in the country and in Portuguese colonies.

But perhaps the cost was ignoring rumors and testimonies of isolation, sleep deprivation, threats to family, beatings and the thud as someone across the street was thrown from a balcony. And if that's true, what went through people's minds as they worshiped in the Sé?

After leaving Aljube, I entered the cathedral. I wished for a better camera as I took photos of its gaudy gold altars and tried to capture light peeking through its labyrinth of gothic arches. Disturbed as I was by the relationships between the cathedral, the church and the dictatorship -- physical and political layers I'm still unable to grasp fully as I remember that the Sé is built on top of a mosque destroyed in the Crusades and that Aljube originally was an ecclesiastical prison -- I was still awed by the loftiness of the cathedral, by how I had to prepare my neck to look high constantly to absorb every detail.

And I wondered why such structures don't routinely inspire us to the elevated character that doesn't ignore what's going on fewer than 20 meters away.

Justice | The cathedral and the prison