Making something beautiful out of brutality exposed in mass shootings 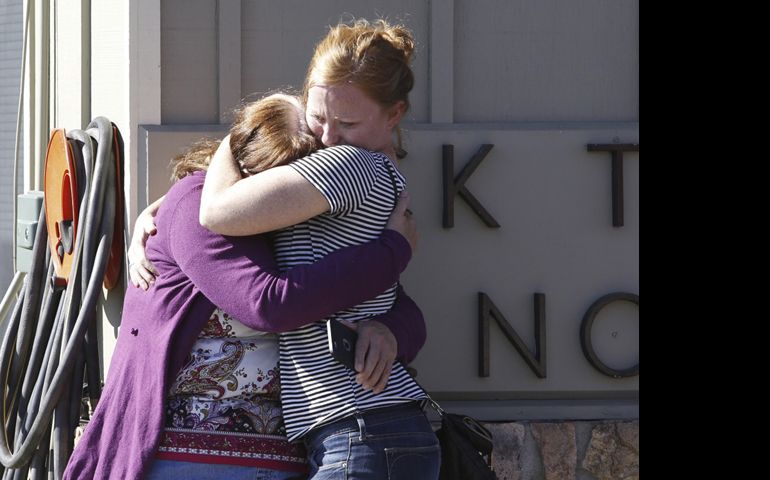 In my poetry workshop, we’ve been studying Rookery by Traci Brimhall, a poet who masterfully blends narrative with lyric. Respectively, I would describe the difference between the terms as words arranged to form a linear, logical story and words that deliver the unexpected, that ask readers to dare to imagine and that make beautiful the brutal.

In my creative nonfiction workshop, the current reading assignment is essays by or about the survivors of mass shootings or the parents of the shooter(s). The timing of the assignment is an unplanned coincidence. Each work is narrative, but nothing about the events the authors describe is logical. As one author expressed, we can make sense of suicide, even of people murdering someone they know before taking their own lives, but to murder multiple strangers and to carefully plan their executions is incomprehensible.

In my head, the killing of nine people, wounding of nine others and suicide of the shooter at Umpqua Community College in Roseburg, Oregon, is further complicated by the papal visit. The complication is not because I think the pope’s presence should or could have created a buffer against misery in the U.S. for a designated amount of time, but because it was a reminder that tragedy happens quickly, unexpectedly and often when it seems we’ve turned a new leaf and life is progressing well. Last week's national news coverage began with jubilation over Pope Francis' successful first visit to the U.S. and ended with grief and confusion over yet another mass shooting at a school. How could this sequence of events happen, and what could it mean?

For inspiration, I had been skimming transcripts of Pope Francis’ many speeches during his U.S. visit, and the following quote from his address to inmates at Curran-Fromhold Penitentiary stood out:

Any society, any family, which cannot share or take seriously the pain of its children, and views that pain as something normal or to be expected, is a society ‘condemned’ to remain a hostage to itself, prey to the very things which cause that pain.

While they remain impossible to understand, mass shootings have become as normal and expected to U.S. residents as sunrise and moonlight. As President Obama stated in frustration, they have become routine. Reporting on them has become routine. I can remember when such events captured the headlines all day, to the exclusion of every other story. Today news of a mass shooting may take up 10 to 15 minutes of a two-hour broadcast. Multiple murders could be the makings of a new slogan in the U.S., something like, “Mass shooting: It's what we do here.” We could print it on the money, somewhere near "In God we trust."

Someone kills, the rest of us ask why he or she killed and what we can do to prevent it from happening again. We get no answers and we move on. We have to ask, what pain are we not taking seriously?

Like the shooter’s father, Ian Mercer, I agree that had his son not been able to obtain firearms, he wouldn’t have shot his classmates and professor. But our country’s stubbornness on gun control shouldn’t prevent us from trying to discover a larger truth. I join the elder Mercer in wondering how his son was able to amass an arsenal of 14 guns. Even when someone purchases firearms legally, we have to question not only why it’s so easy to obtain all of them but why anyone, including the majority of gun owners, who don’t go out and shoot people at schools, movie theaters or churches, wanted so many in the first place. Are they trying to eliminate fear? To obtain power? To provide the illusion of control in a world that revolves without regard to human will?

It stuck with me that the elder Mercer said three times, “You don’t buy guns.” What peace does he have in his life that someone stocking up on firearms does not? I don’t know what the answer is, but I dare to imagine that it is the way we can make something beautiful out of this brutality.

Justice | Making something beautiful out of brutality exposed in mass shootings