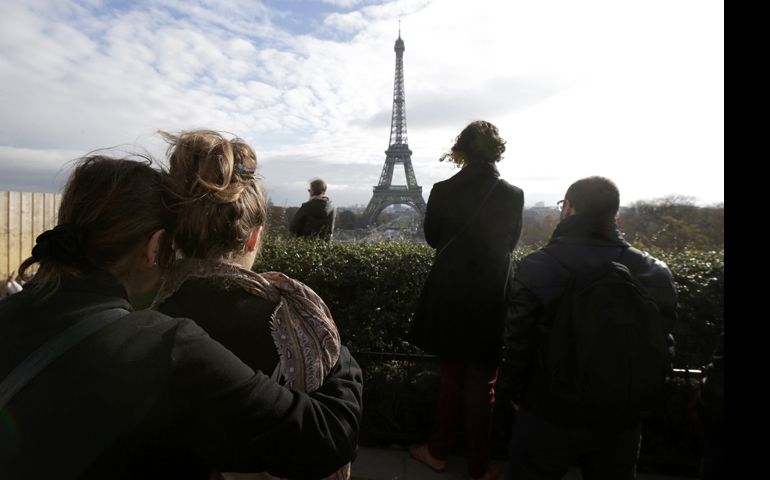 People observe a minute of silence at the Trocadero in Paris Nov. 16. (CNS/Philippe Wojazer, Reuters)

Before the volume of them induces resignation and apathy, terrorist attacks inspire within me a sense of urgency. I think about what I want out of life personally and whether those, or perhaps any seemingly selfish goals, ambitions and desires, are worth pursuing.

Why be concerned about whether I'll age out of childbearing years if I would have to raise my children in a world where suicide bombers in Beirut blow themselves up outside a school? Do I want the responsibility of trying to reassure my children the same thing won't happen where we live, or of answering an incessant "Why?" when I can't explain geo-political destabilization, radicalization, or hate any better than I could explain to them why anyone -- from another child, to a teacher, to a police officer -- might be unkind to them?

Why detail in the vision statement for my ideal life that I make enough money to take international vacations with my spouse or my friends if 129 people can die on one night out on the town in one of the world's great cities?

Why dwell on anxious questions about whether I'll be a writer whose words influence people, who gets invited to the White House to discuss policy for women and girls of color and whose books make national bestseller lists, when 78 elderly women were murdered and buried in a mass grave in Iraq, and it took more than a year to discover their bodies?

Questions to myself about my future-oriented (but, I hope, not too far in the future) goals prove that terrorism disrupts normal life by inciting fear and hopelessness. While I want to stand in defiance of that fear by pursuing life as if nothing has changed, I also feel increased pressure to find something I can do now to impact the world.

An obvious step for people of any religion that includes the practice of prayer is to pray. I've seen and shared an Instagram post from a user named "karunaezara" that implores readers to "Pray for a world" that, in summary, has been so influenced by white supremacy and xenophobia that all tragedies are not mourned equally, and that it "does not pause to differentiate between the attacker and the person running away from the very same thing you are."

I'm willing to pray. For this world, I pray that a spirit of compassion and empathy overtake it. And as a citizen of the U.S., I pray that visual art, theater, music, creative writing and dance be taught in our K-12 classrooms so that our citizens can engage compassion and empathy early and more readily. That critical thinking skills, ethnic studies and accurate history be taught at the same time so that more people's first reaction to such tragedies is not a cry to "bomb them all." That the links between war, poverty and capitalism be examined so that those three pillars can be dismantled. That college professors diversify the required reading for their classrooms, and universities offer more study abroad programs so that students have a better understanding of how similar human beings are to one another. That more scholarships be offered for these programs, and that public universities decrease the cost of education so that more of the population can access what's needed to save the world.

And rather than utter my requests only on my knees, I want to work for them, with my hands, too. I came across a tweet yesterday that said, "There's no difference between creating and praying." Like a friend of mine whose weapon of choice is "making plays and films and writing new stories," I'm going to wield my pen like a sword and hope that it strikes a fatal wound.