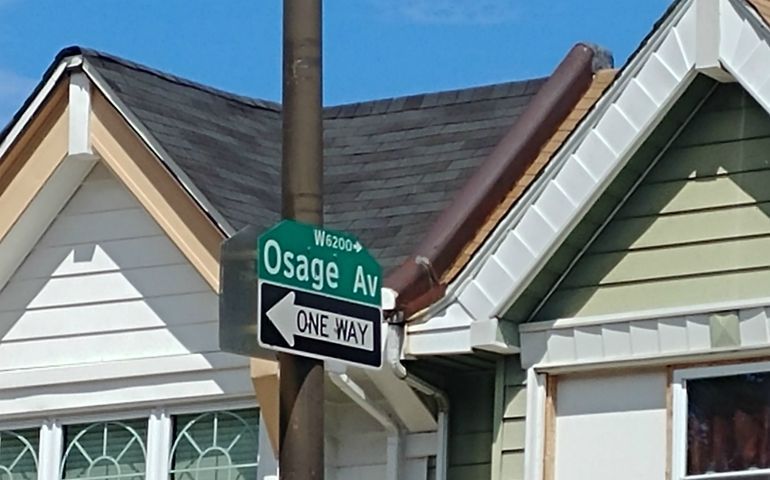 The 6200-block of Osage Avenue in Philadelphia (Mariam Williams)

Over the weekend, a historic marker to commemorate the 1985 MOVE bombing in Philadelphia was unveiled at the site of the tragedy. According to the Philadelphia Tribune, students from the Jubilee School, a private school based in Southwest Philadelphia, "studied the 1985 incident in which Philadelphia police dropped a bomb on a residential neighborhood, leaving 11 dead — including five children — and 61 rowhomes destroyed."

I attended a dedication ceremony, and the children's efforts filled me with hope. They initiated the proposal, walked through the neighborhood obtaining signatures for a petition to have the marker placed, interviewed survivors, residents, journalists and police, wrote poems for the occasion, and coordinated and emceed the dedication ceremony. When the Pennsylvania Historical and Museum Commission wanted softer, more positive wording for the marker, the children remained steadfast.

A friend of mine described the children as "great examples of compassion in action, guided less by rancor and more by an unfiltered sense of justice." Throughout the two years during which they studied the carnage and the decisions that led to it, the students' innate sense of justice was disturbed. They wrote in their application to the Pennsylvania Historical and Museum Commission, "Since there were no consequences to the police and city officials for their actions, it paved the way for government assistance to, and tolerance of, police brutality. The reason Pennsylvania needs to have this historical marker is that the MOVE bombing was one of the most extreme cases of police violence and government abuses of power. The marker can help spread awareness of a troubled history, which has been buried for so many years."

Death always touches more than the person it takes. Murder reverberates through generations of families. Police brutality and other state-sanctioned violence leave their marks on communities forever.

Some 32 years after police and city officials bombed the MOVE house, rarely does the state face consequences for its actions. Students, residents, activists, artists and writers dedicated the historic marker one week after a jury acquitted an officer of fatally shooting Philando Castile in front of his girlfriend and her toddler as he, at the officer's request, reached for his wallet. Within that same week, a jury cleared a Milwaukee officer of shooting Sylville Smith in the chest from point blank range, and the second trial of a former University of Cincinnati officer for shooting Samuel Dubose ended in a hung jury, again. All this as we wonder if officers will be charged for shooting and killing Charleena Lyles, 30 and pregnant, in front of her children on June 19.

At the ceremony, poet and scholar Sonia Sanchez recalled being "in a place called Georgia" preparing to give a lecture in 1985 when she saw news of the MOVE bombing on television. She said she called her children at home in Philadelphia and told them that when they go to school in the morning and everyone is debating what happened, "You must take a moral position."

When I do that, when I consider the burn scars still visible on the arms of MOVE bombing survivor Ramona Africa, when I think of children watching the news in 1985 and hearing that children just like them had died in a horrible way, when I think of the trauma the 4-year-olds will endure after witnessing Castille's and Lyles' killings, of how the victims will be missed, of voids that will never be filled, the moral position is clear: this violence is unacceptable. But as the children pointed out, when there are no consequences, the way is paved towards tolerating the unconscionable.

According to The Washington Post's shooting database, 112 black people had been fatally shot by police officers as of June 21, 2017.

[Mariam Williams is a Kentucky writer living in Philadelphia and pursuing a Master of Fine Arts in creative writing at Rutgers University-Camden. She is a contributor to the anthology Faithfully Feminist and blogs at RedboneAfropuff.com. Follow her on Twitter: @missmariamw.]

Transportation Ideas for the Papal Mass in Philadelphia