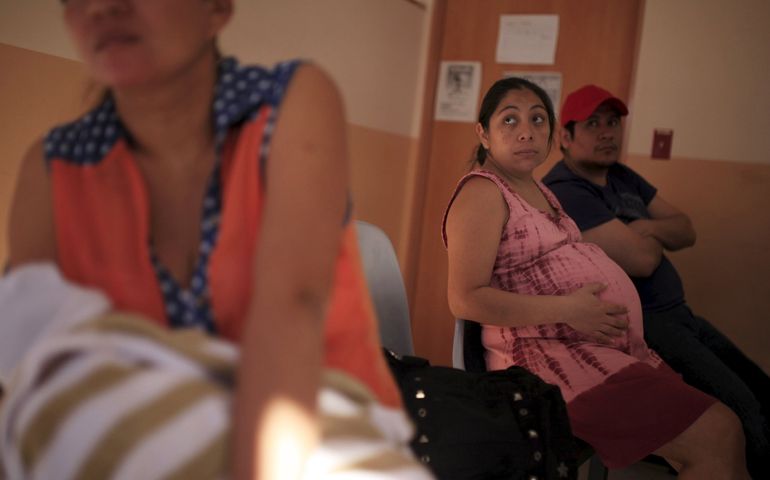 It's advice I imagine every girl in an industrialized nation receives at some point between menarche and that age at which everyone from family to total strangers start wondering why she doesn't have children. An unwanted pregnancy can derail plans for education, financial stability, and broader life ambitions, so "Don't get pregnant" is sound advice. But it's not always followed up with thorough or practical instruction on how not to get pregnant.

Such is the situation in many Latin American and Caribbean countries in light of the Zika virus's rampant spread throughout the region. Transmitted by the Aedes aegypti mosquito, the Zika virus has been linked to microcephaly, a condition that causes smaller craniums in newborns, and in some cases, brain damage. The World Health Organization recently declared the Zika virus a global health emergency. According to the New York Times, the organization estimates four million people could be infected by year's end. A generation of brain-damaged babies will have a far longer effect.

Zika infections are reaching epidemic levels in a region that is home to nearly 40 percent of the world's total Catholic population. And the Church prohibits abortion and the use of contraception.

This might not be such a problem if the governments of these countries were more distant from the Church in their policies. According to the Guttmacher Institute, 97 percent of women of childbearing age in Latin America and the Caribbean live in countries that either ban abortion in all circumstances, or allow it only in cases of rape, saving the life of the mother, or fetal impairment. Stat News reports that women who terminate pregnancies in El Salvador can face murder charges and prison sentences of up to 40 years. This is the same country where the Minister of Health recently urged women to delay pregnancy until the year 2018. It is also the same country where as many as 90 percent of pregnancies are unplanned.

While Latin American and Caribbean governments don't ban the use of contraception, they don't make it or sex education widely available, either. According to the Kaiser Family Foundation, use of contraception in the countries most impacted by Zika ranges between 33.6 and 75.7 percent, and there are high rates of disparity along income and rural/urban lines. The rate of unmet need -- that is, the rate of women who would like to delay or stop childbearing but are not using any method of contraception -- throughout the region is 10.4 percent.

And none of these statistics break down how many pregnancies are the result of sexual violence against women.

They do highlight that there continues to be an unfair burden on women when it comes to fertility and pregnancy but a lack of access to control over their own bodies. Where are the calls for men to stop raping women, to use condoms with consensual partners, or to get vasectomies (which can be reversed)? Where is the expectation for the Church -- an institution that I say has earned its honorable reputation for helping the poor, perhaps especially with medical care other institutions deny them because they can't afford it -- to help women prevent pregnancy until the spread of the Zika virus can be controlled?

The Zika virus isn't the first burden on women, and it won't be the last. The governments of these nations and the Catholic Church owe it to their citizens and followers to help women have healthy babies if and when they want to have them. It is time to give back to women control over their own bodies.