The cry of the middle class 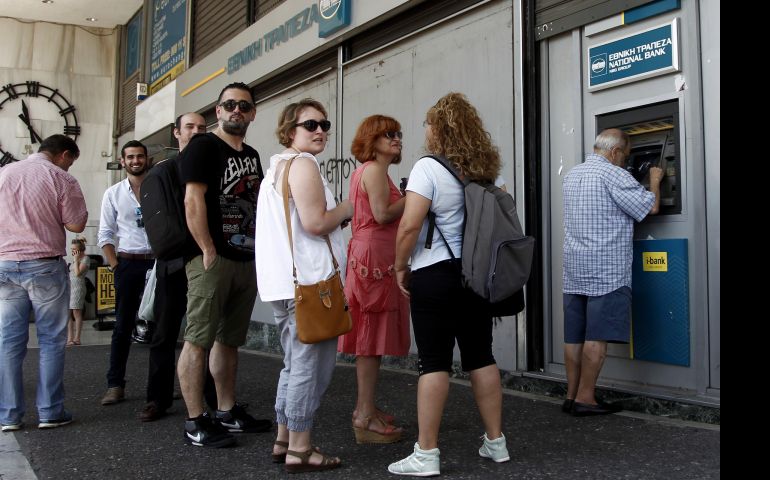 People queue to withdraw money from an ATM outside a branch of Greece's National Bank in Athens, Greece, July 6. (CNS/EPA/Alexandros Vlachos)

The Lord hears the cry of the poor. Could someone please listen to the middle-class?

Don’t get me wrong. The awful stories about governments bombing their own ethnic minorities (the Nuba peoples in Sudan) compete with sad facts about land-grabbing developers (the Paraguayan slum Banado Norte) and turn our ears to the cry of the poor.

Many hear. Many turn away.

But the very people and governments who turn away from the sufferings of the poor include those whose own stability and security are at risk. In fact, the vagaries of the world’s financial systems threaten a new chaos for those whose lives are more than distant from the lives of mountain people and slum dwellers in lands far, far away.

We’re talking about the middle-class. For example, think Greece.

Greece has been in trouble for years. Last month, it defaulted on its International Monetary Fund bailout. The country is in financial chaos as more and more people fall below the poverty level.

Greek banks limit withdrawals, government entitlements are at risk, and everybody is suffering. Only about half the working population has jobs and the state takes nearly half of wages back in taxes. Tax evasion is a common indoor sport. And a sinking Greece threatens to drag the European Union under.

The complexities of EU finance ministers’ discussions belie the fact that Greece faces collapse of its own fiscal Ponzi scheme. Too few people work and pay taxes to support too many government entitlements, mainly unemployment and pension payments. Greece cannot repay its debt because it does not generate enough revenue.

What to do? Maintain the entitlements and default on the debt? Or, reduce entitlements, raise taxes, and pay up?

As I said, the Ponzi scheme is collapsing. Can they fix it? Maybe.

The middle-class and the newly poor in Greece are surely hurting. The suffering in Greece mirrors the kaleidoscope of suffering in the Nuba Mountains and the Paraguayan slums. Surely, the terrifying insecurity of living in a war zone or on land that may be taken away differs from the threat of evaporating pensions, rising taxes and living costs, and fewer jobs, but at their root they have a single cause. They also have a single solution.

The situation in Greece will resolve, for the time being. But Greece’s troubles are available to most of the world. Whose economy is next? What relatively comfortable, highly middle-class nation next faces financial ruin?

And, what causes all this?

Some economists say Greece itself has a trade deficit. It buys more than it can pay for. It’s not the only one. Pope Francis said on his recent flight back to Rome that Latin America suffers a “colonialism of consumerism” that “upsets the balance of the domestic economy and of social justice, as well as physical and mental health.”

He has a point. In fact, the world has been colonized by a consumerism that fosters greed. Somehow erasing ethnic heritage, taking land, or controlling money and goods bring a sense of security.

That sense of security, borne by consumerism, can cause people, groups, and entire nations to think they are on their own in this world.

They are not. They’re just not.

Hence the solution. The Nuba peoples in Sudan and the Paraguayan slum dwellers of Banado Norte know it and live it. They organize and they help each other. Their security is in each other.

The nations that foster consumerism might take note, and perhaps even get together to help each other out. The European Union seems to be figuring this out, at least somewhat.

Except when outright greed gets in the way, there is enough to go around.

[Phyllis Zagano is senior research associate-in-residence at Hofstra University in Hempstead, N.Y. She will speak Sept. 19 in Philadelphia. Her newest books include Mysticism and the Spiritual Quest: A Crosscultural Anthology and Women in Ministry: Emerging Questions about the Diaconate.]

The cry of the middle class

Brexit: Should I stay or should I go?

Amid Brexit, Europe's church navigates competing perspectives over the future