The future of the planet 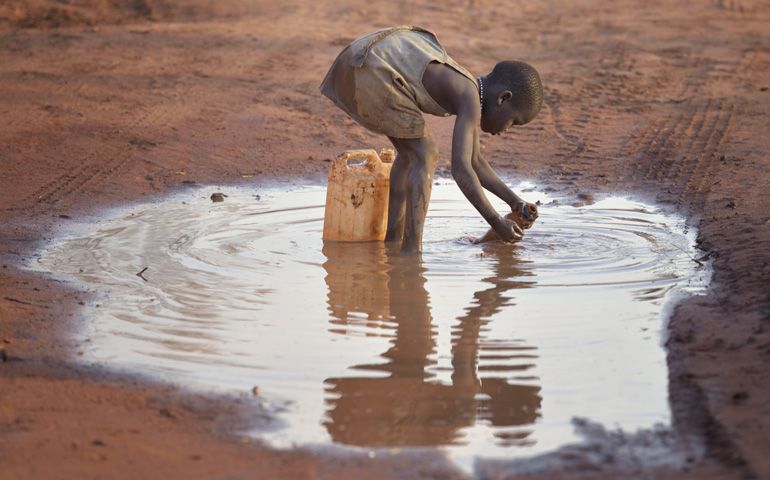 A girl fills a container with muddy water April 3 in the Ajuong Thok Refugee Camp in South Sudan. (CNS/Paul Jeffrey)
This article appears in the Francis: The Environment Encyclical feature series. View the full series.

Awful fact: By 2030, half a billion people will be practicing open defecation. That's an improvement.

Half of them are female.

The United Nations presented its Millennial Development Goals in 2000. A recently released UNICEF report, "Progress for Children," surveys successes and failures in meeting those goals. It is a pretty dismal read.

For example: Despite all efforts, 1 billion people live in extreme poverty, nearly half under the age of 18; female youths are almost twice as likely to be illiterate as their male counterparts; girls account for nearly two-thirds of adolescent HIV/AIDS infections. These statistics show improvement. Things may be getting better, but things are getting worse for the poorest, especially for women and girls.

So as madmen wander around beheading and blowing up people in their demented search for both world domination and the blessings of their God, little girls in simple villages have no bathrooms, no education, and exponential chances of dying of AIDS.

Every culture has its priorities. The developed West is beginning to understand it must respect the planet. But it is one thing to "go green" and quite another to respect the human person. Apparently, it is even more difficult to respect the female human person. The stupidities of the developed world -- the noise that masquerades as music, the intense interest in epicurean delights, the unending search for pleasures of every description -- turn eyes and minds from the needs of people, real people, who are suffering.

Some say the answer is fewer people, that more and better means of birth control would solve the problem. Some say there is already enough food and water, just no adequate ways to distribute it. Some say it's because of the Jews, or the Muslims, or the Christians, who want to control wealth and power. None say it is because of their own selfishness and narcissism.

With all the finger-pointing going on, how many look in the mirror and say it is their own fool fault?

And when folks raise their voices to lay blame, who listens? Pope Francis' lovely encyclical Laudato Si' in no uncertain terms connects abuse of the environment with abuse of the poor. Francis cites no fewer than 16 world bishops' conferences plus Ecumenical Patriarch Bartholomew of Constantinople as stating before him in one way or another that the earth and its people are on a collision course. The chorus speaks: Something's got to give.

Who is listening? The encyclical, leaked as it was by an anti-Francis Italian journalist, lost what punch it might have had both because of the early leak and because it was not properly timed to catch the world news cycle. (Note to pope: A Thursday afternoon on the cusp of summer is not the best time to catch major journalists at their desks.) There may have been climatologists advising in the encyclical's preparatory stages, but after all was written and done, news coverage came the Friday before the Northern Hemisphere's summer solstice.

Where do we go from here? The United Nations has new benchmarks called Sustainable Development Goals to work at for the next 15 years. Francis' message is one answer to UNICEF's dismal predictions. The pope wrote in Laudato Si' that he hoped to help "bring the whole human family together to seek a sustainable and integral development, for," as he wrote, "we know that things can change."

[Phyllis Zagano is senior research associate-in-residence at Hofstra University in Hempstead, N.Y. She will speak Sept. 19 in Philadelphia. Her newest books include Mysticism and the Spiritual Quest: A Crosscultural Anthology and Women in Ministry: Emerging Questions about the Diaconate. Her email address is pzagano@ncronline.org.]

World | The future of the planet

The encyclical is first and foremost about human relationships