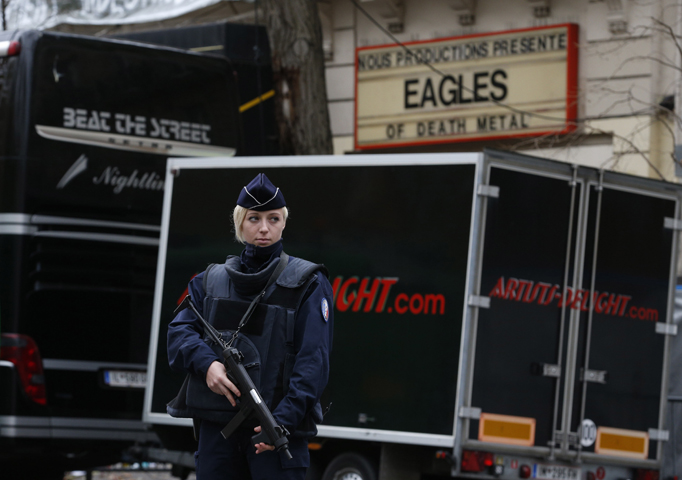 A policewoman stands guard outside the Bataclan music hall in Paris Nov. 16. The Islamic State claimed responsibility for the Nov. 13 attack on the hall. (CNS/Paul Haring)

As an evil slime spreads over so much of the world, we stare in amazement. Where did this come from? How can this happen? Who is guiding this?

The Paris numbers are sickening: 132 dead and 430 injured. Perpetrators: Daesh, or ISIL. Then there is Kenya, where 147 died and 79 were injured at Garissa University College. Perpetrators: Al-Shabaab.

There are more. During the past few months, suicide bombers left 43 dead and 240 wounded in Beirut, Lebanon; 102 dead and 508 wounded in Ankara, Turkey; 57 dead and an unknown number wounded in Baghdad, Iraq.

As ISIL, Al-Shabaab, and similar groups of hooligans run rampant through civilization, they are joined by young men (and, increasingly, young women) bent on changing, ending, or stopping whatever it is about Western culture they believe is infecting their own.

On the one hand it is about some crazy warfare, on the other it is rooted in a disregard for human life.

There are equally horrific smaller events.

We cannot, for example, forget the 8-year-old boy who beat a 1-year-old to death in Birmingham, Alabama not that long ago.

You have your own examples.

As more and more instances of violence against persons populate the newspapers and airwaves, two things happen. First, of course, we are horrified. Second, however, we are ever-so-slightly numbed to the facts of evil. Another day, another murder, or rape, or bombing, or shooting, or. ...

None of this is new. In the 18th and 19th centuries, "The Newgate Calendar" morphed from a list of executions at London’s Newgate prison to a popular collection of grisly biographies and essays against all manner of crime. Subtitled "The Malefactors’ Bloody Register" it published, for example an illustration of the May 13, 1798, murder of 5-year-old Susan Matthew by 10-year-old William York.

If line drawings in popular works designed both to titillate and teach caused more mayhem than they stopped a few hundred years ago, we will never know. But today, we do know there is a direct connection between much of what is published and broadcast to increasing horrors large and small.

We can debate the causes. We can blame media, music, consumerism, and a host of other things for desensitizing the perpetrators. For them and many others, the anger on the airwaves gives daily doses of new toxins. What we cannot debate are the effects of their actions. New fears overtake civility. New insecurities surround us all.

In each and every instance both recent and in the distant past, someone’s son or brother overcame whatever natural reticence he may have had. Whether personal or “professional,” something curbed whatever positive traits existed in each killer’s nature. Was it a call to righteousness combined with news reports of prior "successes"? Was it the urgings of social media? Was it the mere thrill of ending human life?

Each violent act has a double effect.

And then come the cries of "Shut the borders! Don’t let terrorists in."

So as Kenya and Lebanon and Iraq and Turkey and France are torn apart by random killings, and war in Syria produces refugees by the hundreds of thousands, country after country and state after state says it will not receive the ruined lives of so many people, so many families. Now the terrorist packs of self-important angry young men enjoy the secondary results of their mayhem.

The families -- whether those of refugees or of murdered children -- will never recover.

[Phyllis Zagano is senior research associate-in-residence at Hofstra University in Hempstead, N.Y. She will speak February 9, 2016 at St. Michael’s College, Vermont and May 6, 2016 at the University of St. Michael’s College, Toronto. Her books include Women & Catholicism: Gender, Communion, and Authority and In the Image of Christ: Essays on Being Catholic and Female.]