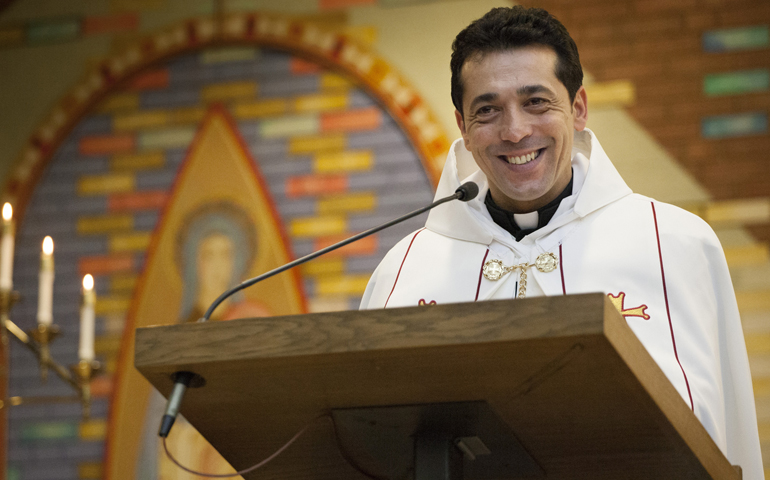 Fr. Wissam Akiki, who has a wife and daughter, Feb. 27, 2014, at St. Raymond's Maronite Cathedral in St. Louis. He was the first married man to be ordained a priest for the U.S. Maronite Catholic Church. (CNS/Lisa Johnston, St. Louis Review)

They haven't ordered team jerseys yet, but two sharply divided sides are lining up in the married priest debate.

Supporters of a wider married priesthood in the Roman Catholic church argue for the whole church's tradition of married clergy, never abandoned by most of the 23 or so Eastern Catholic churches. The other side points to studies of failed clergy marriages and says married priests are just too expensive.

He was arrested at the San Diego airport in January. According to the charges, he had expected to meet a contact in Tijuana, Mexico, who would sell him young girls under age 4 with whom he planned to have sex.

Can we maybe find ways to make professional ministry a more competitive profession?

I'm all for priestly celibacy. I know the church called for it in the fourth century and gradually enforced it as a Western rule during the past millennium. But a married priesthood does not give me heartburn. We need more priests.

In fact, I think a wider married priesthood should be discussed by the entire church. Apparently, Pope Francis agrees. Some say the next synod will take up the topic, but if it is another all-male synod, they are still missing the point.

Latin church hierarchs have little contemporary experience with marriage, let alone married priests. The few married former Anglican priests are often more Roman than Rome. The advantage to convert married priests is that they are mostly lifelong ministers in stable marriages who somehow managed to support themselves. Some bishops say they worry about the impact of ministry on family life, but hundreds of years of married Christian clergy seem to support the argument for married Catholic priests.

Bishops often do not think they can afford a married priest and family taking up a rectory, but studies show costs are about the same for married and celibate priests. Further, there are plenty of full-time chaplaincies in hospitals and nursing facilities, schools and colleges, convents and retreat houses. There are 400-500 open priest assignments in the Archdiocese for the Military Services alone.

How would it work? An ordained person cannot get married, but a married person can be ordained. Would young men enter seminary and then defer ordination until after marriage? Would they date while in seminary? At least one Eastern Catholic church allows men to be ordained as deacons, then marry, then be ordained as priests. That could stop ill-advised marriages, because the deacons could minister as they looked for spouses, and the prospective spouses could decide on how ministry might impact their marriage.

Clearly, it would be good to have a larger pool of applicants. Would young married men be attracted to the vocation? How would priesthood affect family life? Would older married men be candidates? Here bishops point to some unhappy experiences with deacons. Would the church return to ministry priests who left to marry? And what about women?

There needs to be some way to get more and more qualified persons into ordained ministry, but married priests really could be a train wreck. Reinforcing the all-male clerical caste could create more priests than necessary if a married priesthood that ignores even women deacons clears out the pews.

[Phyllis Zagano is senior research associate-in-residence at Hofstra University in Hempstead, N.Y. She will speak May 6, 2016, at the University of St. Michael's College, Toronto. Her books include Sacred Silence: Daily Meditations for Lent and In the Image of Christ: Essays on Being Catholic and Female.]