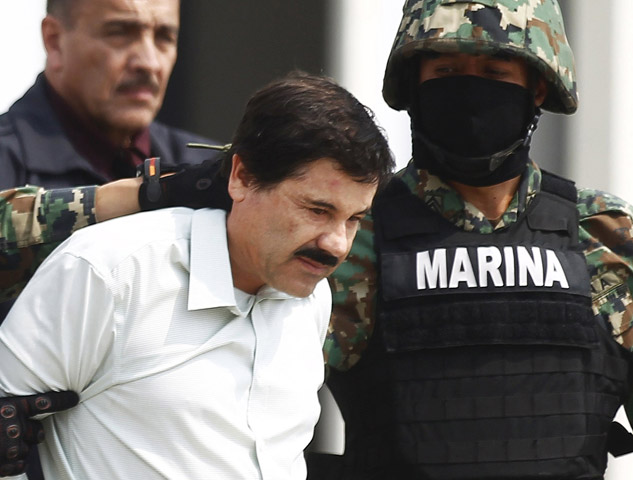 So they captured the Mexican drug lord, El Chapo. When the back slapping stops, maybe folks will consider the very real possibility that little will change and that media glamorize the drug trade.

In one corner, President Obama signs a measure to expand background checks for gun purchasers and says Mexico is our friend. In another corner, Donald Trump decries background checks and that the U.S.-Mexico "border fence" should be expanded. And El Chapo becomes a TV star.

Border fence: Approximately one-third of the nearly 2000-mile U.S.-Mexico border already has a wall, currently 300 miles of vehicle fence and 350 miles of pedestrian fence in addition to piecemeal efforts to keep smugglers off private land. Mexican drugs continually flow into the U.S.

Is anybody paying attention? A recent Pew study shows more Mexicans are heading home than coming into the U.S. It's not about immigration. Immigrants are fleeing poverty, violence, disease and drug cartels. They are not all violent criminals, Mr. Trump.

They are poor. Their lives are caught up in an international scam involving drugs, guns and money. In North America, drugs are coming north and guns are going south. People are dying on both sides of the border.

The U.S. State Department lists Mexico as a major source of illegal drugs and chemicals, and as a major money-laundering country. As of 2010, in Mexico folks were growing 40,000 acres of poppy and 35,000 acres of marijuana. Mexican drug sales to the United States range from $19 billion to $29 billion annually. Some friends.

In the other direction, these are some American weapons flowing into Mexico: semi-automatic AK-47 rifles, semi-automatic AR-15* rifles, Barrett M82 rifles, fragmentation grenades and grenade launchers, all likely used by drug cartel henchmen and other criminals to enforce their sundry ways. U.S. government statistics show that nearly 70 percent of the 121,073 firearms confiscated in Mexico between 2008 and 2013 were U.S.-made or imported. The numbers are all over the place, but the fact is that thousands of people were murdered in Mexico, many in some sort of drug-related violence.

El Chapo's arrest may have damaged the Sinaloa Cartel, opening marketing opportunities for others, but it did little to erase the broadcast mix of celebrity and drama surrounding him. Television stations around the world repeatedly showed the Mexican Naval Infantry Force (marines) storming his hideout and reporters frog-walking through tunnels to his sewer escape hatch. We learned that American actor-activist Sean Penn and a Mexican soap opera star met with El Chapo to discuss a movie about his life. We saw El Chapo's plaintive explanation that he grew up terribly poor and only needed to earn a living. We saw it all, in color, over and over and over again.

I blame media here. Some years ago Pope Francis decried the fact that a few points up or down on the stock market made major news, while actual human tragedy did not. Now we are faced with Rolling Stone magazine's fanciful video showing El Chapo's life as a simple peasant-turned-businessman story.

It is not. He is not. The real story is about lives destroyed by Mexican drugs and American guns, the poor men, women and children caught in the web of drugs, guns and money. The real story is not about politicians and executive orders and walls.

The real story is about poverty. The posturing must stop.

*An earlier version of this column listed an inaccurate rifle name.