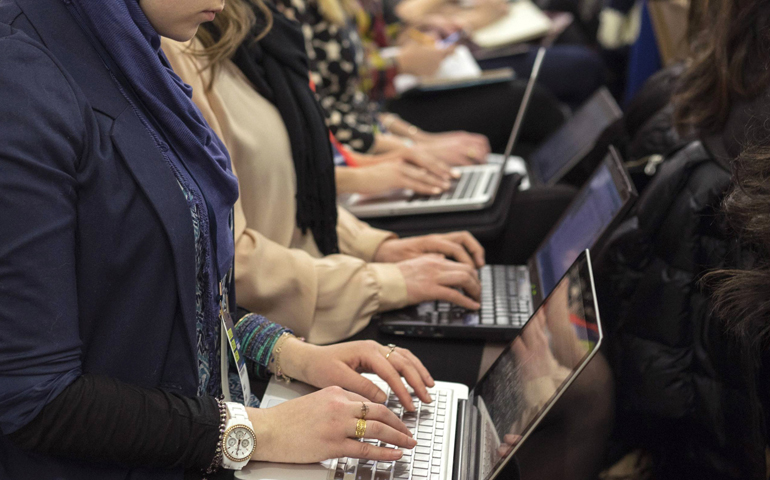 Attendees use their computers during a seminar at Social Media Week in New York, in this 2014 photo (CNS/Zoran Milich, Reuters)

The next schism isn't down the road somewhere. It is already here. The proponents are lined up in a serious face-off, their team shirts emblazoned "Pre-Vatican II" and "Post-Vatican II."

The "Pre" folks are the all Latin, all the time minority, solemnly preferring Bach during liturgy. The "Post" people comprise the rest of us, dutifully singing St. Louis Jesuits' songs and even (gasp!) exchanging handshakes at the kiss of peace.

The fissure is getting worse, as more and more younger people come along yearning for the good old days (before they were born) when everything was orderly, everything had its place, and the rules were followed.

Meanwhile, older church professionals who adjusted to vernacular liturgies and who incorporate mercy into their understandings of justice are retiring daily. They are being replaced, where they are replaced, by people whose theological education is complemented by self-appointed Internet theo-bloggers whose opinions grow from the conviction that anything that happened since 1965 is anathema.

That is probably why Fr. Thomas Rosica, a Canadian priest and CEO of Salt and Light Catholic Media Foundation took on the so-called Catholic blogosphere several weeks ago, as he delivered the keynote address at the Brooklyn, N.Y., diocesan World Communications Day events. Rosica reported that many people say to him that "we 'Catholics' have turned the internet into a cesspool of hatred, venom and vitriol, all in the name of defending the faith!"

It is true. The internet, as Rosica said in Brooklyn, "can be an international weapon of mass destruction, crossing time zones, borders, and space."

Rosica, whose attorneys sent a "cease and desist" letter to a Canadian blogger who attacked him with a combination of character assassination and misinformation, charitably reported that "Often times the obsessed, scrupulous, self-appointed, nostalgia-hankering virtual guardians of the faith or of liturgical practices are very disturbed, broken and angry individuals, who never found a platform or pulpit in real life and so resort to the internet and become trolling pontiffs and holy executioners!"

I agree. Because they never did or at least no longer do find space in legitimate media, the self-appointed pontiffs build internet and other social media followings for their unfiltered personal attacks on anyone who strays beyond the boundaries of the church of their imaginings. In unedited postings, they freely criticize anyone -- from the pope on -- who carries and/or lives the Gospel in the "wrong" way.

I hope my own experience with these type persons is atypical. While Rosica's attorneys demanded his attacker stop assassinating the priest's character, my own university actually banned a nasty blogger from campus and any online activities some years ago, when he tried to disrupt one of my online seminars. The idea was to keep him away from me. Aside from denigrating my scholarship and defending his personal version of the faith, my attacker also brags about carrying a gun.

That is where the schism is now. It is no longer butchers and bakers having street fights over Real Presence, or any other theological issue. It is shoot-from-the-hip typists whose access to bandwidth lets them threaten your livelihood and, implicitly at least, your life. What they say is true because they say it, no matter their lack of credentials or, possibly, sanity.

The slow and steady recovery of church life during the papacy of Francis is marred by these true schismatics, who denigrate the pope and everything he says and does, and who long for the good old days. These bleating word processors have influenced, are influencing, and will influence otherwise kind people, who think verbal brickbats and worse will bring the church "around." Around to what?