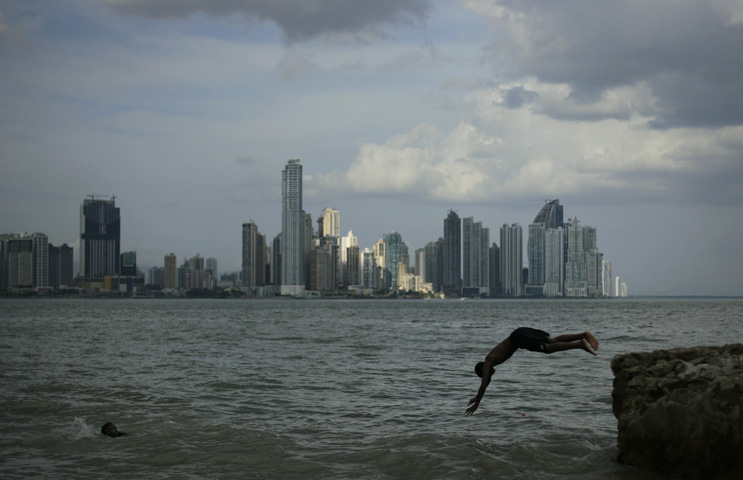 The skyline of Panama City is seen in the distance as boy jumps into the sea in a January 2011 file photo. (CNS/Juan Carlos Ulate, Reuters)

About a quarter of Panama's four million souls live below the poverty line, plagued by diarrhea and malnutrition. Meanwhile, a giant Panamanian law firm manages the world's largest tax evasion business and money laundry for the rich.

Think about it as you prepare your taxes this season and as the world learns how the rich and powerful have been hiding money during the past 40 years.

Recent Panama Papers revelations already cost the prime minister of Iceland his job -- the papers revealed some apparent funny business regarding failed Icelandic banks. Only time will tell whether other world leaders will fall over their off-shore shell companies and hidden assets.

When the German newspaper Süddeutsche Zeitung, the International Consortium of Investigative Journalists, and one hundred other news organizations began mining the 11.5 million leaked records of the Panama-based law firm Mossack Fonseca, they had to know they were on to something big. Rather, we might say something huge. The database trove was about 2.6 terabytes deep, enough to fill nearly 3,000 CDs. More than 370 journalists from 76 countries reviewed documents. They found a lot.

The files list more than 15,000 shell companies controlled by world leaders and others, including the suddenly ex-prime minister of Iceland, the prime minister of Pakistan, and the King of Saudi Arabia. The presidents of China and Ukraine are in the electronic hot seat as well. Tentacles of corruption reach out equally to Russian President Vladimir Putin and approximately 140 politicians and public officials worldwide.

The team of journalists counted 214,488 offshore "entities" -- bank accounts, companies, other vehicles of ownership -- hiding billions of dollars of assets, mostly in big banks in Luxembourg, Switzerland, Monaco and the Channel Islands. They found 14,153 owners worldwide.

The connections between political power and money are sickening. Politicians around the globe tout their care for the poor, their interest in free education and health care, their deep interest in better, cleaner, safer cities and rural areas now devastated by poverty. They wring their hands and shout their speeches, claiming this or another solution to the disease and death that stalk the poor.

Meanwhile, they feast their bank accounts on legal schemes that avoid their paying taxes to support the public trust. Bluntly, what they say and what they do collide in noisy contradiction. Taxes must help the poor, they chant. So long as it's not their taxes, they think.

Such is the peek into the first-class cabin, where wine and whiskey flow, and filet mignon comes medium rare. Would you like some Béarnaise sauce on that, sir? Yes, we use Champagne vinegar.

I hate to say it, but Donald Trump has a point. Legal means of avoiding taxes are ruining not only the U.S. economy, but the world economic system as well. Powerful political leaders already know that. The big players in the Panama Papers seem to be in China and Russia, although several countries seem to have at least one tax-dodging Mossack Fonseca client. And all countries have individuals with deep pockets who support their politicians.

Oh, the super rich pay taxes, certainly enough to keep mid-level bureaucrats off their backs. But it is the members of the aching middle class in every economy who fill out tax forms year after year and who truly support their governments and government entitlements. The perilously poor contribute taxes here and there when they buy gasoline or other needed goods and services. They may or may not have access to government entitlements, depending on the shoals and narrows of bureaucracy they must navigate to get help.

[Phyllis Zagano is senior research associate-in-residence at Hofstra University in Hempstead, N.Y. She will speak May 6, 2016, at the University of St. Michael's College, Toronto and Sept. 24, 2016, at The Catholic University of America, Washington, D.C. Her books include Women Deacons: Past, Present, Future and In the Image of Christ: Essays on Being Catholic and Female.]