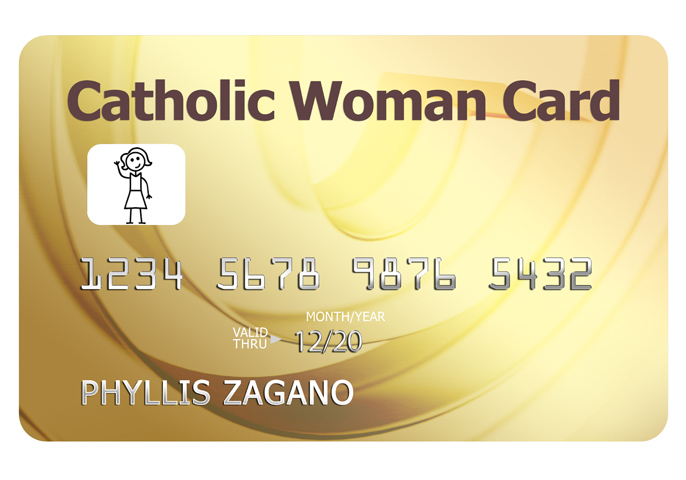 I am getting more than tired of Donald Trump's comments about women, especially about his rival's so-called "woman card." Aside from calling women bimbos and manipulators, he has said women are after his money and his power.

A little while back, FutureChurch co-founder Christine Schenk ran a column in these pages about three women who seek diaconal ordination in the Roman Catholic church. With nearly 600 comments and counting, three things are obvious: there are many, many sincere women out there who want to serve the church in an ordained capacity; there are many, many sincere folks out there who do not understand the distinction between priests and deacons; and there is at least one looney-tune out there who thinks racist, anti-female jokes are just hysterical.

Let's start with the looney-tune.

I cannot count the comments like this one, since deleted from Schenk's column:

Ho Li Cau (profanity edited out of the name): Confushus say: a bitter woman is rike a bitter vegetabre - good for you but onry in smarr doses! Many raffs, these feminists.

The inherent problem with blog comments is they are essentially anonymous. Few people register honestly, preferring to lob tomatoes from behind a fence of anonymity. Unfortunately, these type of comments disrupt what could be a productive conversation.

The sincere conversation in this case, the question of restoring women to the ordained diaconate, circles around two points: whether women are worthy subjects of the sacrament of order; and whether the living church today can stand the thought of a vested woman proclaiming the Gospel.

Some opinions have been rendered over the centuries about whether the Holy Spirit is actually capable of gracing women in the sacrament of order. The negative opinions seem moot because liturgies used to ordain women include the epiclesis, the calling down of the Holy Spirit on the one ordained. We must assume the ordaining bishops knew what they were doing and intended to do it. Are the naysayers suggesting the Holy Spirit left the ceremony, shrieking "I can't do it! It's a girl"?

Agitation to the point of vitriol surrounds the thought of vested women, presumably because these women would be at the altar inside the sanctuary. Why is this? We need not recite the medieval superstitions about women and blood, but we must acknowledge they perdure to this day. The fights over altar servers, even lectors in some dioceses, speak to the suggestion that a woman cannot be near the holy.

What is "the holy"? Negative comments surround the altar like a battlement; positive comments are amidst the people.

Finally, but firstly, there are many sincere women out there who wish to serve the church in the ordained role of deacon, as did so many women in early and medieval times, in monasteries and outside of monasteries, in the East and in the West.

That the former president of the Canadian Conference of Catholic Bishops, Archbishop Paul-André Durocher, brought the question of women deacons to the October 2015 Synod of Bishops on the family attests to the fact that there are serious hierarchs who see the serious need, in their own territories and in others, for sacramental ministry by women.

So, what happens when you try to talk about women in the diaconate? Some say the call to restore women to the ordained diaconate is a power play. Others say it is about money, and deride women who wish to earn professional salaries for professional ministry.

I am aware that most deacons serve voluntarily. In fact, since the early 17th century and even earlier, men and women religious self-funded their "diaconal" ministries. These religious catechized and fed the poor, housed the homeless and abandoned, and built the hospitals and schools and social service institutions that even today form the ministerial face of Catholicism. That their numbers are declining, especially in developed countries, is no commentary on the need. Rather, it is commentary on the bureaucratic grasping for power and money by those hierarchs who dismiss women in much the same tone as Mr. Trump.

[Phyllis Zagano is senior research associate-in-residence at Hofstra University in Hempstead, N.Y. She will speak May 6, 2016, at the University of St. Michael's College, Toronto; May 18, 2016, at a FutureChurch Teleconference; and Sept. 24, 2016, at The Catholic University of America, Washington, D.C. Her books include Women Deacons: Past, Present, Future and Women Deacons? Essays with Answers.]