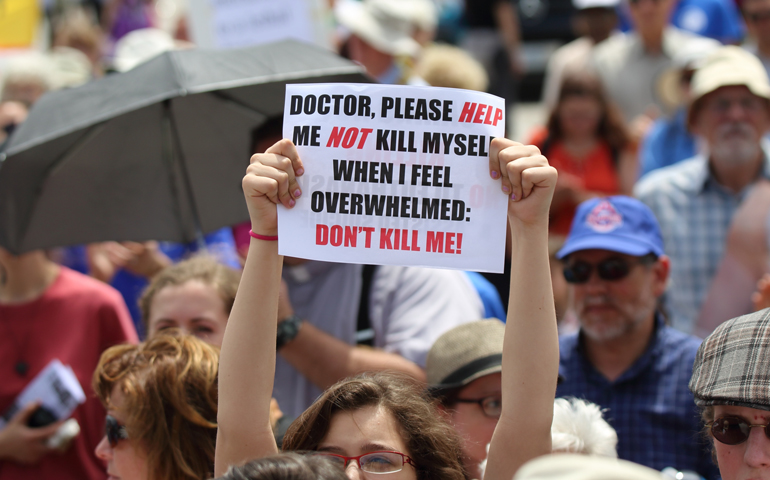 A woman holds up a sign during a rally against assisted suicide in 2016 on Parliament Hill in Ottawa, Ontario. (CNS/Art Babych)

First the 1935 book. Then the 1969 movie. She cannot kill herself. He kills her, because she asked him to. As he explains, "they shoot horses, don't they?" — giving the story its title.

Is it assisted suicide? Or is it murder?

To be sure, so-called medically assisted suicide is catching on. It's legal in Belgium, Canada, Luxembourg, the Netherlands and Switzerland. In the United States, no federal law forbids it and six states circumnavigate their own laws by allowing "medical aid in dying." In these, people can overdose with prescribed drugs. At least 17 additional states have active pro-euthanasia movements.

That may be why The New York Times had a front-page article about an American in Canada who "wanted his last supper to be one he so often enjoyed on Friday nights when he was a young Catholic priest — rotisserie chicken legs with gravy."

No matter. In page after page, the newspaper extolls John Shields, whose "control over the terms of his death made him feel empowered." After all, the Times breathlessly reports, he "had packed five lifetimes of service into one: … civil rights activist, a social worker for children, the head of British Columbia's biggest union and, most recently, the savior of a floundering (sic) land trust."

The article is as seductive as it is congratulatory. Here is Shields, surrounded by friends as a physician administers the final doses; in 13 minutes, he is dead. Here is Shields, laid out under the swaying Douglas firs, birds chirping, candles flickering as friends recall his life. Here is Shields, on the front page of The New York Times, a propagandist's dream come true.

A recent Gallup Poll found 68 percent of people in the United States think physician-assisted suicide is a good thing. In the days following the Shields piece, few letters appeared in the paper's Letters section warning that the polity think twice, maybe three times, before voting its support of the old Hemlock Society, now renamed Compassion & Choices. A total of 826 comments found their ways to the Times online Comments section, most brimming with words like "brave," "amazing," "moving," and "sensitive." Only one person, from the Netherlands, wrote, "If this narrative becomes normative, be prepared that the whole way we will be dealing with illness, vulnerability, old age, and coping will be totally different 20 or 30 years from now."

That is the problem with the assisted suicide movement, as it moves along its slimy trail from culture to culture, from country to country. Today, all sorts of legalities supposedly guard the individual. Typically, two doctors must assert the individual's free choice and approve the killing. It all must be so neat and tidy.

Not long ago in Belgium the lay board of the Brothers of Charity Group said it would allow euthanasia in its 15 psychiatric centers, which house over 5,000 patients annually. In 2016, one of its centers was fined 6,000 euros for preventing lethal injection of a patient. Over the objections of the Brothers' superior general, and now under scrutiny by the Vatican, the board's published criteria for assisted suicide for a mental patient seem to follow the law exactly: 1. The patient is of age or is an emancipated minor; 2. The patient makes the request independently; 3. The patient has made due consideration, including a clear choice not to go on living with unbearable suffering, and the patient has properly assessed his or her situation; and 4. The patient's request is clear and persistent.

To be sure, the Belgian bishops and the Vatican are not happy about the turn of events, but what can they do? The people of Belgium think assisted suicide is just fine, even for psychiatric patients.

Not that long ago, a judge found a young Massachusetts woman guilty of involuntary manslaughter because she texted and talked her friend into suicide. As the prosecutor told it: "She was in his ear, she was in his mind, she was on the phone, and she was telling him to get back in the car even though she knew he was going to die." Her online defenders crack open the door between assisted suicide and murder: "Maybe it's a just a girl who was incredibly misguided by ignorance and the delusion that somehow it really would be better for her boyfriend if he were dead."

I am quite sure she believes that. I am also quite sure the Brothers of Charity Group thinks allowing mental patients to choose death is a good thing. I am equally sure that John Shields' friends and family think they participated in a great and wonderful event. And I am sure The New York Times will continue pushing its assisted suicide agenda under the guise of "news."

Yes, they shoot horses. But this is not about putting down lame horses. It is about human beings.

Many years ago, speaking about life issues, John Cardinal O'Connor told me: "The life you save may be your own." Think about it.

[Phyllis Zagano is senior research associate-in-residence at Hofstra University in Hempstead, N.Y. Her books include Women Deacons: Past, Present, Future and Women Deacons? Essays with Answers.]