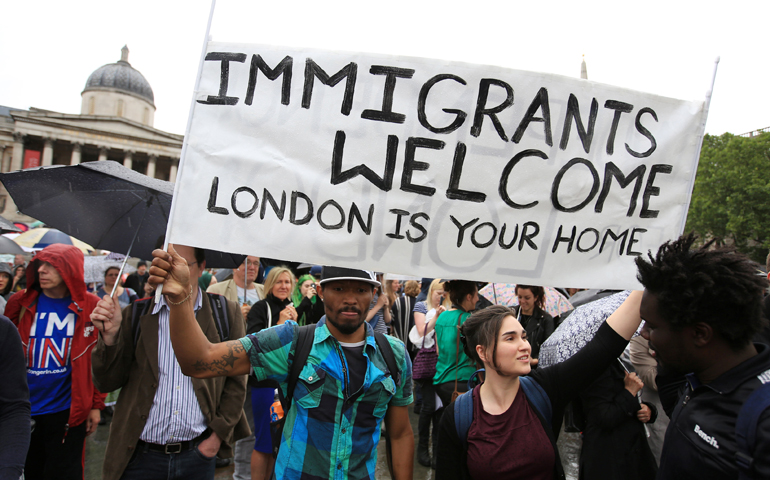 As Pope Francis and Orthodox leaders continue a walk toward unity, Great Britain is leading the charge out the door of the European Union. Papal meetings with Orthodox patriarchs encourage hopes of unity. Brexit seems aimed at breaking up the European Union.

Catholic-Orthodox reunification is a goal of Francis'. In February, he met with Russian Orthodox Patriarch Kirill of Moscow. In April, he was with Orthodox Ecumenical Patriarch Bartholomew of Constantinople. In June, he visited Armenian Apostolic Catholicos Karekin II. Union? Not yet. Francis himself -- or at least the concept of papal primacy -- is the historic sticking point.

As for the European Union, the Brexit vote was just that: a vote and a very close vote: 51.9 percent for and 48.1 percent against. Now the Parliament is faced with a petition from three million people asking for a re-vote. The prime minister said he would resign if Brexit passed, but not before a new government comes in in October. Meanwhile, the world's financial markets are on a roller coaster ride, and no one really knows what's next.

Question: Why can't they all get along?

Sound familiar? Like Jesus, the churches and the world are in the desert, and they have been there for a very long time. What will fix things? What keeps them from fixing things? Why won't they fix things?

Start with pride. People trace the original Catholic-Orthodox split to 1054, when the Roman pope excommunicated an Eastern patriarch. Not to be outdone, the patriarch excommunicated the pope's legates, and the fight was on. They said it was over a theology. It was about power. Today, there are at least 14 churches of Eastern Orthodoxy, all led by patriarchs, and some 23 Eastern Catholic Churches in union with Rome.

Hot on the tail of pride is honor. As pope, Francis has 1.2 billion followers. The Orthodox have far smaller numbers: there are maybe 300 million Orthodox in total. Each Orthodox church has a patriarch. The sticking point to reunification is the primacy of the pope in Rome, who claims the primacy of Peter. It's not about theology. It is about who is in charge of what.

Then of course, there is the business of money. Rome is wealthy. The majestic international corporation that is the Catholic church has a lot of it, as well as land, art, buildings, and various intellectual properties. That does not translate into your local parish or diocese having a bulging bank account. But you need money to keep the clerical organization running and to maintain the power that supports the national and cultural individuality of all the churches involved. Orthodoxy does not claim such riches.

What does this have to do with the prospective meltdown of the European Union? The single monetary unit -- the euro -- symbolizes an unhappy economic marriage in which Great Britain never took part. The U.K. joined the European Union, but kept its own pound sterling. The cultural stew created by ending economic borders still angers they who wish to protect their individuality. The seeming lack of political control seems to reduce individual national power and move it toward the Brussels headquarters of the European Union.

That would be riches, honor, pride.

The complexities of the moving pieces present one question: is there more to unify them, or more to separate them?

The deeper question, perhaps asked by the people who are asking for a Brexit re-vote, and certainly asked by Francis is: what is more important? Unification or separation?

I somehow think we all need to ask that in many ways every day.