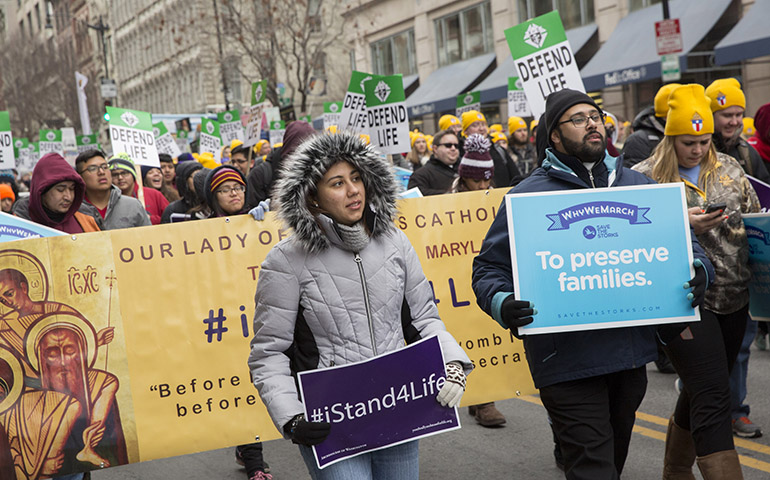 Parishioners from Our Lady of Sorrows Catholic Church in Takoma Park, Md., march during the March for Life in Washington Jan. 22. (CNS/Jaclyn Lippelmann, Catholic Standard)

Due to the blizzard that hit the mid-Atlantic, my bus never made it to the 43rd March for Life in Washington, D.C. But thousands of others were able to brave the snow and wind to witness to the dignity of unborn human life, and to protest the gravely immoral practice of legal abortion in the United States.

The following day, Jan. 23, thousands of people from western states participated in the 12th annual Walk for Life West Coast in San Francisco.

And throughout the U.S. various other events to protest abortion and defend pre-born life were held on, or shortly after, Jan 22 -- the infamous anniversary of the Jan. 22, 1973 Supreme Court dual decisions of Roe v. Wade and Doe v. Bolton, which effectively legalized abortion on demand for all nine months of pregnancy.

As reported by National Right to Life, surgical abortions kill over 1 million unborn babies in the U.S. every year according to the Guttmacher Institute -- a former affiliate of the abortion chain Planned Parenthood.

And when the widespread use of birth control pills is considered, the number of estimated abortions increases tremendously. This is because birth control pills not only act to keep sperm and egg from uniting, but when that mechanism fails, they also have an abortive capability which produces a "hostile endometrium, which presumably prevents or disrupts implantation of the developing baby," according to Dr. William F. Colliton, Jr.

The American Life League states "Using formulas based on the way the birth control pill works, pharmacy experts project that about 14 million chemical abortions occur in the United States each year."

And worldwide, approximately 1.4 billion abortions have occurred since 1980.

I am convinced the intentional killing of any human being is not part of God's plan. Killing runs contrary to the Gospel portrayals of the nonviolent Jesus, as well as the nonviolent witness of the early church during the first 300 years of Christianity.

And the intentional killing of innocent human life -- which direct abortion does -- is especially evil. Brutally dismembering unborn babies during suction abortions, and fatally burning these smallest members of the human family during saline solution abortions, is nothing short of barbaric.

No matter how difficult a pregnancy may indeed be, abortion is never the answer. There are many caring people at pregnancy centers ready to help both mother and unborn child.

And for those who regret their involvement in abortion, Silent No More and Project Rachel Ministry can help.

Years ago, while attending a pro-life conference sponsored by Americans United for Life, I asked the late world-renowned French geneticist Dr. Jerome Lejeune when human life begins. He instantly replied, "At conception of course."

I then asked him if any of his colleagues disagreed with him. He said, "No, we all know when life begins. Where we disagree, is at what stage life should be protected."

For Dr. Lejeune, conception -- when life begins -- was logically and morally where full protection should begin.

Because for most people the evil of abortion is not something they regularly encounter, it is a classic case of "Out of sight, out of mind." But a very effective organization to help us keep the dignity of the unborn and the horrors of abortion within eyesight is the Center for Bio-Ethical Reform.

What is the God of life calling you to do?