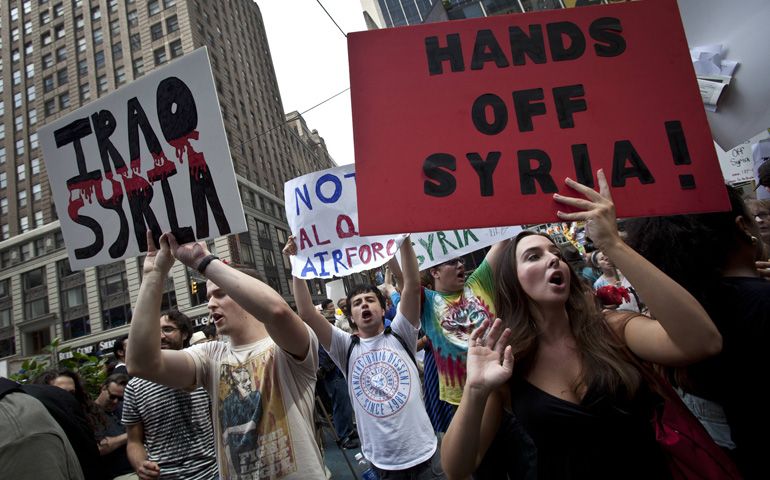 Is there such a thing as a just war? Can the massive death and destruction of armed conflict ever be morally justified by followers of the Prince of Peace?

For the first disciples of Christ, the answer was a resounding, "No!"

During the first 300 years of Christianity, it was unthinkable for followers of the nonviolent Jesus to kill a human being. They took most seriously Jesus' command: "But to you who hear, I say, love your enemies, do good to those who hate you, bless those who curse you, pray for those who mistreat you. To the person who strikes you on one cheek, offer the other as well. ... Put your sword back into its sheath, for all who take the sword will perish by the sword."

In his book Abortion and the Early Church, Michael J. Gorman cites an address of the famous church father Clement of Alexandria to wealthy Christians: "Contrary to the rest of men enlist for yourself an army without weapons, without war, without bloodshed, without wrath, without stain -- pious old men, orphans dear to God, widows armed with gentleness, men adorned with love."

Gorman emphasizes that Clement's statement represents the entire body of Christian literature from the first three centuries by affirming Christian faithfulness to Christ's paramount teaching of love, which completely rejects violence and bloodshed.

But later, St. Augustine in response to armed aggression against the innocent set the Catholic church on the road to the "just war" theory -- quite likely borrowed from the ancient Roman philosopher Cicero -- which would tragically lead most Christians to almost entirely forget in practice the pacifist foundation laid by Jesus and the early church.

In his book Kill? For Peace?, the late peace activist and theologian Jesuit Fr. Richard McSorley wrote, "The [just war] theory never worked in practice ... there is no record of any nation ever using it. No nation today accepts it as national policy ... it has become a theory used to justify every war that comes along ... this theory is unrealistic and is today outmoded."

In their 1983 pastoral letter "The Challenge of Peace: God's Promise and Our Response" the U.S. Catholic bishops wrote that because of the destructive capability of modern technological warfare, the just war theory principles of discrimination and proportionality have special significance.

Discrimination insists that civilians must be protected from the harmful actions of combatants. However, modern warfare kills, injures and displaces far more innocent civilians than combatants -- just take Iraq and Gaza as sad, typical examples.

The principle of proportionality also demands that the damage likely to be inflicted and the costs of war be significantly less than the harm being done by the aggressor. Modern wars have consistently caused far more harm than good -- again, take Iraq and Gaza as current examples.

In "The Challenge of Peace." the U.S. bishops quoted St. John Paul II: "Today, the scale and the horror of modern warfare -- whether nuclear or not – makes it totally unacceptable as a means of settling differences between nations. War should belong to the tragic past, to history, it should find no place on humanity's agenda for the future."

The day after the U.S.-led invasion of Iraq ended, Pope Emeritus Benedict XVI -- then known as Cardinal Joseph Ratzinger -- prophetically said, "There were not sufficient reasons to unleash a war against Iraq. To say nothing of the fact that, given the new weapons that make possible destructions that go beyond the combatant groups, today we should be asking ourselves if it is still licit to admit the very existence of a 'just war.' "

The Holy See's former nuncio to the United Nations, Archbishop Celestino Migliore, said the Vatican attitude for centuries was: "War is inevitable, so let's put some strict conditions to limit its effects. In these last decades we have adopted a different perspective and we say peace is possible, so let's work tirelessly for peaceful solutions."

The questions of pacifism, the just war theory, and war itself are very personal for me. Over 33 years ago, I was honorably discharged from the U.S. Army as a conscientious objector. While firing an M16 at pop-up targets, I realized as a follower of the nonviolent Jesus I could not aim a weapon at another human being, pull the trigger, and kill him or her.

Within a prayerful, honest and respectful atmosphere, the Catholic church and all Christian churches desperately need to seriously study, debate, dialogue and re-evaluate the just war theory in light of the nonviolent Jesus, the early church's pacifist stance, the impossibility of satisfying all of the just war theory's principles, the immeasurable harm caused by war -- including the vast resources wasted that should instead be used to help the world's poor -- and the unhealthy nationalism and militarism adhered to by countless Christians.

Now to Pope Francis' recent quoted remarks, often taken out of context, during an airplane news conference on a flight to Rome from his pastoral visit to South Korea.

While the pope said it was "licit" to stop an unjust aggressor, he qualified that statement by adding, "I emphasize the word: 'stop.' I'm not saying drop bombs, make war, but stop the aggressor."

It is essential for us to remember the words of the famous Trappist monk Thomas Merton: “The God of peace is never glorified by human violence.”

In a June 8 prayer for peace, Pope Francis prayed:

We have tried so many times and over so many years to resolve our conflicts by our own powers and by the force of our arms. ... How much blood has been shed ... our efforts have been in vain.

Now, Lord, come to our aid! ... Give us the courage to say: "Never again war!" ... Make us sensitive to the plea of our citizens who entreat us to turn our weapons of war into implements of peace. ...

Lord, defuse the violence of our tongues and our hands. Renew our hearts and minds, so that the word which always brings us together will be "brother," and our way of life will always be that of: Shalom, Peace, Salaam!

And to that, let the people of God say, "Amen!"

[Tony Magliano is an internationally syndicated social justice and peace columnist. He will speak Sept. 13 at Most Blessed Sacrament Parish in Toledo, Ohio, and Sept. 14 at Corpus Christi University Parish in Toledo. Tony is available to speak at diocesan or parish gatherings about Catholic social teaching. He can be reached at tmag@zoominternet.net.]