Guidelines for talking about the church

We talk about schism and purges. We talk about a leaner church, a remnant church. Many are convinced of sinister forces at work, and on the rise. In journals of opinion, at dinner parties, at family gatherings, at coffee and donuts after Mass, Catholics are talking.

I think we need some guidelines for these discussions, ways to bring them out of the fog of conspiracy and into the light of real conversation.

Let’s begin with the understanding that the way of Christ is the way of the cross. There may be a simplicity to orthodoxy and its necessary twin, orthopraxy, but there will be no ease.

We had a dinner party this spring. We began to talk about Franz Jägerstätter, the lonely saint, whose parish priest and bishop forbade him to follow the course of defying the Nazis that led to his martyrdom and eventual beatification. We talked about Athanasius, another lonely saint, who lived in a century when his understanding of the relationship between the Father and the Son, now assumed, was at various times and in various places declared anathema by the church he loved and served. 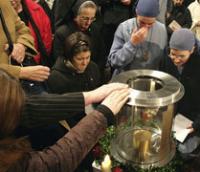 We could not talk about any homegrown Catholic saints from the time of America’s great shame, slavery. A little-remarked-upon, because scandalous, chapter in American Catholic history is the identification of the church with slavery. Religious orders bought and owned and sold slaves. Jesuits in Maryland held the largest numbers of slaves in the state before they sold them in 1838. Professor John McGreevy of the University of Notre Dame writes, “Studies of membership lists for American abolitionist organizations in the 1830s rarely find a Catholic name, and not one prominent American Catholic urged immediate abolition before the civil war.”

Indeed, when the Irish Catholic abolitionist Daniel O’Connell spoke out against slavery, American Catholics urged him to be quiet. McGreevy writes, “In fact, American Catholics, to the dismay of abolitionists, responded to Daniel O’Connell’s appeals with alarm. Groups of Irish Americans wrote O’Connell asking him to stop urging slave emancipation, and the editor of the New York Freeman’s Journal, the leading Catholic paper, first expressed disbelief that O’Connell could have uttered such words, and then chastised abolitionists, a ‘mischievous set of fanatics’ for threatening to overturn the Constitution.”

We do not know how the next 100 years will reveal the ways in which, in this time and in this place, we are blind to the Gospel.

How then to know when the call of Christ and obedience to one’s rightly ordained and ordered shepherds are in conflict? Such conflicts have, and do, and will exist.

This is tricky ground for Americans, because we are formed most surely in preference, rather than in conscience. Preferences are quickly molded and remolded. They rest on the shifting sands of fashion and need, perceived or real, and appetite.

The formation of conscience is a daily, lifelong work. I recalled at our dinner that Jägerstätter’s conscience was formed by daily prayer, daily Mass, the daily practice of the works of mercy. His house, as Jesus puts it in the story, was built on rock. It takes a long time to build such a sturdy house.

We don’t know where we may be asked to go, but we know the way. The way runs through an ancient practice of prayer, alone and with the assembly, scripture study and the works of charity and mercy. With that in mind, here are some proposals for how Catholics talk when they talk about church:

I have witnessed liturgical abuses that make my skin crawl, but I have never, ever seen the clowns and mimes that popular journals and editorialists write about again and again to raise money and whip up fear.

And Pope Benedict XVI surprises me whenever I read his writing -- his actual writing, not the Internet forwards used to raise money and whip up fear -- about war and ecology and immigration policy.

I remember back in the 1980s when Jim and Tammy Bakker’s ministry appeals were uncovered to have funded, not ministry, but a lavish lifestyle for the Bakkers. The late Holy Cross Fr. Robert Griffin addressed the faithful who had sent money to the Bakkers with one intention, only to see the money used for quite another intention. Were they dupes and fools? Griffin mused that God would receive their gifts -- for it was to God’s glory they were given -- in the same spirit in which they were given. It is a hope to which I cling.

And, remember, we are one body. What you lack, another has in abundance. What you drop, another picks up. What another finds too heavy to bear, you can shoulder.

Guidelines for talking about the church

Around the deathbed and the birth bed