Immigrant stories from the past echo those of today's newly arrived 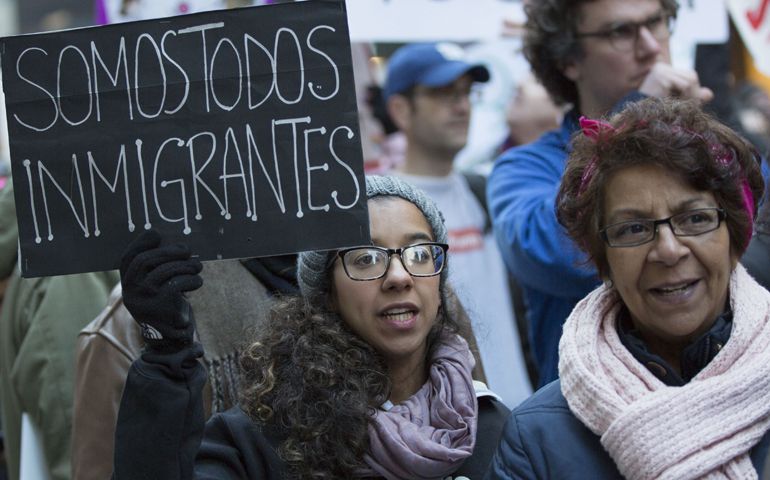 A young woman carries a sign that reads "We are all immigrants" during the Women's March on New York City Jan. 21. (CNS/Octavio Duran)

My family has been in this country since before the Revolutionary War. My first known ancestor settler was an indentured servant on the Mayflower. I'm descended from the wild and fractious Scotch-Irish who landed on the Eastern shores and kept moving south and west in the search of more land and more distance from the nearest neighbor. The immigrant I knew best was my husband's Grandfather Gulde.

Hans Fidelis Gulde won the Iron Cross fighting for the Kaiser in World War I. He was in many battles, a soldier who dug the trenches and then hunkered down in them, emerging to make forays onto the battlefield. He never spoke to us of those battles. In his 1918 diary, which a family member recently translated, he mostly writes of letters from his mother (he was her only child), and of going to Mass whenever he was able. He never mentions politics or strategy and he never extols the war or its generals. He was a foot soldier, the German equivalent of G.I. Joe. The reader is more likely to learn of the number of potatoes he peeled than the number of yards gained in an offensive push.

Did he kill Allied soldiers? We don't know. Hans never spoke of it. But, if he did, they were likely to have been Englishmen or Frenchmen or Americans. Hans might have killed my mother’s cousin, if the flu hadn’t kept him from boarding his troopship. Hans was, by any reckoning, an enemy combatant.

My family tree has soldiers who have fought in every war from the American Revolution onward, and always on "our" side until the Civil War. That's an American story. But so is the all-immigrant story into which I married.

Hans left the economic ruin of post-war Germany to make his way and see the world, promising his mother that he would return for her. When he arrived in Baltimore he came to a country that had lately enacted widespread bans on the teaching of German in private and public schools. In 1920 Robert Meyer, a teacher in Hampton, Neb., was tried and convicted for teaching German. In 1923 the Nebraska Supreme Court upheld his conviction, writing:

The salutary purpose of the statute is clear. The Legislature had seen the baneful effects of permitting foreigners, who had taken residence in this country, to rear and educate their children in the language of their native land. The result of that condition was found to be inimical to our own safety.

In Baltimore, so the family story goes, Hans lied to the immigration officials. The officer wanted to know if he had family to sponsor him in the United States. He invented an uncle in Denver. Why Denver? It is very far from Baltimore.

Hans headed west and got a job working in a silver mine, near Creede, Colo., where he met his future bride, Philippina Marie Lutz. Her parents had come from Germany a generation earlier and were married in Creede by an Italian Jesuit who rode horseback from Southfork to preside at the nuptial Mass. Another American story.

Philippina was pregnant with my husband's mother when Hans got an offer to work for a company he eventually owned. He went alone and left Philippina to give birth in her parents' mountain home. The company was located in Amarillo, Texas, about 45 miles north of the little town where my mother and I were born and where my father's family settled. (Confederate veterans -- who had, in the shorthand of the time, GTT, "Gone to Texas" -- established that town.) Hans' first memory of Amarillo was the Klan cross burned on the front yard of his home. He had landed in a place where, when asked the land of their ancestors, people were likely to answer, "Mississippi."

He sailed with Philippina and their baby daughter to bring his mother from Germany to her new home in America. And he set out to become the best American in town. He supported the growth and expansion of St. Anthony's Hospital. (In 1996 that hospital merged with High Plains Baptist and is now curiously called Baptist St. Anthony's. That's an American story, too.) He served on the local Citizens Committee, studying the causes of juvenile delinquency, and on the Catholic Welfare Board. When the Nazis took power in Germany, his efforts to show his American patriotism intensified. Page through some of Grandma Gulde's albums and you notice the shift, never remarked upon, as the world tilts again towards war. The Christmas card greetings change from "Hans" to "John." John gets active in the USO, encouraging my husband's mother to play piano in the canteen and dance with the soldiers posted at Amarillo Army Air Field.

But there was still suspicion. A popular poster showed Hitler, Hirohito and Mussolini with the caption, "The Four Freedoms Are Not In His Vocabulary!" and the exhortation: "Don't Speak The Enemy's Language! Speak American!" My husband's uncle recalls working in the family business one summer during the war when a customer walked in. His pleasant demeanor changed when he heard Grandpa's German accent coming from the back office. "Who's that g**d*** Nazi?" he barked.

My husband's uncle replied, "That 'g**d*** Nazi' is my father and we don't want your business."

For my husband these are stories. For his grandfather, and for all newly arrived immigrants, these are present and daily realities. We would be wise to remember.

Scamming immigrants for fun and profit