The weak self you were and will become 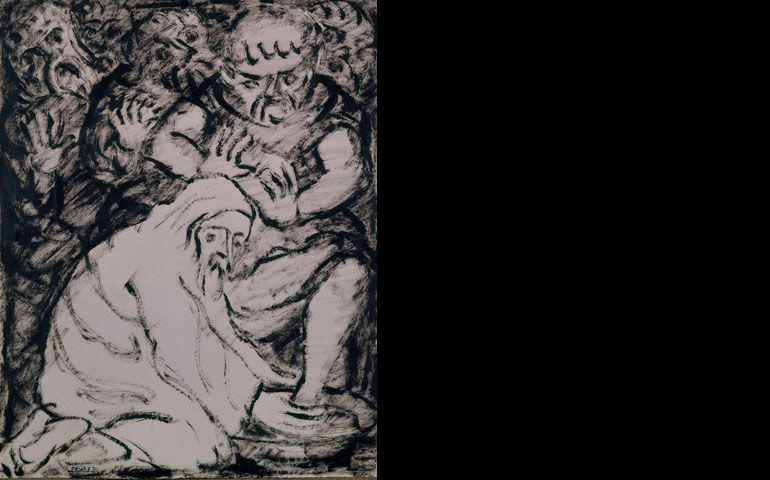 I spent an hour one May morning at school Mass with three of my grandchildren. The oldest is a fourth-grader. The middle child is in kindergarten. The toddler, when her parents are out of town, goes wherever I go. I sat in the kindergarten pew, awash in fluids. Children sneezed and snorted and coughed. They drained and cleared phlegm in chorus. They wiped their noses on sleeves and hands and the occasional proffered tissue.

There were flurries of movement as kindergartners, clutching their crotches and wobbling, fast, made a break for the bathrooms. The urge to relieve themselves had caught them -- again! -- all unawares and the race was on.

The 2-year-old in my care does what she does: runs and sprays and drools and wets and poops, happily unconscious of any code or comfort other than her own. Her orifices flow like rivers, everything working just fine, thank you very much, and sometimes all at once.

I had fallen asleep the night before reading Michael Kinsley's article in The New Yorker, "Have you lost your mind?: More bad news for boomers," about his cognitive declines due to Parkinson's disease. He writes that he is not alone, for "the tsunami of dementia that is about to swamp us, as the baby boomers age, has got plenty of attention, but the reality has not sunk in." In other words, we will soon be joining the crotch-clutching kindergartners on our dash to the bathroom, unless we join the toddlers in calm incontinence.

So I sat at Mass and wondered how brief is the time of human continence. We begin and end in diapers, with just a short dry spell in between. It is this brief window, between Huggies and Depends, when we can pretend to be masters of some thin slice of the universe.

But that's not how most of us adults think of ourselves. We think of ourselves as omnicompetent. And continence, we agree, is a component of competence, which, though we may not admit it, is the standard by which we determine human worth and standing. Because competence is necessary for economic utility, the ultimate goal and good.

Before I opened the magazine, I had been watching two videos: one was Emily Letts' abortion video selfie and the other was Kevin Durant's acceptance speech after he was named NBA MVP. Letts is "in awe" that she can make a life, and, one assumes from her work as an abortion counselor and her publication of the abortion, in awe that she can take a life. Because, she says, "I'm not ready to have children." Children get in the way. They are incontinent and incompetent.

Durant is keenly aware of how the children, of whom he is the second, slowed his young, single mother down. He remembers eating when his mother had nothing left for herself. That's a burden. But it is a burden she bore faithfully and Durant is grateful. He calls her "the real MVP."

Then I recalled a Holy Thursday homily I once heard in which the priest said, "Of course, Jesus didn't mean for us to literally wash one another's feet."

I told my husband as we drove home, "No. Washing one another's feet -- literally, for dirty feet can't be washed metaphorically -- is exactly what Jesus meant. Wash one another's feet. Feed my sheep: These are not philosophical concepts."

Because it's messy, humbling work to wipe bottoms and excavate noses and pare the hard, yellow talons that are ancient toenails. You can't think them clean and neat. Washing feet, in all its distressing forms, means getting down on your knees and it means getting dirty. But it's the only way to connect your strong self to the weak self you were and the weak self you will become. By which I mean it's the only way to become, and remain, human. Because to see the incompetent and incontinent as other allows us to cast them off, ignore, abuse and even kill them.

Peter wants Jesus to act like his vision of a master and lord. But Jesus is determined to be fully human, a man acting as God intended for all men and women to act. So he models what true humanity looks like:

He took a towel and tied it around his waist. Then he poured water into a basin and began to wash the disciples feet and dry them with the towel around his waist (John 13:4b-5).

Notice that John mentions the towel twice. Washing another will get you both wet. You'll need a towel. Notice, too, that John tells us Jesus used the towel. He washed and dried the disciples' feet.

Peter objects, "You will never wash my feet."

And Jesus answers, "Unless I wash you, you will have no inheritance with me."

The inheritance is our full humanity, and full humanity remembers always the last and the least, because they are ours. They are us.

[More of Melissa Musick Nussbaum's work can be found at thecatholiccatalogue.com.]

Spirituality | The weak self you were and will become

Satan lurking behind every rock