Already in the Confessions, Augustine is the doctor of grace 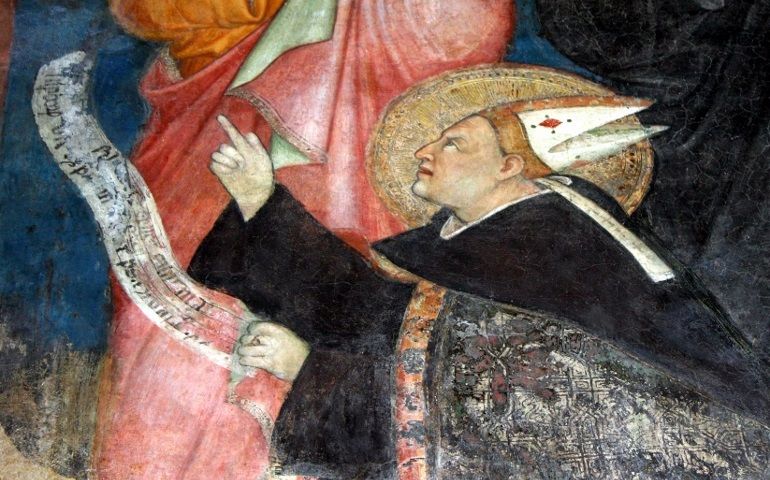 In the Church of San Marco in Milan, St. Augustine is seen in a detail from a 14th-century fresco of the Crucifixion. (Wikimedia Commons/Giovanni Dall'Orto)
This article appears in the Take and Read feature series. View the full series.

Given the historical significance and classic nature of St. Augustine’s Confessions, two writers for Take and Read have reflected on this book. See also Wendy Wright’s earlier contribution.

The Confessions of St. Augustine initiated a profound transformation of my life. In The Oil Has Not Run Dry: The Story of My Theological Pathway, to be brought out in January by McGill-Queen’s University Press, I wrote several pages reflecting on this life-giving event, pages that I present here with the publisher’s permission.

While a student at McMaster University [in Hamilton, Ontario, from 1942 to 1946], I was vaguely interested in religion. I thought of myself as a believing Protestant, attended Sunday worship in different churches and was an active participant in the McMaster Christian Union, a student organization associated with the international Student Christian Movement. My closest friend, Walter Hitschfeld, whom I had met in the internment camp [in Canada for Jewish refugees], was a student at the University of Toronto. Walter was a Catholic from Vienna.

Through him, I met an older German refugee, Egbert Munzer, a Catholic, who had worked for the German government under Chancellor Heinrich Brüning. Since Munzer had refused to take the oath of loyalty to Hitler, an obligation imposed on the members of the administration in 1933, he decided to leave Germany. He now taught courses at the University of Toronto. He regarded me as a young friend, and I enjoyed his company and learned a great deal from him. He married a lovely woman, Margo, a refugee from Berlin, with whom I developed a great friendship that lasted several decades.

An important event in my life took place on Jan. 1, 1946, the day I began to read a famous book Walter had given me for Christmas, the Confessions of St. Augustine. This made a powerful impact on me. It made me recognize God’s presence in my life and urged me to cultivate the interior life in which God deigns to address believers and their communities. It was a turning point in my life.

What was it that impressed me so profoundly in this book written in North Africa at the end of the fourth century? Young people are often deeply touched by special persons, their ideas or their actions, without being able at the time to analyze the reasons for their enthusiasm. I felt that the Confessions assigned new meaning to the Gospel, lifted me to a higher world and gave me the taste for the spiritual life: “Taste and see that the Lord is good” (Psalm 34:8). God’s presence became more real to me than ever before.

Reflecting 65 years later on the religious enthusiasm that the Confessions engendered in me, I observe four themes that touched me at the time and much later became guidelines in my theological thinking.

1. Augustine lived in the late Roman Empire, a pluralistic society where people were exposed to a variety of religious and philosophical currents and had to make up their own mind about what they believed. This plurality of beliefs and values, very much like the pluralism of modern society, made the life of individuals, particularly among the educated, into a spiritual adventure — searching, discerning and committing themselves — that assigned priority to personal convictions, lifting them above tribal loyalties and cultural pressures. Beliefs and values were not inherited; they were chosen. Among the educated, each person had his own story to tell, very much like seekers in modern society. Even if Augustine’s story of his conversion dealt with religious currents of the fourth century, he spoke to me in my own situation in the 20th century. He was my contemporary.

When I studied the Summa Theologica of St. Thomas in the 1950s, I noticed that this great thinker presented his theology without referring to his personal history. He had never wrestled for his faith, since it had been given to him by his Catholic culture. By comparison, Augustine was “modern.”

2.  The Confessions reveal that the God in whom Augustine came to believe was for him an inexhaustible source of vitality. Reading the Christian message as a series of moral obligations easily creates the impression that God is the great restrainer, the superego in the sky, limiting personal freedom and frowning upon our moments of happiness. For Augustine, finding the God proclaimed by the church was the opening of doors and the starting point of a life of endless creativity.

He found in his faith both peace and passion. He left behind the failings that had marred his life until then, escaped from the prison of self-centeredness and became a free man deeply in love with God. In reliance on this God, he became a bold thinker, inventing new ways of proclaiming the Gospel to his society. As a gifted writer, Augustine was able to persuade many readers that God was the Really Real, the invisible redemptive mystery, unique source of life, truth and love. Turning to God in faith was the beginning of a spiritual adventure.

3. St. Augustine was troubled by the cosmological images of the Bible that placed the throne of God in the heavenly kingdom above the earth. Heaven and hell were here spoken of as cosmic spaces. Following the Platonic tradition, Augustine came to think of God as eternal Truth, Goodness and Beauty beyond human comprehension, in which the world and more intimately human beings participated in some measure. This God was not enthroned in a space called heaven; this God had created space and time, transcended the world and was at the same time immanent in it. St. Paul had already moved beyond these cosmological divine images when he quoted with approval the Hellenistic aphorism, giving it new meaning: “In God we live, and move and have our being” (Acts  17:28).

In the Confessions, Augustine also admits that that he had been troubled by biblical passages that made God appear violent and vengeful. He was greatly relieved when he listened to the sermons of Bishop Ambrose in Milan who gave to these passages a nonliteral, allegorical meaning. Augustine was not a literalist.

4. Augustine wrote the Confessions to give thanks to God for the spiritual gift that opened his eyes to the truth and made his heart capable of love. He recognized that his urgent religious quest had been a response to a divine summons, that he had been able to find God because God had found him first. According to Augustine, the good news preached by Jesus and explained by the Apostles reveals that people enter into the light not as a result of their own effort, but in response to a gratuitous divine call addressing them in their lives.

Already in the Confessions, Augustine is the doctor of grace. The good things of significance that happen to us are unmerited gifts. Intelligence and willpower alone do not allow us to discover the meaning of our existence. Faith is the response to God’s Word. Augustine held that operative within us is a mystery, a hidden presence, a divine word, that allows us to find the way and see the light. For Augustine, God was savior, rescuing us from our self-destructive propensities.

Under Augustine’s influence, I came to look upon my short personal history as a series of rescuing events granted me out of the blue, that made me marvel and be grateful. These included my wonderful mother, my flight from Germany, the internment that made me a student and brought me to Canada, the university education sponsored by a generous woman, and the encounter with God through Augustine’s Confessions.

The conviction that God is my rescuer has never left me. In English, we call Jesus Savior; in German, we call him Heiland, a beautiful constructed word referring to his power to save and to heal. Many years later, I became deeply troubled by the question, “Why me and why not others?”

At the end of his life, Augustine wrestled against the theology of Pelagius, a spiritual guide in Rome who held that personal will, aided by grace, is the source of holiness, hinting that by trying hard one could be saved. Augustine believed that this interpretation, subsequently named Pelagianism, contradicted the message of the New Testament. Salvation was a free gift of God, surprising and unmerited.

He recalled the words of Jesus: “You have not chosen me, but I have chosen you” (John 15:16) and “I am the vine, you are the branches ... without me, you can do nothing” (John 15:5). St. Paul also wrote that God had loved and redeemed us while “we were still his enemies” (Romans 5:1). Augustine won the argument. In reliance on his writings, several church councils condemned Pelagianism and affirmed the gratuitous divine initiative present in the acts of faith, hope and love.

While I did not know this history when I read the Confessions, I caught Augustine’s message that all good things begin in God. This conviction has remained with me. I have always been uncomfortable with sermons that scold people for breaking the commandments and urge them to become more obedient, without reference to the Good News that we are enabled to do good by a power not our own. Troubled by certain sermons I heard in church, I would go to my room, open the Denzinger, the collection of official church documents, and read the ancient conciliar texts that condemned Pelagianism (Enchiridion Symbolorum).

Even when my theology became socially concerned and action-oriented, I never abandoned the Augustinian emphasis on the divine initiative. Here is a paragraph from my book Religion and Alienation that expresses this:

Social engagement is not deprived of the mystical dimension that is part of the Christian life. According to the ancient teaching, especially of St. Augustine, the good we do is God’s free gift to us. In this Christian perspective, action equals passion. While we see, we are being enlightened; while we act, we are being carried forward; while we love, we are being saved from selfishness; and while we embrace all people in solidarity, we are being freed inwardly to cross one boundary after another. Every step towards greater humanization is due to the expansion of a new and gratuitous life in us. We are alive by a power that transcends us.

[Gregory Baum is now in active retirement, having served the theology faculties at St. Michael's College and McGill University in Canada. He was a peritus at the Second Vatican Council. Two of his more well-known books include Man Becoming and Religion and Alienation.]

Culture | Already in the Confessions, Augustine is the doctor of grace