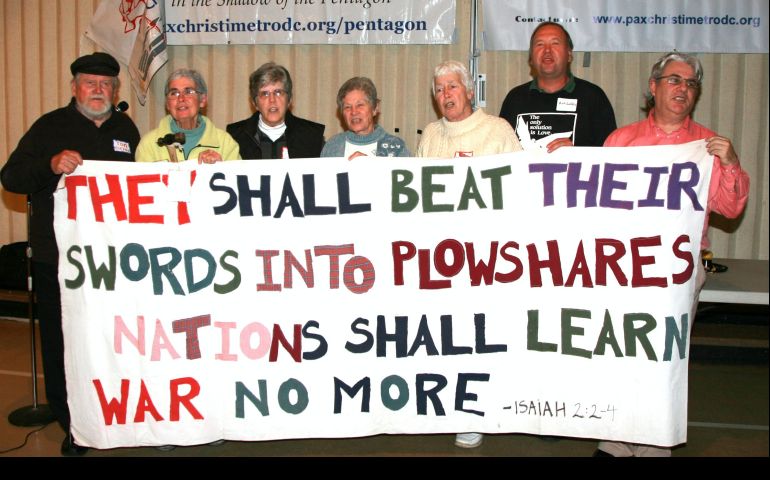 Seven plowshares activists seen together at the Pax Christi event Sunday. They are holding a sign created by the late Philip Berrigan, who participated in the first action in 1980. (Photos courtesy of Ted Majdosz)

Arlington, Va. — It was the kind of celebration that, six months ago, Michael Walli might have enjoyed: Simple plates of spaghetti and salad, gathered friends, and an award for a noted local peacemaker.

Except that award went to Walli himself, who could not accept because he is imprisoned some 700 miles away in a private detention facility in Georgia.

An on-and-off member of the Washington, D.C., Catholic Worker community for three decades, Walli is awaiting sentencing for a 2012 protest action in Tennessee against a U.S. nuclear weapons facility.

Members of the DC/Baltimore chapter of the international Catholic peace group Pax Christi awarded their annual peacemaker of the year award to Walli Sunday anyway, honoring him in absentia and organizing their members to write to the judge urging leniency for the activist and the two others in his group.

"With all his heart, Michael wanted to be used as one of God's redemptive agents in society," Kathy Boylan, a member of the D.C. Catholic worker community said during the event as she accepted the award on Walli's behalf.

"To Michael, holy obedience meant being willing to take risks, sewing seeds in faith without knowing what roots might come," Boylan continued, adapting a passage from a book on Norman Morrison, an activist who in 1965 committed suicide by self-immolation outside the Pentagon to protest the Vietnam War.

Along with an 83-year-old religious sister and another peace activist, Walli in July 2012 entered the Y-12 National Security Complex in Oak Ridge, Tenn., a facility responsible for the maintenance and production of the uranium components for the country's nuclear arsenal.

The activists were able to hang banners, splash blood, and paint a message on the wall of a storage site before a guard found them outside the complex's storage facility for bomb-grade uranium.

Calling themselves the Transform Now Plowshares, the activists said they wished to "indict the U.S. government" for its nuclear weapons modernization program and for planning to build a new facility at the Y-12 site.

Walli and the others -- Sisters of the Holy Child Jesus Sr. Megan Rice and Greg Boertje-Obed -- were found guilty in U.S. District Court last May of destruction of government property and sabotage.

Sentencing in the case is set for Jan. 28; the charges against them allow for a sentence of up to 30 years.

Boylan read aloud from an address prepared by Walli for Sunday's event.

"The success of the work of world peace and an end to war-making has been assured to all of us by God," Walli had written. "This work is realistic, practical, doable, and worthy of the enthusiastic support of all people of good will."

The name the Tennessee activists chose for their action, Transform Now Plowshares, references a number of actions against nuclear weapons taken by Catholic activists in the last three decades, referencing the exhortation found in the books of Micah and Isaiah to turn swords into plowshares and spears into pruning hooks.

The first such action, organized partly by Jesuit Fr. Daniel Berrigan and his late brother Philip Berrigan, occurred in September 1980, when the brothers and six others trespassed onto the General Electric Nuclear Missile facility in King of Prussia, Penn., where they damaged nuclear warhead nose cones and poured blood onto documents and files.

Seven activists involved in plowshares actions over the decades attended Sunday's event, including: Boylan, who has taken part in five such actions; Art Laffin, another D.C. Catholic Worker member who also co-edited a book on the matter in 1987; and Dominican Srs. Carol Gilbert and Ardeth Platte.

Dave Robinson, a former executive director of Pax Christi USA, the national chapter of the international peace group, gave a keynote address at the gathering Saturday, held at Arlington's Our Lady Queen of Peace parish.

Robinson, who now heads a small social services agency in Pennsylvania, contrasted the amount of money the country spends on nuclear weapons with its funding for education.

"We will spend $630 billion over the next ten years on the U.S. nuclear weapons complex," said Robinson. "That's roughly $63 a year, which is about ten percent of the Pentagon's budget."

"We're spending as much or more on our nuclear weapons complex as we are spending on educating our people," Robinson continued. "And that trickles down. It trickles down to where we live, to where you live. And it translates to people who are too hungry to concentrate in school."

"That's just a sin," said Robinson, who before becoming director of the Union City Family Support Center in Union City, Pa., served as a disarmament advisor to Archbishop Francis Chullikatt, the Vatican's permanent observer to the U.N.

Walli, Rice, and Boertje-Obed have been held at the privately-operated Irwin County Detention Center in Ocilla, Ga., since their trial last spring.

In the last several years, activists near the Tennessee nuclear site have been protesting a planned new facility for the complex, called the Uranium Processing Facility, which the National Nuclear Security Administration says is needed to replace aging buildings and facilities, some of which date to 1945.

Federal estimates have placed the price tag of the new facility, one of two now in the works by the security administration, at about $6.5 billion.

As Boylan, Robinson and others spoke Sunday a short slideshow played in the background giving details on past Plowshares actions. They included:

[Joshua J. McElwee is NCR national correspondent. His email address is jmcelwee@ncronline.org. He served briefly as a staff assistant for Pax Christi USA in 2008. Follow him on Twitter: @joshjmac.]