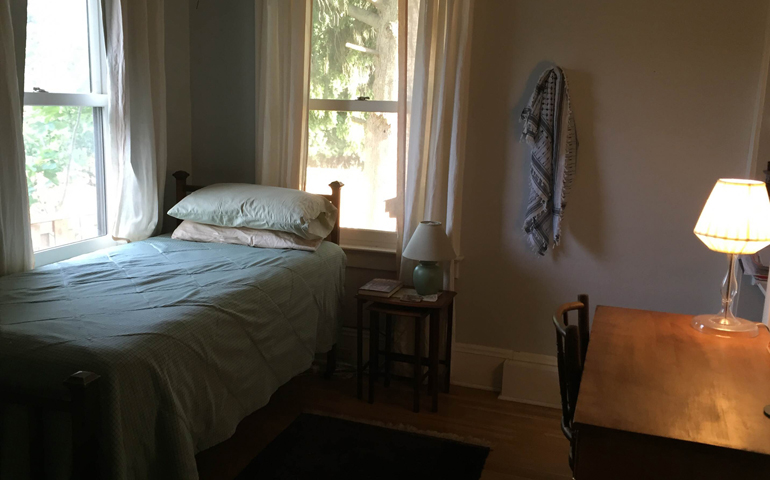 The Christ Room in the Burt household (Courtesy photo)

One Catholic family is "living what we're being called to do" by sharing the safety and spaciousness of their home in Portland, Ore., with those needing a place to stay.

The spare bedroom in the Burt household, called the Christ Room, has been occupied by a German au pair named Ines and a Portland medical student named Anastasia, among others. For the past nine months, the room has been home to Yaser Aburamadan, a 16-year-old Muslim student from Gaza.

Raised in a Catholic household in Louisiana by her multilingual father and mother, Claire Burt says that because of her father's language skills, and her parents' kind hearts, her family would often host out-of-towners in their home. As an adult, Claire adopted this practice of hospitality in her own home.

However, it was only after meeting Mufti McNassar, the founder of the first Catholic Worker home in Portland, that Claire decided to name her family's guest room the Christ Room. Claire was participating in the Just Faith program at her church, St. Ignatius Parish, where McNassar mentioned to the group that she had a Christ Room in her family's home where she welcomed sojourners.

Hearing McNassar call her guest room "the Christ Room" made Claire realize that her own home's space "felt like more of a ministry than guest room and needed to be revered," she said. Since designating the room "the Christ Room," Claire says that it has "been full longer than usual" and that she has seen "gains as a family in terms of meeting more people and being intentional in how we meet people."

The Christ Room, Claire's prayer room when vacant, is humbly furnished with a twin bed, bookshelf, and nightstand. Christ Room guests aren't expected to contribute financially to the home, but are expected to do their own dishes and laundry, and to help cook and maintain clean common areas.

The guests have "never been a burden," said Claire, adding it's "always been a real joy to have someone around." While the Burt family has had good relations with all Christ Room guests, and several past guests have maintained contact with them, Aburamadan's relationship with the family has been especially meaningful.

An aspiring engineer, Aburamadan is studying at Benson Polytechnic High School in Portland through the Program of Academic Exchange, which is funded through the State Department.

"He is a great kid," Claire said. "He is very mature and I think his life experiences have contributed to that."

Since arriving in Portland, Aburamadan has been active in the community. He has spoken of his experiences of living in Gaza at several different locations, including Grace Ecumenical Episcopal Church, Portland State University, and Mission of Atonement, a joint Catholic and Lutheran parish.

Aburamadan also provided the final reflection speech at a fundraiser for Friends of Sabeel, which according to its website is a "Christian ecumenical organization seeking justice and peace in the Holy Land through nonviolence and education." According to Claire, past speakers on Israeli-Palestinian relations in Portland have been journalists or nongovernmental organization workers, and people have been eager to hear from the perspective of a Palestinian teenager.

During his speaking engagements, Aburamadan is sensitive to the fact that not everyone is aware of the plight of Palestinians and is careful in explaining "how hard daily life is" and "how incredibly hard it is to just move freely," Claire said.

This maturity, sensitivity, and compassion are displayed in Aburamadan's home life with the Burts, such as during Lent, when Claire typically fasts until dinner on Wednesdays and Fridays.

"One of those days, early in the season, he offered to fast with me," Claire said. "I thought that was a sweet gesture and an unexpected act of compassion. I plan to offer to fast with him during Ramadan in June."

The reciprocated acts of compassion, hospitality, and solidarity leading to, and flowing from, the Christ Room are fitting for this Jubilee Year of Mercy.

Claire says that, for her family, practicing radical hospitality is "part of us living the future that we want to see in this world."

[Irene Rivera, a parishioner at the Basilica of the Sacred Heart of Jesus in Atlanta, Ga., is a senior in the religious studies program at Georgia State University.]