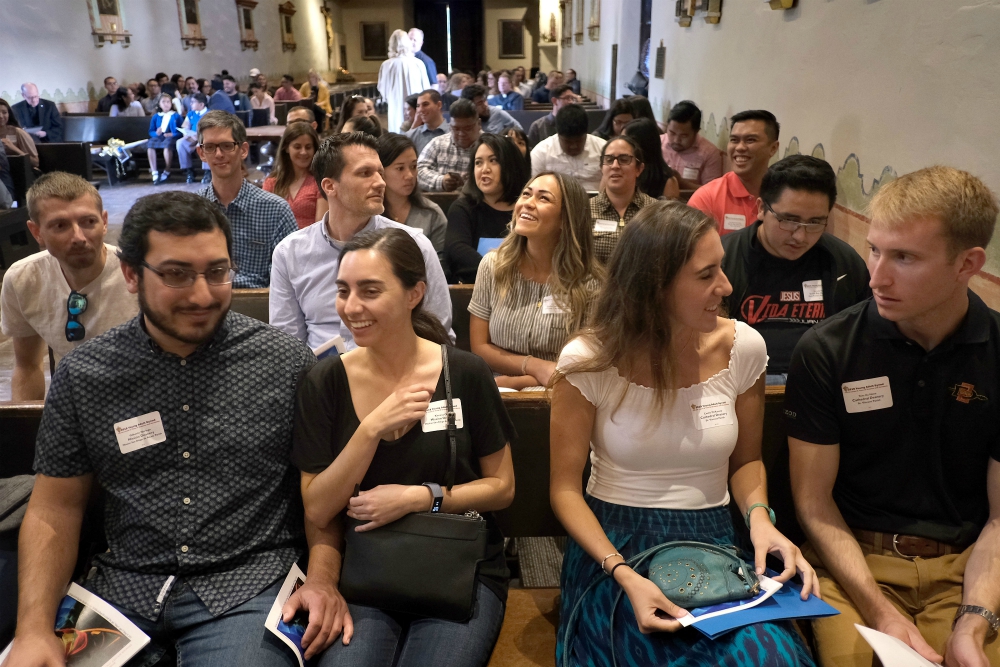 Nineteen-year-old Julia King's parish in National City, California, doesn't have a young adult ministry. Michael Tanwangco, 23, said he hasn't felt heard at his parish. And Clare Jones, 25, said she didn't even know where to start.

"I don't think I took the time to make my voice heard," Jones said. "It's just that I didn't even know that what I'm supposed to be speaking about."

At a time when the number of Catholic adults is decreasing and the number of those identifying with no religion — known as "nones" — is increasing, the San Diego Diocese is taking a serious look at the gap many millennials are facing in their parishes.

Over the course of two months, about 250 young adults, including King, Tanwangco and Jones, took part in the Young Adult Synod here. On Nov. 9, about 150 participants gathered at Mission Basilica San Diego de Alcalá for the final synod session.

This is the first diocese in the United States to have completed a synod focused on young adults, according to the diocese.

The synod ended with 31 proposals focusing on the lives of young adults in the Catholic Church. Among the proposals: that each deanery needs to have at least three paid positions whose sole responsibility is young adult coordination, and creating a young adult curriculum to help equip those who minister to young adults to "address the signs of the times."

It also included a proposal by Bishop Robert McElroy, which includes filling 25% of liturgical and leadership roles with young adults by the end of 2022. 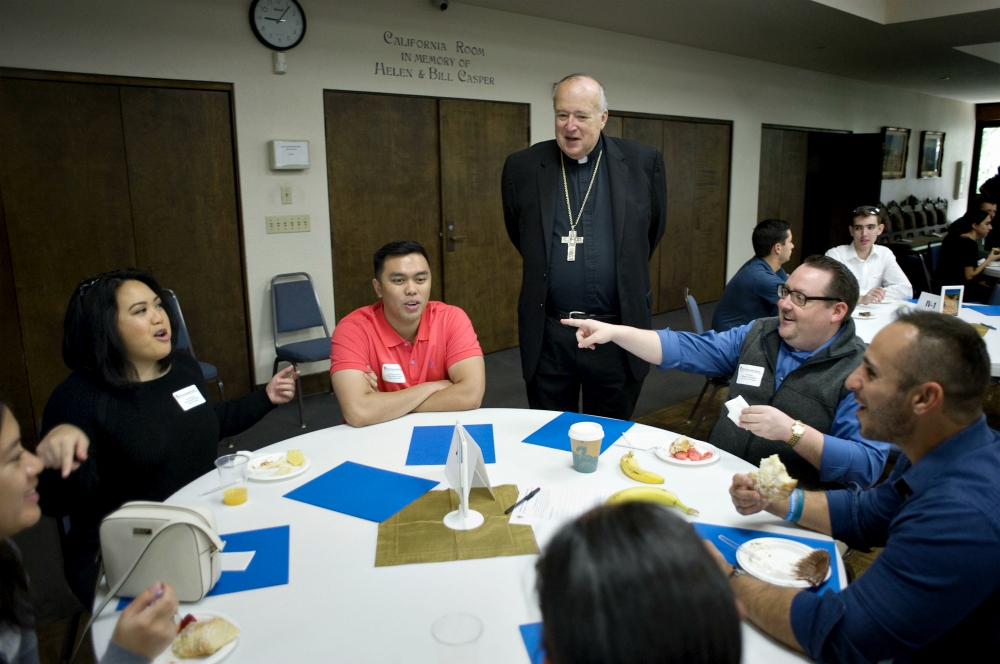 Bishop Robert McElroy joins a table discussing one of the 31 proposals during the Young Adult Synod in San Diego. (David Maung)

This event has been years in the making, said Patrick Rivera, director of the Office for Young Adult Ministry. Out of about 100 parishes, Rivera said, 40 now have young adult groups. His office sponsors retreats and 25 yearly events. Its last Theology on Tap event, a program that invites young adult Catholics to pubs for discussions on Catholic themes, had about 250 attendees.

But it all started with identifying — and then investing in — those young adults who were already there.

"I would say intentionality is the No. 1 key thing for us," he said. "We identified the leaders that were in the parishes."

But, he said, there's still a long way to go.

Some of the first proposals were asking for a lot of things the Office for Young Adult Ministry already does. Rivera saw that as a need for better communication.

By the last day, the proposals were much more fleshed out, but the discussions weren't dying down. 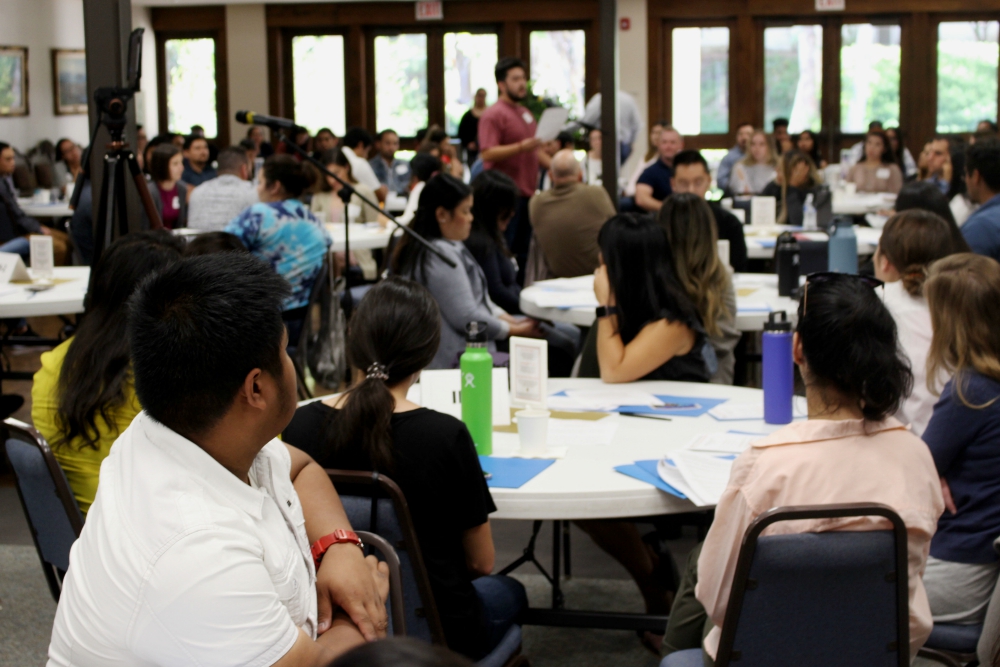 One topic that was expected to be a larger part of the conversation was the LGBT community. Only one proposal specifically mentions this community: "The diocese will host a water table at marginalized community group gatherings, such as 2020 Pride Parade."

Similarly, three years ago, Fr. John Dolan told NCR that the lack of attention on the LGBT community during San Diego's synod on marriage and family life was "the elephant in the room."

But Rivera hopes there's room for more discussion as the proposals get put into action.

"I like to think that these opportunities are also somehow tied into that LGBT community," Rivera said.

On Nov. 9, that started to happen during a discussion about a proposal that requires the diocese and Catholic Charities to facilitate service opportunities and quarterly speakers. One table brought up the idea of having LGBTQ speakers and aligning the service project to fit that speaker.

Still, these conversations might end up being left to individual parishes.

A surprising amount of time, McElroy said, was spent talking about how much young adults want more accommodating times for Mass and confession outside of Sunday mornings.

It's not that young adults won't go to Mass service, she said, it's that there needs to be more available for people's schedules, she said.

"I'm shocked how many people are on fire for Christ," she said.

Rivera found that many priests weren't trying to exclude millennials.

"I discovered that the priests were excited, encouraged, they just didn't know how or what to do," he said.

Some priests thought young adult ministry is for 18- to 25-year-olds. But for Rivera's office, it's 18 to 39, which was encouraging to many priests whose parishes already have programs for newly married couples or groups for new parents. Those parishes are already further ahead than they thought, Rivera said.

It also stems from a misunderstanding on who millennials are, he said, adding that people often put them in the same category as youth.

"Think about if we brought every sort of Kickstarter brainstorming millennial that was in our parish, and we put them in a position that needed expansion and growth," he said.

Plus, this generation is much easier than teenagers, McElroy said. Once the diocese got them together, its work was mostly done. 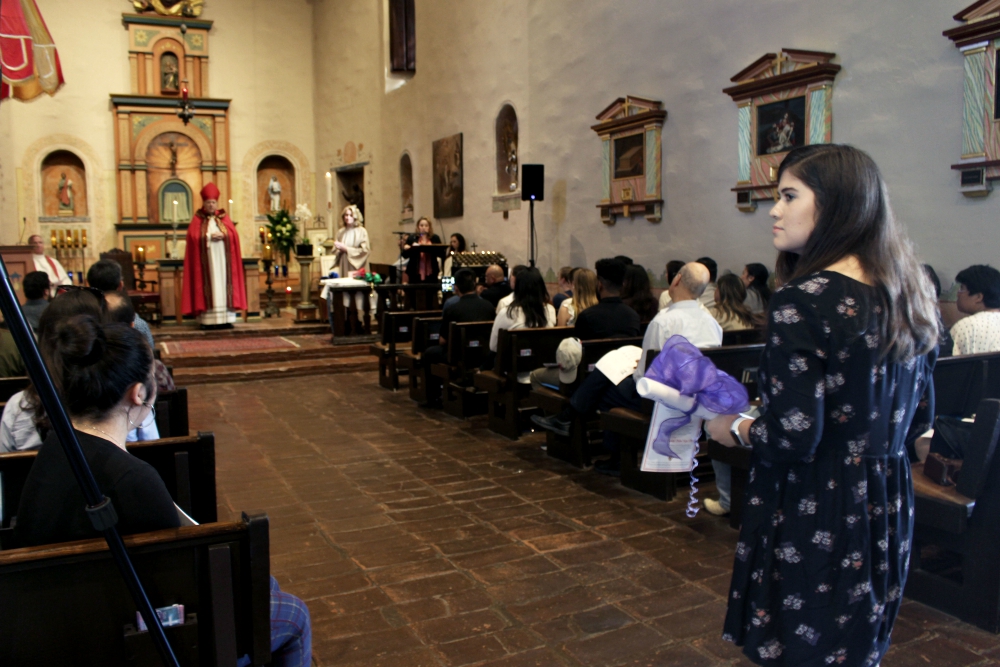 Clare Jones presents Bishop Robert McElroy with one of the scrolls that detailed some of the proposals during the 2019 Young Adult Synod in San Diego. (Heather Morrison)

"It's good to have an idea of where you'd like it to begin and kind of the umbrella goals and then just give it to the young adults," McElroy said. "They'll come out with really fascinating, wonderful, spirit-filled initiatives."

After all, the point of the synod was to hear from millennials.

And priests are already catching on. Katherine Herrera's parish in Chula Vista has spent the last month praying for the synod at Mass.

"For [the priest] to pray it at the end of our Masses showed that he wanted the whole parish community to be involved," said Herrera, 31.

And having that support is important because, for Herrera, young adult ministry is about finding out what her faith means to her.

"It's a nice separation from our youth and our parents' faith," Herrera said. "And make it our own."

She added that people often say, "I grew up Catholic" or "My parents are Catholic." But what does her faith really mean to her?

"This is the time frame we're discovering for ourselves," she said.

[Heather Morrison is a freelance reporter based in Los Angeles.]

This story appears in the The Field Hospital feature series. View the full series.
A version of this story appeared in the Nov 29-Dec 12, 2019 print issue under the headline: Millennials speak out at San Diego synod.