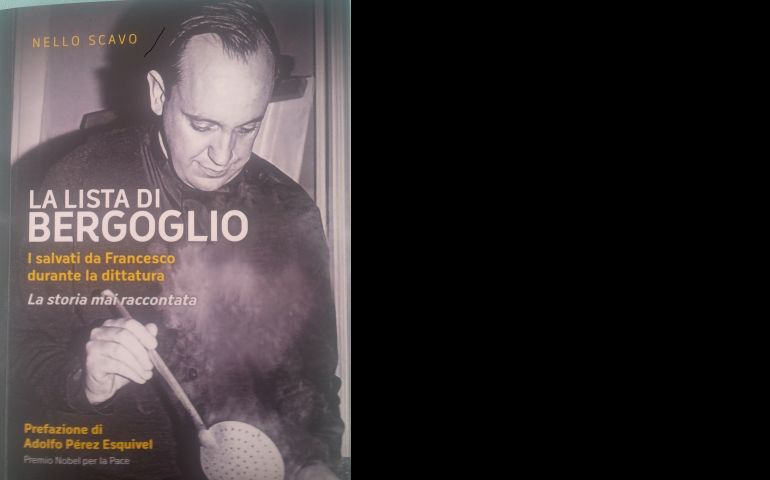 The cover of "Bergoglio's List," published by EMI in Italy

Rome — Perhaps the single public figure on the planet right now least in need of rehabilitation of his image is Pope Francis, who's got poll numbers in most places of which politicians and celebrities alike can only dream.

Nevertheless, rehabilitation is precisely what Italian journalist Nello Scavo delivers in his new book Bergoglio's List: The Untold Story of the People Saved by Francis during the Dictatorship, which was presented today at the headquarters of the Jesuit journal Civiltà Cattolica in Rome.

In reply to persistent charges that the young Fr. Jorge Mario Bergoglio was complicit in Argentina's infamous "dirty war" from 1976 to 1983, when roughly 30,000 people disappeared, Scavo asserts that Bergoglio was actually a Jesuit version of Oskar Schindler – quietly saving lives rather than engaging in noisy public protest.

The future pope, Scavo writes, saved as many as a thousand targets of the military dictatorship by providing shelter in a Jesuit college, passing them off as seminarians or laity on retreat, then helping them move out of Argentina.

In one case, according to Scavo, Bergoglio gave a man who bore him a passing resemblance his own passport and priest's clothing to make his escape.

In other cases, Scavo says, people were saved "indirectly" by Bergoglio, because the targets he helped stay out of prison would have named others who would also likely have been arrested and tortured.

Scavo provides names and details for roughly a dozen people rescued by Bergoglio and claims that each one of those people told him they knew "at least 20 or 30 more." Taken together with the indirect effects of his actions, Scavo says, Bergoglio was arguably responsible for saving more than the 1,200 lives attributed to Schindler's intervention during World War II.

One such survivor is today a mayor in Uruguay named Gonzalo Mosca, who was accompanied by Bergoglio onto the airplane that carried him to safety while being hunted by the police. Another is an Argentine lawyer and human rights activist named Alicia Oliveira, whose three small children were lodged in a Jesuit college by Bergoglio while she remained in hiding. Twice a week, she said, Bergoglio would take her to see her children, despite the fact that a warrant was out for her arrest.

"Nobody needs to explain to me who Jorge Bergoglio is," she told Scavo. "He helped many persecuted people escape, putting his own life at risk."

The rescued also include Alfredo Somoza, an atheist novelist who today lives in Milan, and Ana and Sergio Gobulin, a married couple now living in the Italian province of Pordenone. The pope has remained friends with the Gobulins, according to Scavo, speaking from time to time on the telephone.

Scavo claims the story of Bergoglio's pipeline has been previously untold because Bergoglio himself has never called attention to it, and in fact the pope didn't cooperate with the book project.

There are already plans for translations of the book in at least eight languages, including English, and there's also been at least two proposals for a movie a-la "Schindler's List."

Nevertheless, there are signs that the book may not resolve all the debates over Bergoglio's role in the dirty war.

The book itself carries a preface by Adolfo Pérez Esquivel, the Argentinian Noble Peace Prize Winner, which lauds Bergoglio's aid to victims but also questions his public silence during that period.

"He did not participate in the struggle in defense of human rights against the military dictatorship," Esquivel writes.

On Sunday, leftist Argentinian journalist Horacio Verbitsky published a new piece questioning the reconciliation between the pope and a Jesuit named Franz Jalics, one of two Jesuits arrested and tortured in 1976. Verbitsky,a former leftist guerilla, is close to the government of Christina Kirchner in Argentina, and has long been one of the most acerbic critics of Bergoglio's history during the dictatorship.

Jalics and the other Jesuit, Orlando Yorio, who has since died, originally suggested that Bergoglio had turned them in. Yet Jalics, a native on Hungary who today lives in a German monastery, withdrew that charge in a March 20, 2013, statement: "The fact is, Orlando Yorio and I were not denounced by Father Bergoglio."

Francis and Jalics met in person in Rome this past Saturday, Oct. 5, with Jalics assisting the pope in celebrating Mass.

In his Oct. 6 piece for the Argentine newspaper Página/12, Verbitsky asked rhetorically what "private revelation" had caused Jalics to withdraw his accusation. He insisted that Bergoglio must have known about such crackdowns on clergy, because it was common practice for the military to inform their bishops or religious superiors beforehand.

Scavo defends Bergoglio's choice not to engage in overt opposition by comparison to the role of Pope Pius XII during World War II – the price of being able to save lives behind the scenes, Scavo contends, was being careful in public.

"What use would a human rights champion be in jail, or even dead?" Scavo said.

"At the time Bergoglio wasn't known, so a public denunciation by him wouldn't have had any effect on the leaders of the coup," he said. "Let's also not forget that the regime assassinated roughly thirty bishops, priests and sisters, as well a hundred catechists believed to be communists."

This morning's event was hosted at Civiltà Cattolica by Jesuit Fr. Antonio Spadaro, who conducted a recent blockbuster interview with Francis on behalf of 16 Jesuit publications. Italian filmmaker Liliana Cavani told the crowd that the pope's role as revealed in the book reminds her of a "fisherman from Lampedusa," where a recent shipwreck left more than 200 dead, and where local fisherman worked around the clock to pull survivors from the water.

"Not being able to save everyone, he at least wanted to save someone," Cavani said.

Bergoglio's List is published in Italian by EMI, a missionary publishing house. An official from the publisher told NCR today it will be issued in English translation by Tan Books, though with a release date next year.

No pandemic can extinguish Christ's light, pope says at Angelus