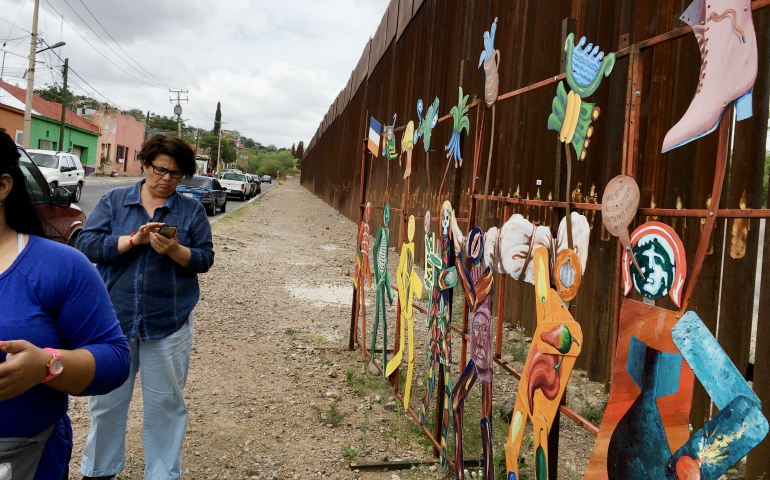 The fence as far as the eye can see, decorated defiantly (Mary Ann McGivern)

Two weeks ago, I stood in Nogales, Mexico, at the border wall. Our guide, Scott Nicholson, who works there at HEPAC (Home of Hope and Peace) stood with us and quoted from memory President Bill Clinton's July 12, 1994, speech at the Brandenburg Gate:

We stand together where Europe's heart was cut in half and we celebrate unity. We stand where crude walls of concrete separated mother from child, and we meet as one family. We stand where those who sought a new life instead found death. And we rejoice in renewal. Berliners, you have won your long struggle. You have proved that no wall can forever contain the mighty power of freedom.

Seven months prior to that speech, on Jan. 1, 1994, the North American Free Trade Agreement had come into force. U.S. agricultural exports undersold and bankrupted thousands of subsistence farms in Mexico and Central America. A mass migration to the United States began.

In August 1994, in response to that mass migration caused by NAFTA, the Border Patrol issued a new policy, "prevention through deterrence." That same month, the 17-mile wall at Nogales was completed. Migrants would now be forced to cross the border in the desert. The desert is the deterrent.

Clinton was not there to dedicate that wall or to speak about how it separates mother from child. One hundred twenty-eight people were killed protesting and attempting to cross the Berlin Wall. U.S. data doesn't go back to 1994, but from October 2000 through September 2016, the Border Patrol documented 6,023 deaths in Arizona, California, New Mexico and Texas. That's only the bodies found. They made the border crossing a death trap but they did not deter migrants.

While we were on the Mexican side, we visited the women's shelter for deportees, Nazareth House, staffed by the Missionary Sisters of the Eucharist. Sister Cecilia told us that if a woman tries to cross once and is caught and deported, she will return home; the desert is too hard. But if she is a mother and her children are on the other side of the wall, she will try again and again. Of course.

Back in the U.S., we watched an "Operation Streamline" trial of 12 migrants at the federal courthouse. They had been picked up two days before, pleaded guilty to misdemeanor illegal entry, and were sentenced to 30-180 days.

Afterward, a couple of the defense attorneys told us that the benefit of a misdemeanor guilty plea is that in the future, when immigration law is reformed, these 10 men and two women might receive waivers to rejoin their families here. It is unlikely that felony convictions, even just for illegal entry, would be waived.

The attorneys urged us to work for immigration reform. We do that, and we see their point that a "streamlined" misdemeanor conviction is the lesser of two evils. But it isn't justice.

The U.S. continues to benefit from the low-wage labor of the men and women who have the energy, drive, intelligence and vision to build their lives and raise their families here in the United States. They "jumped" the immigration line because we want cheap vegetables, low-cost construction, and housecleaning at less than minimum wage. In my opinion, we owe them.

In 2011, the 17-mile Nogales wall was rebuilt at a cost $4.1 million a mile, a furtherance of that deliberate policy of "prevention through deterrence" to end the wall at the desert, forcing migrants onto a death march.

Because President Donald Trump's administration is chaotic, his policies, including his detention policies, are under scrutiny. But NAFTA and "prevention through deterrence" began with Clinton and continued under Presidents George W. Bush and Barack Obama. It's U.S. policy.

"If this were any other context, if these were deaths as a result of a mass flood or an earthquake or a major plane crash, people would be talking about this as being a mass disaster," said Daniel Martinez, an assistant professor of sociology at George Washington University and the lead author of a Binational Migration Institute report on migrant deaths in Arizona.

I knew a lot about the border before I traveled there this time, but I didn't understand the policy.