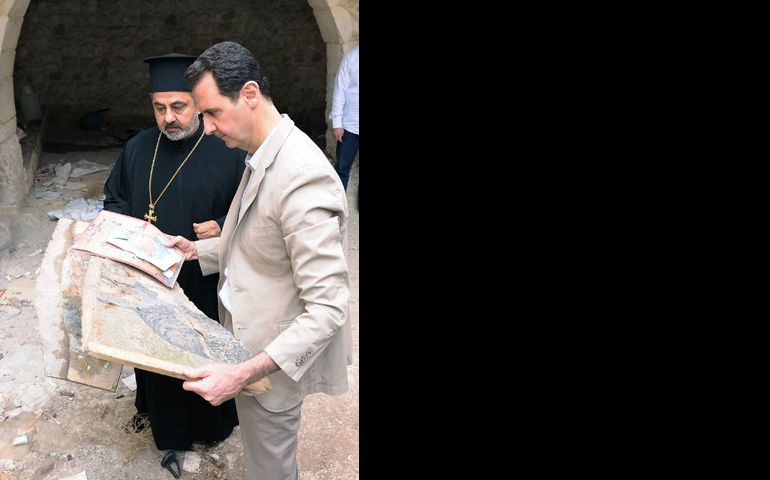 Syrian President Bashar Assad looks at destroyed religious artwork with a member of the clergy during a visit to the ancient Christian town of Maaloula, Syria, April 20, 2014. (CNS/Syria's national news agency handout via Reuters)

There have been many bad actors in Syria, but none worse than the country's president Bashar Assad. His war crimes and violations of humanitarian law are extensive: sniper attacks on peaceful protesters marching for freedom during the Arab Spring; the arrest and torture of thousands of civilians; the use of banned chemical weapons against both civilians and rebel fighters; dropping barrel bombs on civilian neighborhoods; the razing of entire cities; besieging cities and denying access to the U.N. humanitarian aid for them. Mr. Assad has coldly presided over the destruction of his country.

The Middle East has witnessed dictators who have dealt immeasurable harm to their people in order to maintain their political and ideological structures. Following in the steps of Moammar Gadhafi and Saddam Hussein, Bashar Assad has continued the tradition of dealing cruelly with his own people while showing stony indifference to the sufferings of his own homeland. It is not amiss to wonder whether he will ever be brought to justice, or whether, when he comes to trial, any tribunal, especially the struggling International Criminal Court, could ever mete out a sentence suited to the enormity of his crimes.

Nonetheless, Syrian and international teams are working to prepare the legal briefs for Assad's indictment. They hope to overcome two major impediments to a speedy trial suffered in previous tribunals of criminal political figures: First, assembling evidence of the crimes, and, second, connecting the dots between the events and Mr. Assad.

Often it takes years to assemble the documentation and testimonial evidence to indict war criminals. Several groups have already gathered mountains of evidence. One shipment of documents smuggled out of Assad's prisons contained some one hundred thousand records and photographs. Hidden in caves and demolished buildings, the materials were smuggled out by Chris Engels, a war crimes investigator working for the Commission for International Justice and Accountability, an independent group founded in 2012. A later account put the number of extracted documents at 600,000.

The evidence is of exceptional quality, because it consists of original documents supplied by a mole within the Damascus government, a group called the Central Crisis Management Cell established by Mr. Assad to oversee the prosecution of the war. For that reason, it becomes possible to assign the Syrian dictator with command responsibility for murder, torture, crimes against humanity and war crimes.

The evidentiary links, which can sometimes be hard to prove, are clear in materials from the Crisis Management Cell, as the group would send proposals to Mr. Assad for approval, and they would return with his signature. There are signed orders coming down from the top and reports going back to report on their implementation. According to Stephen Rapp, a former U.S. ambassador-at-large for war crimes prosecution who has had access to the materials, there is sufficient evidence to document to the highest levels the murder of some 10,000 people.

The flow of refugees from Syria also has provided the opportunity to interview many victims of Assad's violence, affording both first-hand testimony and cross-checking of victims' accounts. A recent report from Human Rights Watch recounted the assistance provided by Syrian refugees to investigators and prosecutors in Sweden, France and Germany.

Even if the evidentiary hurdles are overcome, political obstacles to prosecution may prove more troublesome. The Rome Treaty that established the International Criminal Court placed the authority to order prosecution with the U.N. Security Council. There two permanent members, Russia and China, both in revanchist authoritarian phases of their histories, are very likely to veto any prosecution of other major authoritarian leaders.

Under Vladimir Putin, moreover, Russia has become an ally and enabler of Syria's Assad. Though part of the core diplomatic group working for a resolution of the Syrian civil war, this past winter and spring, Russia not only resupplied the Syrian military, Russian aircraft assisted in bombing not only rebel-held areas, but also other towns and neighborhoods the Syrian regime in its paranoia feared might go over to the rebels, or were insufficiently loyal to the regime.

As a result, the best opportunity to date to force Assad to the negotiating table was lost. Subsequently, the Syrian dictator made clear his intention to fight on until his forces regained control of Syrian territory. For the immediate future, then, prosecution on the authority of the U.N. Security Council is out of the question.

Another option would be trial by a post-war Syrian government. Under the Rome Treaty that would be the preferred action. Recourse to the International Court is reserved primarily for situations where domestic authorities have failed to hold war criminals accountable. But given all the interested parties in the Syrian conflict, including contending sects of Islam and regional powers like Turkey, Saudi Arabia, Iran and Qatar, reconstituting a legitimate government in post-conflict Syria will be a difficult and lengthy process.

According to the Human Rights Watch report early prosecution may come under the controverted legal doctrine of international jurisdiction. This is the holding that courts in foreign countries can try human rights offenders when domestic courts fail to do so. It is a precedent used in the case of former Chilean dictator Augusto Pinochet. During the 1990s offenders from Bosnia and Rwanda were tried in European and North American courts. Despite diplomatic complications, war criminals from El Salvador have been tried in the U.S. courts.

It is possible then that Sweden, France and Germany -- and potentially other countries too -- could try Syrian rights violators. These are likely to be lower-ranking members of the regime, but precedents for accountability will be set.

Human Rights Watch makes the case for prosecution under the doctrine of universal jurisdiction this way:

National prosecutions in the courts of third-party countries do more than just punish individuals. They signal to those responsible for serious offenses in Syria that they, too, could find themselves in the dock. They also convey to Syrian victims, who currently have nowhere to turn for redress that domestic courts in refugee-hosting states could offer them a crucial opportunity for justice.

At the same time, the Commission for International Justice and Accountability and other national and international investigators are preparing for the day, after political circumstances have changed, when Mr. Assad and members of his Central Crisis Management Cell will be brought to the dock.

Meanwhile, it is critical not to fall into the trap laid by Mr. Assad where in comparing ISIS and Assad we choose Assad as the lesser evil. For the people of Syria and the greater Middle East to begin on the long road to democracy and security, both must go.

[Drew Christiansen, S.J. is a former editor of America and Distinguished Professor of Ethics and Global Human Development at Georgetown University. Ra'fat Aldajani is a Palestinian-American businessman and political commentator.]

Anti-war movement must listen to voices within Syria's civil war