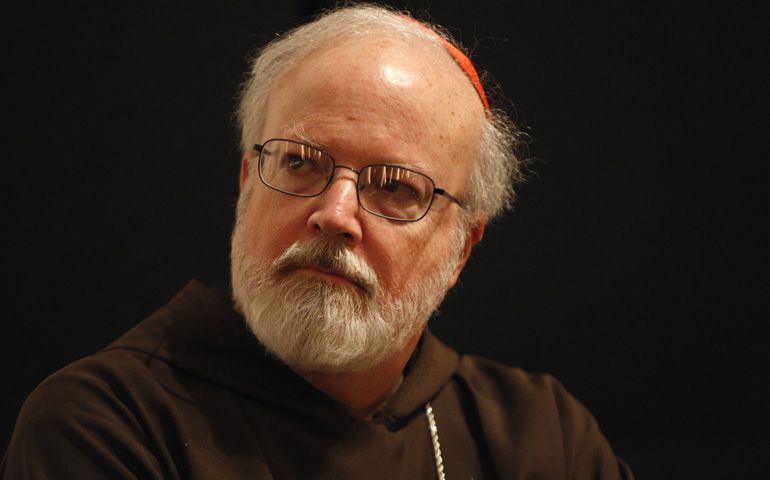 Rome — For a long time, conventional wisdom held that an American could not be elected to the Throne of Peter because you can't have a "superpower pope." Not only do the Americans already have too much power, or so the theory went, but a shadow would hang over the papacy as part of the world would suspect its decisions were being secretly crafted by the CIA.

In the early 21st century, however, some of the air has gone out of that bias, because the United States is no longer the world's lone superpower. As a result, for the first time an American seems thinkable.

While the U.S. media has focused on Cardinal Timothy Dolan of New York as the most plausible, if still remote, American prospect, another name has generated a surprising degree of buzz in the Italian press: Cardinal Sean O'Malley of Boston, partly on the strength of his profile as a reformer on the church's sexual abuse scandals, and partly because of his Capuchin simplicity as a perceived antidote to the Vatican's reputation for intrigue and power games.

Here's a sampling of what's been in the Italian papers over the last few days vis-à-vis the 68-year-old Capuchin cardinal of Boston.

One of Italy's most-cited Vatican writers, Marco Politi gave an interview on Feb. 14 to the Suddeutsche Zeitung, the main daily in Munich, in which he was asked who the favorites are heading into the conclave. He replied: "There are no favorites. It's not like 2005, when there was a clear candidate in Ratzinger and a strong contrast in Martini. The situation is very fragmented, and there are many papabili. There's Cardinal Scola of Milan, and Cardinal Ouellet who heads the Congregation for Bishops. There are candidates from South America, as well as outsiders such as Cardinal O'Malley of Boston and Cardinal Erdo of Budapest. There's not yet any aggregation of votes."

The "Italian Journalistic Agency," or AGI, ran a piece three days ago on the church's "champions" in the fight against clerical abuse, lauding O'Malley for "restoring credibility to the church after the 'escape' to Rome of his predecessor, Bernard Law, pursued by legal causes seeking compensation (to compensate the victims, O'Malley sold the archbishop's residence and moved to live in a small room at the seminary)."

Published in Verona, Arena had a run-down today of probable candidates for the papacy from outside Italy. "In the United States, the most likely figures are Timothy Dolan, the exuberant archbishop of New York, and Sean O'Malley, the archbishop of Boston," it said.

Last Tuesday, the day after Benedict's surprise announcement, Il Giornale published a run-down of possible popes. "There are diverse names of non-Europeans," it said. "Among them, the name of the Capuchin archbishop of Boston, Sean O'Malley, is prominent, who resolved a situation rendered fairly dramatic not only by sexual abuses committed by priests but also by the cover-ups by his predecessor, Bernard Law. In recent weeks, among other things, Benedict XVI called to Rome as Promoter of Justice in the Congregation for the Doctrine of the Faith, with responsibility for these cases, the 'right hand' of O'Malley, Father Robert Oliver."

Writing yesterday, Vatican-watcher Giacomo Galeazzi said that the candidate "indicated from the American bishops seems to be the courageous Capuchin friar O'Malley, the only cardinal, with the Archbishop of Vienna Christoph Schönborn, to publicly defend the victims of pedophilia (like Pope Benedict, who gave priority to efforts to render justice to those injured both in the soul and the body, and to relieve their suffering as much as possible) when the dean of the College of Cardinals, Angelo Sodano, defined the scandal as "petty gossip" in an embarrassing salute to the pope in 2010."

The well-regarded Vatican writer Paolo Rodari treated O'Malley at greatest length in a blog post last Saturday. "There are many who ask themselves if the next pope will be a Capuchin," Rodari wrote. "On paper, the Capuchins have the numbers for giving the papacy a turning point. They're close to the people, they don't have a 'clerical' mentality, they emphasize collaboration with the laity, and they have an attractively simple model of life. Those are three characteristics cut out for a church that's paid a high price for its scandals. … O'Malley is a humble prelate, which is no bad thing in a Roman Curia that's suffering not just a few financial difficulties. It's no accident that he's a Prince of the Church who prefers his simple brown Capuchin habit to the sartorial splendor to which his office entitles him. He's a cardinal who loves to dialogue with his faithful through Twitter, and uses his personal blog as an important instrument not only of communication but for meeting everybody, the faithful and even non-believers."

I can confirm the O'Malley buzz from personal experience. Right now, it's tough for an American journalist to walk into the Vatican Press Office without fielding questions from colleagues about him.

At the moment, this is basically journalistic chatter. The real action will begin next week, when most of the cardinals will be in town for Benedict XVI's big farewell on Feb. 28. We'll see then if O'Malley has serious traction as a candidate.

As the cardinals from other parts of the world start to take a serious look, they're likely to see both promising qualities in O'Malley and question marks.

On the plus side, many cardinals have said they'd like a pope with a global vision, sensitive to the church outside the West where two-thirds of Catholics today live. O'Malley has a Ph.D. in Spanish and Portuguese literature, and has long experience of ministering to both Hispanics and Haitians. He worked in Chile as a priest, and served as the Bishop of St. Thomas in the Caribbean. He's deeply attached to many of the devotions popular at the Catholic grassroots across the developing world.

O'Malley has at least a basic command of Italian, seen by most as a prerequisite for serving as the Bishop of Rome.

O'Malley's simplicity isn't just a matter of wearing his brown habit, or insisting on being called "Cardinal Sean." By reputation he's not given to building empires or playing political games, and on the back of the Vatileaks mess, ongoing questions about the Vatican Bank, and other perceived Vatican imbroglios, that profile could strike some cardinals as just what the doctor ordered.

Despite his overall image as a moderate, O'Malley is by-the-book when it comes to matters of Catholic orthodoxy and is especially committed to the pro-life cause, making him attractive to cardinals concerned that the church hold the line on its positions in the culture wars.

O'Malley is also passionate about the "New Evangelization," expressed not only in his use of Twitter and blogs, but in his general approach to the role of a bishop.

Certainly O'Malley's image as a house-cleaner on the sex abuse crisis doesn't hurt. Ironically, the best spokesperson for the O'Malley campaign at the moment may be his fellow American, Cardinal Roger Mahony of Los Angeles, who, fairly or not, has become the latest symbol of the church's failures. Controversy over his presence at the conclave has spread across the Atlantic; this week the widely read Italian magazine Famiglia Cristiana has a cover package on "The Mahony Case," including an on-line poll for readers to vote as to whether Mahony ought to participate in the election of the next pope.

In that context, many cardinals may feel special pressure to pick a pope seen as having "clean hands" on the sex abuse crisis.

Those positives, however, come intertwined with some features of O'Malley's biography that may give cardinals pause.

For one thing, O'Malley has zero experience in the Vatican. While that means he's not identified with its recent meltdowns, it may also mean some cardinals will wonder if he'd be out of his depth trying to get the place under control, perhaps overly dependent on veteran insiders to get things done.

For another, O'Malley is a sensitive soul who occasionally has seemed to struggle under the burden of office. In 2004, facing not only sex abuse litigation but also a painful round of parish closings, he put out an anguished letter to Boston Catholics in which he wrote: "At times I ask God to call me home and let someone else finish this job, but I keep waking up in the morning to face another day of reconfiguration."

On the heels of a pope who just resigned because he felt he no longer had the strength to do the job, some cardinals may wonder if O'Malley possesses the steel to withstand the burdens of the papacy.

It's worth noting that O'Malley's record on the abuse crisis has not played to universal praise. The victims' group SNAP faulted him for delaying release of the names of accused priests in Boston, asserting that O'Malley "belatedly and begrudgingly posted a very partial list with minimal information, using hair-splitting excuses for not being more prompt or thorough."

Finally, while 34 previous popes have come from religious orders, there hasn't been one since the 19th century, and there's never been a Capuchin. In some circles, there's a belief that under ordinary circumstances popes ought to come out of diocesan structures rather than religious orders, on the grounds that the diocese represents the ordinary pastoral setting most people experience. In addition, the Capuchins themselves have usually held that they really shouldn't become bishops at all except in mission territories. Among the keenest devotees of tradition in the College of Cardinals, there might be some reluctance along these lines.

Economic poverty in ten words, from a Catholic Worker breakfast

Laws can't hug children, but they can hurt them