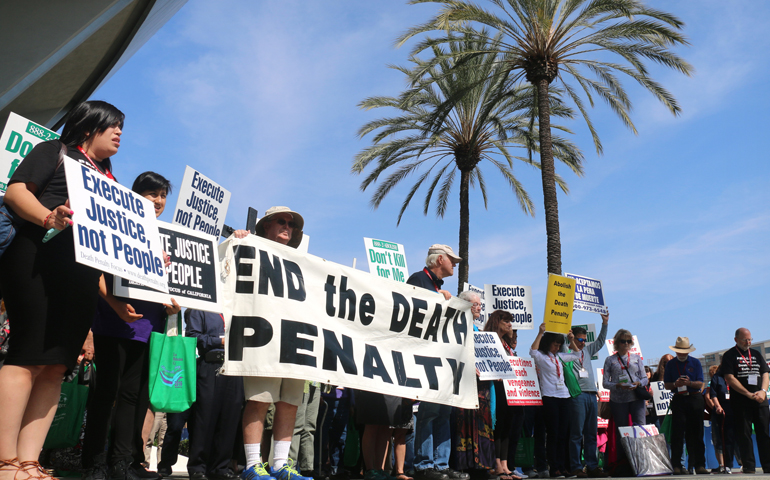 People gather in Anaheim, Calif., for a demonstration against the death penalty Feb. 27 as part of the Los Angeles Religious Education Congress. (CNS/J.D. Long-Garcia, The Tidings)

For months, California bishops have been stonewalling requests that they announce their early support of an anti-death penalty measure slated for the November ballot, The Justice That Works Act of 2016. Their spokesman told me in January that the bishops were dealing with other issues, such as opposing an assisted suicide bill and a measure requiring parental approval for abortion by a minor. At the time, I was told that probably the bishops would not take a stand on the death penalty until it is certified for the ballot, as is their custom.

Never mind that Pope Francis took a strong anti-death penalty stance when he spoke before Congress; this apparently has not changed the California bishops' timing.

This despite the fact that four years ago, when an anti-death penalty measure was on the California ballot, they took a stand of support, albeit in August -- only three months before the election. The measure failed by a 52-48 percent margin. But this year, they may be speedier. According to Karen Clifton, the executive director of the Catholic Mobilizing Network, "We expect the bishops to follow through on a campaign after the ballot measure is certified." That may not be until late June or July, but it is an improvement.

Frankly, I find the bishops' reluctance to be early endorsers of this initiative puzzling. Catholics, as well as the general public, are increasingly supportive of ending the death penalty. Nineteen other states have already abolished capital punishment. I fear the bishops don't understand how important it is to support the initiative now, not later.

My opposition to the death penalty was renewed last year when I became chair of a SpeakOut committee at the Thomas Merton Center in Palo Alto, a lay-organized Catholic spiritual center. We were against the death penalty and decided to ask the bishops to take a strong stand against it. Our logic was that if the California bishops would oppose the measure early on, Catholics might support it -- maybe by enough of a margin to tilt the outcome from 52-48 against and instead garner majority voter support. We also thought that California's opposition to the death penalty could have a philosophical impact on the U.S. Supreme Court.

Our committee met with our local bishop, Patrick McGrath, and while he indicated support, he seemed to us reluctant to press other bishops to campaign against the death penalty. He did send a letter to his pastors asking them to urge their congregations to oppose it.

As SpeakOut chair, I contacted Bishop Richard Garcia of Monterey, a member of the executive committee of the California Catholic Conference, the public policy arm of the California bishops. Garcia said we needed to talk first with Ned Dolejsi, the conference's executive director. I did, but then Garcia refused to meet with our committee, suggesting we should work with Dolejsi on this issue.

Dolejsi told me in January that he didn't think the bishops were ready yet for an anti-death penalty stand. He also said an opposing measure, urging that people on death row be executed after 10 years, would not qualify for the ballot because the DAs and police chiefs sponsoring it would never raise enough money for signature gathering.

It qualified in May. Of the two death penalty ballot measures, the one receiving the highest number of votes in November will prevail.

In mid-May, Dolejsi told me the California bishops agreed to support the anti-death penalty initiative, but still were not ready to speak out publicly.

What now? Small group efforts have not effectively gained support across the state for this measure. Experienced campaigners know that it is harder to change peoples' minds once they decide on an issue, hence convincing them early is critical. That is why the bishops need to speak out now -- in unison and forcefully.

Dolejsi said bishops have talked about writing op-ed columns, letters to the editor, produce material for Catholic parishioners and conduct focus groups. This will not be enough. The bishops need to spend money on the campaign. When asked if they would, he said no, because that was not their policy on initiatives -- but they would urge parishioners to fund the anti-death penalty measure.

Bishops spent time recently lobbying and rallying against legislation allowing assisted suicide; the least they could do is apply the same energy to the anti-death penalty measure.

This is a critical election. If the anti-death penalty initiative fails, chances are it won't reappear on the ballot for a while. And the pro-death penalty measure calling for mandated execution after 10 years on death row has some superficially convincing arguments -- it will save the state money; this is the more humane way to treat prisoners because they no longer will have to suffer through a lengthy appeal wait, etc.

Finally, there will be a big turnout this November, with the presidential race drawing in all sorts of new voters. The California ballot also has a number of interesting measures, including the legalizing of marijuana.

Time is of the essence. The bishops' stonewalling is hurting this issue.

[Diana Diamond is a journalist and lives in Palo Alto, Calif.]