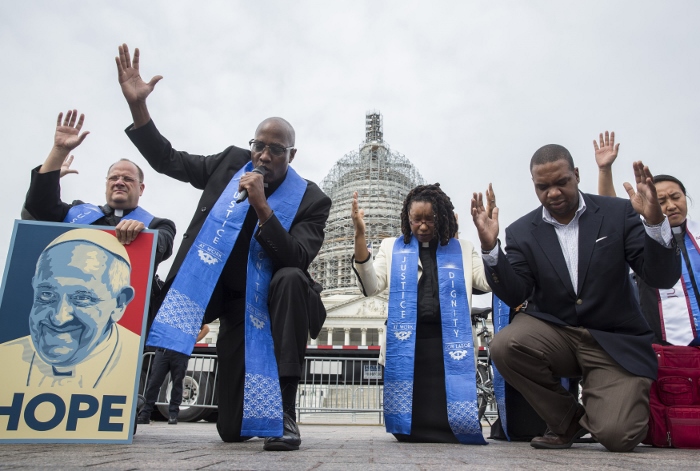 Faith leaders pray as low-wage contract workers from the U.S. Capitol and other federal buildings rally during a strike over wages in Washington Sept. 22. The group invoked the name of Pope Francis as they demonstrated for higher pay ahead of the pontiff's arrival in the nation's capital. (CNS photo/Joshua Roberts)

On Sept. 22, the day Pope Francis arrived in Washington D.C., I accepted an invitation to join a procession of low-wage workers who were striking against poverty pay at the U.S. Capitol and other federal buildings.

The striking workers — draped in white robes — marched to the U.S. Capitol carrying icons of Dorothy Day and Martin Luther King, as well as a large float with the image of the Holy Father under a banner that proclaimed “Low-wage Workers Welcome You!”

These contract workers were on strike because even though they serve wealthy and powerful U.S. Senators, they earn so little that they go without food or shelter.

Rebuffed by Congress and the president, the workers walked off their jobs hoping that Francis would aid their struggle to win living wages and union rights. In fact, a week earlier, the workers emailed a letter requesting a meeting with the pope to share their stories of suffering when he visited Capitol Hill.

Even though the Holy Father didn’t grant them an audience, he gave the workers an even more powerful gift — Francis called upon our elected leaders to be faithful to their vocation by helping low-wage workers attain justice and dignity in their lives.

Standing before Congress, the pope reminded them, “You are called to defend and preserve the dignity of your fellow citizens ... especially those in situations of greater vulnerability or risk.”

Going further, Francis asked Congress to act on this vocation because ordinary workers “who strive each day to do an honest day's work, to bring home their daily bread, to save money and ... to build a better life for their families” are the ones who “sustain the life of society.”

And perhaps most importantly for the striking workers, the pope — drawing upon a century of Catholic social teaching — asked Congress to help workers because such action “generates solidarity” and “creates organizations which offer a helping hand to those most in need.”

In other words, those privileged enough to sit in the chamber and listen to Francis got a simple but direct biblical message — God is calling you to serve those who serve you.

When I joined with the striking workers who marched to the Capitol bearing icons of Day and King, I now see that they prophetically anticipated the message of Francis. With him, they are calling on Congress to walk in the footsteps of those prophets of justice who courageously accepted God’s mission for them to serve the poor and the downtrodden.

On that day the pope landed, we knelt and lifted up our hands towards the Capitol dome and recited the prayer of Francis in Laudato Si’ — “O Lord, touch the hearts of those who gain at the expense of the poor and the planet.”

After Francis has left us, that is still our petition and our vocation.

[Ty Hullinger is pastor of St. Anthony of Padua, St. Dominic and Most Precious Blood churches in Baltimore, Md.]