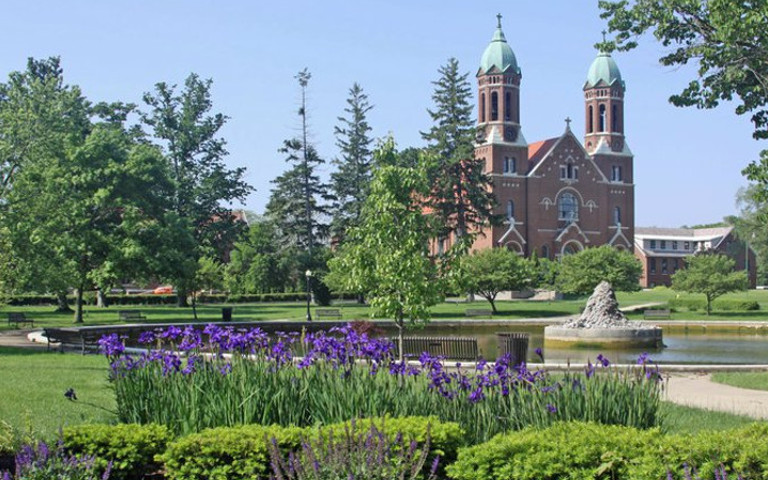 Editor's Note: Welcome to Campus Notebook, NCR's college round-up, where every Friday we bring you the latest news in Catholic college and university life. Do you have news you would like to share? Email Shireen Korkzan at skorkzan@ncronline.org.

President Robert Pastoor told the Saint Joseph’s community the school would need $100 million in order to continue operating. He told a local television news station he will no longer serve as president after the spring commencement.

Students who are not graduating in May will have to take accelerated online courses or transfer to other schools to continue their studies. So far, 19 colleges have agreed to participate in a “teach-out” transfer process for students in good academic standing, including Purdue University, Lewis University, Marian University, Rockhurst University and Valparaiso University.

Nursing students can still complete their program through St. Elizabeth School of Nursing in Lafayette.

Saint Joseph’s alumni are now demanding answers and resignations from board members. They, along with current students and faculty, said they didn’t realize the 127-year-old institution was at risk of closing until after the decision was made.

Involved for Life, a website dedicated to helping Saint Joseph’s College, was created by alumni to help the 904 current students and approximately 200 professors who will be directly impacted by the school’s suspension. It is “also dedicated to holding the president and board of trustees accountable for their decision and demanding transparency.”

UPDATE: Philadelphia – Chestnut Hill College is seeking to clarify media reports that the Catholic college is seeking exemption from state anti-discrimination laws. The reports were made by local media early last week and by College Notebook Feb. 10. See story below.

The case stems from a complaint filed with the Pennsylvania Human Relations Commission by a former student, Allan-Michael Meads, who says his expulsion from the school in 2012 was excessive punishment and “because of his race.” In a 2015 ruling, the commission found there was “probable cause” of racial bias in Meads’ complaint but that case has not advanced.

A statement on Chestnut Hill College’s website says that “the probable cause document ... [is] inaccurately being interpreted as facts.”

Meads, an African-American student, was expelled weeks before he was set to graduate for allegedly misappropriating funds from a Chestnut Hill production of “A Raisin in the Sun,” which he directed.

A statement from the college dated Feb. 7 says, “With respect to this case, the College absolutely denies any and all allegations of race discrimination. To date, [Chestnut Hill College] has not been afforded the opportunity to rebut the allegations, which we believe are completely false.”

The Feb. 10 post of Campus Notebook incorrectly stated that Chestnut Hill College has asked Commonwealth Court to exempt it from state anti-discrimination laws because it’s a Catholic institution.

The college said in its press release that it “has no intention to exempt itself from anti-discrimination laws. Further, even if the College wins the appeal, it must adhere to all prevailing laws pertaining to discrimination.” Instead, the college is asking Commonwealth Court to determine whether or not the state’s 1988 decision that religious freedom protects Catholic high schools’ discipline processes should apply to institutions of higher education as well.

The error was made by referring to a CBS Philly article published on Feb. 7, which is titled, “Chestnut Hill Asking For Exemption From State Discrimination Laws.”

NCR’s Campus Notebook blog is an aggregation of news on Catholic colleges and universities from around the country, not original reporting. However, further research on Chestnut Hill College’s case with the Pennsylvania Human Relations Committee would have led to the college’s FAQ page on this very topic, located within the website’s Diversity and Inclusion tab.

Philadelphia — Chestnut Hill College has asked Commonwealth Court to exempt it from state anti-discrimination laws because it’s a Catholic institution.

The appeal stems back to a dispute in 2012, when Allan-Michael Meads, an African-American student, was expelled weeks before he was set to graduate for allegedly stealing funds from a Chestnut Hill performance of “A Raisin in the Sun,” which he directed.

The Pennsylvania Human Relations Commission determined in 2015 that racial bias led the college to expel Meads even though he, cast members and faculty assert that he didn’t steal any money. The commission also found that Chestnut Hill has been more lenient in their punishment of white students who have committed similar wrongdoings.

However, the college claims it did not discriminate Meads. The school’s attorney argues the state’s 1988 decision that religious freedom protects Catholic high schools’ discipline processes should apply to institutions of higher education as well. However, the commission’s lawyer says the standards are different for colleges because they receive public money.

Founded in 1879 by evangelist Dwight L. Moody, Northfield Mount Hermon School is an independent boarding school that once owned two campuses in Massachusetts, one in Northfield and another in Gill. The school consolidated its Gill campus in 2005 and sold its 500,000-square foot Northfield campus to the owners of Hobby Lobby for $100,000 four years later. In 2012, the family donated the campus to the National Christian Foundation after conducting $5 million in renovations.

Thomas Aquinas College plans on using the campus to launch its East Coast branch, which is expected to open in fall 2018.

The Moody Center is a nonprofit organization that hopes to restore historic aspects of the campus as well as develop a museum and archives.

Stamford, Conn. — For the 17th year, hundreds of colleges across the United States and Canada are participating in RecycleMania, a friendly collegiate recycling competition that promotes waste reduction on college campuses.

The eight-week competition will run until April 1. Colleges can compete in seven competitive categories. New rankings based on data reported by schools are posted at the end of each week. There is no cost to participate.

Out of the 308 colleges participating in RecycleMania this year, 23 are Catholic, including Loras College, Spring Hill College and Aquinas College (Mich.).

New Orleans — A production of “The Vagina Monologues” at Loyola University New Orleans was met with criticism after members of a pro-life club on campus learned that proceeds from the play would benefit Planned Parenthood.

“Although the Planned Parenthood in New Orleans does not currently provide abortions … we just could not believe that a pro-abortion organization should receive funding from a Catholic institution, since this was an official university sponsored production,” Sophie Trist, a sophomore English major and member of Loyola Students for Life, told The Maroon, the campus newspaper.

Loyola Students for Life reached out to Fr. Kevin Wildes, president of the university, to express their concerns. In response, Wildes reached out to Patricia Boyett, director of the university’s Women’s Resource Center, to request donating the proceeds elsewhere. The money was ultimately donated to the Sexual Trauma Awareness Response centers in Louisiana instead.

The grant will help purchase hardbound chant resources, new choir robes and stoles in university colors and upgrade music storage systems and choir folders. Any student can participate in the choir.