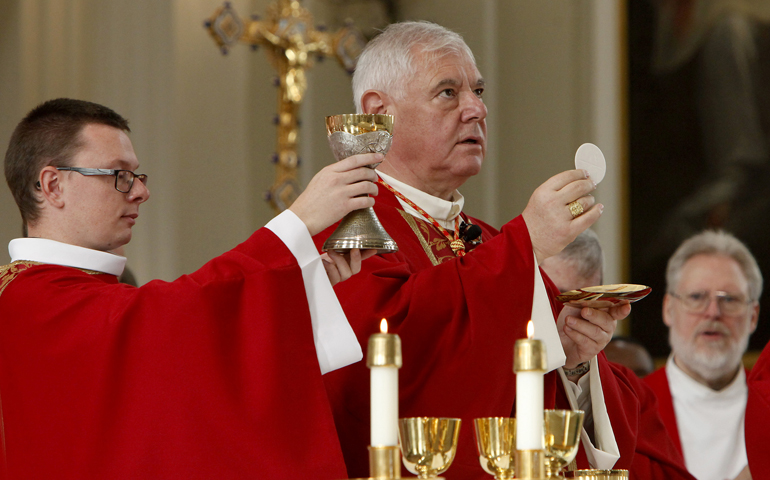 Cardinal Gerhard Muller, prefect of the Congregation for the Doctrine of the Faith, celebrates Mass at the Chapel of the Immaculate Conception in Mundelein, Ill., Oct. 28, 2016. (CNS/Karen Callaway, Catholic New World)

The head of the Vatican's doctrinal office has expressed disagreement with four cardinals who issued an open letter to Pope Francis questioning the apostolic exhortation Amoris Laetitia, saying the document is fully in line with church teaching.

Cardinal Gerhard Müller, who leads the Vatican's Congregation for the Doctrine of the Faith, has also said he was "astonished" that the cardinals would choose to make such a challenge to the pontiff publicly.

"Everyone has the right to write a letter to the pope, most of all the cardinals of the Roman church," said Müller, speaking Sunday evening in an interview with Italian TV channel Tgcom24. "However, what astonished me is that it was made public, trying to force the pope to say yes or no. I do not like this."

"It harms the church to talk about these things in public," the cardinal continued. "Amoris Laetitia is very clear in its doctrine and we can read into it all of Jesus' doctrine on marriage, all the doctrine of the church in its 2,000 year history."

Müller said the pope is asking the church at large "to discern the situation of persons who live in an irregular union ... and to help these people find a way for a new integration in the church according to the conditions for the sacraments."

"I do not see any contraposition," said the cardinal. "On one hand, we have the clear doctrine on marriage, on the other the obligation of the church to worry about these people facing difficulties."

Müller was responding in Sunday's interview to a November letter from four semi-retired cardinals, who asked Francis five yes or no questions about how he understands church teaching following the publication of Amoris Laetitia.

In the time since the publication of the letter, both Burke and Brandmüller have said that should the pope continue to not respond to their request they may try to pursue issuing some sort of "formal correction" to the pontiff. It is unclear how or under what authority they would issue such a correction.

Müller responded to that possibility bluntly. "A correction of the pope is not possible at this time because there is no danger to the faith," said the doctrinal chief.

A version of this story appeared in the Jan 27-Feb 9, 2017 print issue under the headline: Muller takes cardinals to task over Amoris Laetitia letter.