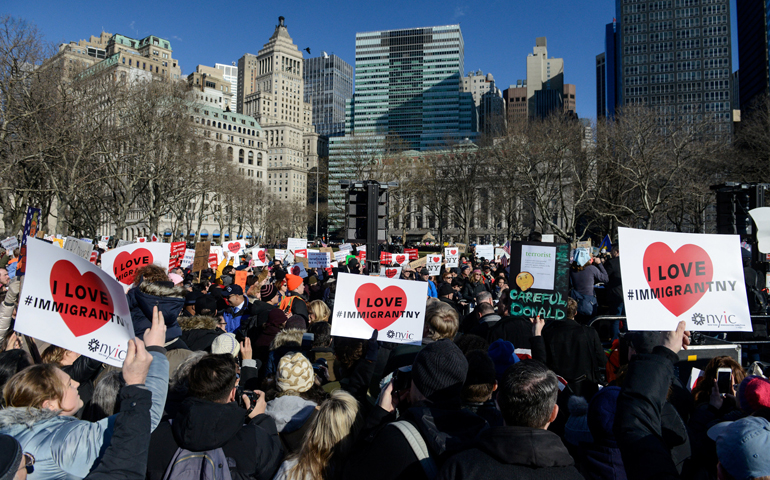 Some Catholic leaders are reaching out to President Donald Trump and other high-ranking officials to describe what their idea of a "comprehensive pro-life approach" should look like.

Eight Catholic organizations signed and sent a two-page letter on Jan. 27 to the president outlining their concerns for the future. The six areas of concerns were global conflict and violence, immigration, climate change, health care and social services, the refugee crisis and criminal justice. Abortion was mentioned only briefly in the beginning to say that abortion rates have declined after more comprehensive services were offered to women and families.

The groups started their letter welcoming "the opportunity to work with this new administration to promote the common good."

Continuing, "As Catholics, we see the human person as created in the image and likeness of God, and value all life as sacred. This sacredness is threatened with each sister and brother left vulnerable in our society. This includes the immigrant, the refugee, the mother at risk, the unborn child, people with disabilities, and the prisoner on death row."

At times, the organizations' agenda is a stark contrast to the Trump's administration proposed policies.

"The proposed deportation of over 11 million immigrants and the pledge to build a wall along the U.S.-Mexico border would break up families, forcing millions of people back into a life of poverty, political strife, and gang violence. We join the overwhelming majority of Catholics calling for comprehensive and humane immigration reform that provides a legal pathway for families to remain in our country. This includes maintaining the existing Deferred Action for Childhood Arrivals (DACA) program and providing protection for young immigrants," the organizations wrote in the letter.

The letter also discusses climate change, emphasizing Pope Francis' commitment to reform efforts. On the recently revamped White House webpage, the site states that the Trump administration is "committed to eliminating harmful and unnecessary policies such as the Climate Action Plan and the Waters of the U.S. rule."

On Jan. 24 Trump also released a memorandum on the Dakota Access Pipeline, asking the project to be reinstated stating, "I believe that construction and operation of lawfully permitted pipeline infrastructure serve the national interest."

The letter was released two days after Trump signed executive orders to resume the building of a wall on the southern border of the United States, withdraw funds from sanctuary cities and publish a weekly list of "criminal actions committed by aliens."

"Internationally, we face the largest refugee crisis since World War II. ... This presents a horrific failure to respond to the Catholic community's call to uphold and care for the life of the vulnerable in our society. We call for swift aid and support to address this crisis and reject proposals that would jeopardize the religious freedom of any groups, especially Muslims," the letter states.

The letter ends with a quote from Francis' address to Congress in 2015.

"Pope Francis called on all of us to uphold the dignity and value of all life: 'Our efforts must aim at restoring hope, righting wrongs, maintaining commitments, and thus promoting the well-being of individuals and of peoples.' We urge you to heed the words of Pope Francis and to serve with the wisdom and moral leadership that our world needs to uphold the dignity and well-being of all human life."