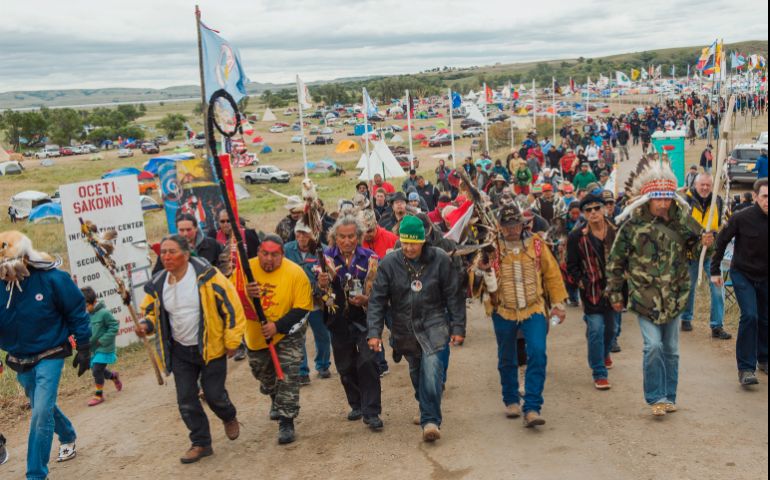 What is the Catholic response to the oil pipeline protest in North Dakota?

Major opposition has developed to the construction of an oil pipeline near the Standing Rock Sioux Reservation in North Dakota. Members of nearly 300 Native American tribes have gathered to express their opposition. Some tribes from as far away as Hawaii and Ecuador are participating. Recently a total of 8,000 protesters camped out near the site.

More and more, this battle is being seen as a spiritual one. The concern is that the pipeline winds through sacred sites where Sioux once lived and comes within a half-mile of their reservation. Dave Archambault II, Standing Rock Sioux tribal chairman, states that the creator instructed them to care for the land which includes water and all creation. The rallying cry has become, "Water is life."

Many Christian denominations have become involved in this fight. Denominations mentioned include the United Methodist Church, the United Church of Christ, the Episcopal Church, the Presbyterian Church, and the Evangelical Lutheran Church in America. Even the Nation of Islam is mentioned as having spoken out against the pipeline.

Two primary reasons are given for religious involvement. The first reason is related to the protection of the environment. Bruce Ough, president of the United Methodist Church's Council of Bishops says, "This is a protest about the stewardship of God's creation and justice for the indigenous people of the Great Plains."

The second reason given is about reconciliation. Demonstrators want to acknowledge the injustices done to Native Americans in this country over many years. Shantha Alonso, executive director of Creation Justice Ministries, says "this is an opportunity to stand with the tribe and affirm and follow their leadership in taking one more step toward reconciliation."

Stewardship and reconciliation would appear to be at the core of Roman Catholic teaching and especially of the Francis papacy. In his encyclical Laudato Si', Francis spells out the Christian role in protecting the environment and in working with others to provide stewardship and to fight against injustice. In a recent speech Francis notes that members of different religious communities must work alongside nonbelievers to respond to injustices in our world.

With all of the interreligious involvement and support presently asserting itself in the pipeline dispute, I am wondering where Catholic leaders stand. I am having difficulty determining a meaningful Catholic participation. Unfortunately, the only reference I was able to find was how the Roman Catholic missions in Sioux lands have worked to undermine the native cultures.

I am interested to know what Catholics in the area are doing to support this effort. Surely we should be in the forefront of stewardship and reconciliation.