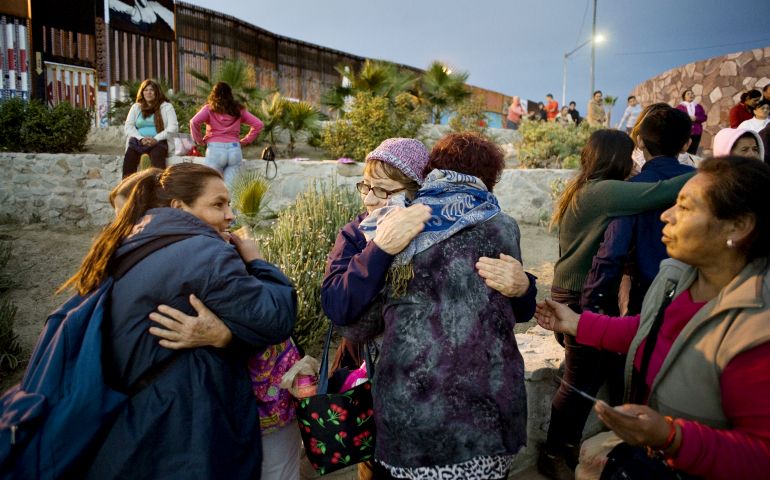 People hug during a Nov. 19, 2016, Mass near the U.S.-Mexico border fence in Tijuana, Mexico. The Mass and a procession with a statue of Our Lady of Guadalupe were a call to remember and pray for migrants. (CNS/David Maung)

A year ago this week, Pope Francis prayed and celebrated Mass at the U.S-Mexican border, a powerful gesture of solidarity with immigrants even as presidential candidate Donald Trump made the construction of a massive border wall the centerpiece of his campaign. When reporters asked about Trump's blustery promises at the time, the pope didn't equivocate.

"A person who thinks only about building walls, wherever they may be, and not building bridges is not Christian," he said. "This is not the Gospel."

Now in the White House, President Trump can't seem to shake a pope who has put the plight of immigrants and refugees at the forefront of his papacy. While many prominent Christian leaders and organizations — including several high-profile conservative evangelicals — have challenged Trump's proposals on immigrants and refugees, Francis stands out with his direct, persistent appeals to Christian conscience.

"It's hypocrisy to call yourself a Christian and chase away a refugee or someone seeking help," the pope has said. During his weekly general audience at the Vatican recently, Francis also made an unmistakable reference to Trump's vow to make Mexico pay for his promised border wall. "A Christian can never say: 'I'll make you pay for that.' Never! That is not a Christian gesture."

Francis, of course, is not going rogue. He echoes centuries of Judeo-Christian wisdom and Catholic teaching that recognize Christ in the migrant and the refugee. When Pope Benedict XVI visited the United States in 2008, he urged President George W. Bush to protect the unity of immigrant families. Then-Rep. Tom Tancredo, a Colorado Republican, crassly accused the pope of "faith-based marketing." Benedict's position on immigrants, he said, "may have less to do with spreading the Gospel than they do about recruiting new members of the church."

Steve Bannon, a key adviser to Trump who has reportedly cultivated ties with Francis' adversary Cardinal Raymond Burke, pushed the same crude line on his Breitbart News radio show last August. "I understand why Catholics want as many Hispanics in this country as possible, because the church is dying in this country, right?" Bannon said.

The notion that the Catholic church defends immigrants and advocates comprehensive immigration reform to boost its numbers is an insult.

The church walks the walk in the United States and around the world. The U.S. bishops' Migration and Refugee Services is a leading refugee resettlement agency. Women religious, the Kino Border Initiative, Hope Border Institute and Jesuit Refugee Service all have moral authority because they are on the ground accompanying immigrants and refugees while others point fingers and play politics. Catholic Charities USA has launched an $8 million campaign to support its agencies that provide refugee services. Many of them could experience major cuts and job losses, depending on the fate of Trump's executive orders.

My organization, Faith in Public Life, has launched "National Days of Prayerful Action" this week to coincide with the anniversary of the pope's visit to the border. Along with our partners, the Ignatian Solidarity Network, Sisters of Mercy of the Americas, Leadership Conference of Women Religious, NETWORK, Church World Service, the Franciscan Action Network, and CLINIC (Catholic Legal Immigration Network), we are urging people of faith to show up at town hall meetings where their members of Congress will be next week during congressional recess.

Showing up and speaking out at these forums is a powerful way to bear witness to the dignity of immigrants and reject the politics of fear. Prayer vigils in front of district offices are another way to take faithful action. As part of this campaign, several Build Bridges Not Walls events are planned in Cincinnati, Atlanta and northern Virginia, where local clergy and congregations are coming together to urge elected officials to reject Trump's immoral executive orders.

Faith in Public Life also is hosting a national "tele-town hall" for people of faith to call in and hear reflections from Jesuit Fr. James Martin and Missionaries of Jesus Sr. Norma Pimentel, executive director of Catholic Charities of the Rio Grande Valley. Pimentel is on the front lines of serving migrants. Her humanitarian respite center at Sacred Heart Church, which has ministered to immigrants fleeing violence and despair in Central America and Mexico, is a tangible expression of encounter and mercy.

Trump is facing stiff legal headwinds in the courts. His contempt for religious liberty and other constitutional principles seem to know few limits. No matter how those cases turn out, the president will have to face a pope and an energized movement of faithful resistance rooted in ancient moral truths.

Justice | The church walks the walk on immigration

Catholic coalition stresses importance of COVID-19 vaccine for all