Comments on NCRonline: Be part of the solution 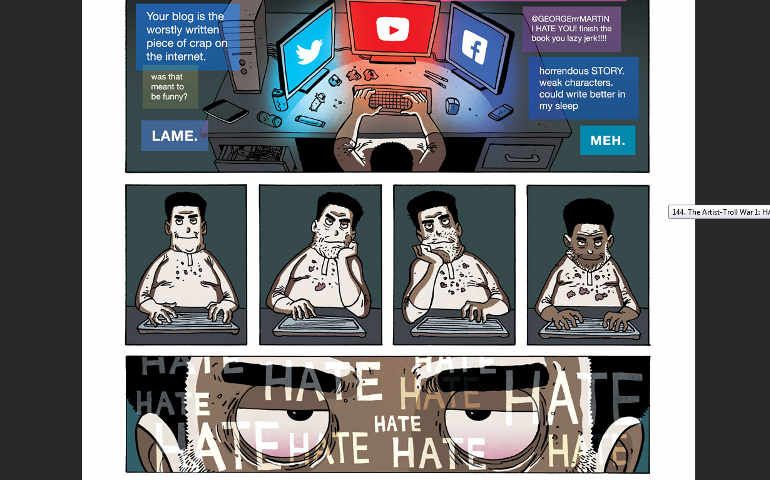 Screen grab from the website of Australian cartoonist Gavin Aung Than. “The Artist-Troll War, Part One ... Hatred Breeds Hatred” can be found at zenpencils.com.

It has been one month since we suspended the commenting feature on NCRonline.org. We are moving closer to restoring that feature to our website, so I thought readers would appreciate an update on what we have been thinking and working on.

Before we begin, however, I suggest you visit the website of Australian cartoonist Gavin Aung Than, who has a graphic representation of what I think this discussion of comments is all about: The Artist-Troll War, Part One ... Hatred Breeds Hatred.

Since comments were suspended on Jan. 6, I have received more than 140 emails from people with an opinion about the suspension. Our customer service department received many emails and phone calls, and our letters to the editor email box also received a couple dozen messages.

I have read all of them. I can summarize the content.

I heard over and over again how valuable comments are to the readers of the website. Some typical responses:

I am deeply saddened that this measure has become necessary. I had valued NCR as one of the places on the web where civilized discussion about important topics was still possible.

There must be ways to allow comments to continue. The comments are an *integral* part of NCR's dialogue.

I say it is time to end the moratorium on comments and remarks. There is great value and knowledge gained by the comments following the articles. I see lessons from the conservative writers as showing what was or is in-vogue within the church. I look to the more progressive commenters to show what our church should be or can become in the future. My point is that NCR provides a great vehicle for learning that helps me and others realize the depth, strengths and issues within our church.

I have heard your pleas, dear readers, about how much you value dialogue and discussion, and I am glad that you feel like NCRonline.org is one of the few Catholic websites that allow such a wide range of views to be expressed. I hear you. But before we all congratulate ourselves about how much we value discussion and dialogue and how much we learn from people with whom we disagree, let me share with you an exchange that transpired recently on another website. The comments are about a topic that is not infrequently a subject of NCR stories.

"You are the abominable Vatican II slime that oozes out of Apostasy and Schism. The Holy Mother of God would strike you down ..."

"And [name of poster] probably goes to church regularly, takes communion and calls herself a good Christian. Hmmmmm.........?"

The exchange goes on like this for some time, and others join in. I can’t bear to reprint more.

Now you tell me, how does this exchange further dialogue or discussion? This is vandalism to our website. Pure and simple vandalism. The reply comes from a person that some might identify as an "NCR-type reader," someone with progressive or liberal views. That the reply poster may share some of the editorial viewpoints of my publication doesn't mean I am any less offended by the reply. I have no patience for such claptrap. This is not dialogue.

Another point that this little exchange brings out is that the comment is not focused on the substance of an article, but the subject of the article. It is an attack on a person, who by happenstance is the subject (perhaps the reluctant subject) of a news story. Often, too, the writers of articles are attacked, though many times they are simply the reporter of an event or circumstance. And as I noted earlier, the worst of the worst attacks are directed at writers and story subjects from the LGBT community and at our women writers. How can we in good conscience allow such attacks? We can't. We will do what we can to stop them.

And now we come to the crux of the matter for NCRonline.org.

Lesson No. 1: There is no technology fix for this problem.

Reread the two-comment exchange above. Look at the words. Commenting systems have filters that automatically net and trash comments with offensive words and phrases, but there are no filters that would automatically flag the two comments above as offensive. There is no technology fix for this problem; it requires human intervention. Easy enough, you say -- have someone moderate your comment section.

Lesson No. 2: Moderation is not as easy as you think.

Everyone advocates for comment moderation but few people realize what it means. First of all, the sheer volume is a challenge. Prior to October 2012, before we started using Disqus for comments, when all comments went into a moderation queue, we were spending between four and five staff hours a day moderating comments. At that time, we were receiving about 300 comments a day. For the last six months of 2013, NCRonline.org was averaging 900 comments a day. (Averaging -- that means on a busy day, we had lots more.) The sheer volume of comments would make moderation more than a full-time job. Moderation also requires news judgment and a nuanced understanding of the issues under discussion. As such, I don’t believe it is a job that can be turned over to interns or volunteers, as some have suggested.

The question we are left with, then, is how much personnel time do we allot to comments on our website? We are acutely aware that NCR subscribers and donors trust us to be good stewards of the resources they send to this enterprise. We are a small staff, and sometimes readers forget that. (I can take the entire Kansas City, Mo., editorial staff to lunch in my 2003 Ford Windstar.) An hour spent moderating comments is an hour not spent gathering the news and commentary that brings you to our website in the first place. We have to balance those needs.

Lesson No. 3: Comments don’t come cheap; someone has to pay.

The big myth of the Internet (that people are lately coming to realize is false) is that content on a website is free or nearly free. You know that is not true. NCR's specialty is and always has been its boots-on-the-ground reporting. You know that when one of our stories carries a dateline of "Vatican City" or "Davenport, Iowa," it's because we had a reporter in that spot. You can trust that we have done our research and checked with sources. That’s what our readers have come to expect and we are dedicated to continuing. To keep reporters in the field, we sell subscriptions and advertising and we ask for donations.

Over two decades, NCRonline.org has evolved from a showcase for the newspaper, to an ancillary service to the newspaper, to where we are today: a news enterprise in its own right, with its own staff and needs. Comments are part of that service. Costs go beyond personnel, I might add. Websites may appear to exist in the ether, but they have a physical foundation. We have to pay for NCRonline.org to be hosted somewhere, and we have to pay for servers and technicians to keep the site up and running all day, every day. Comments on the website present challenges to server capacity and resources that also have to be paid for.

If you value the comments on this website, I hope you are making regular financial contributions to support this enterprise, but you are also going to have to pay with some of your privacy.

My high school social studies teacher hung a poster in his classroom: "If you're not part of the solution, you're part of the problem." We will need your cooperation.

The plan is to bring comments back online within a week. We will have a system to verify commenters, and we will have a more robust filtering system, but to make this next experiment with comments work, we will need commenters to police themselves better. That means simple things, like flag the trolls but don't take their bait. Resist the temptation to respond to every contrary comment. Let's keep the tone as polite as a dinner conversation.

Let me end with one last email I received from a reader asking the comments be restored:

I very much hope that after giving everyone the opportunity to reflect on what their vitriol has accomplished, the website can once again become open to reasoned, measured opinion.

Watch the website for more announcements Monday and Tuesday.

You may also want to read: Update on NCR suspending comments and NCR suspends comments on website

Comments on NCRonline: Be part of the solution