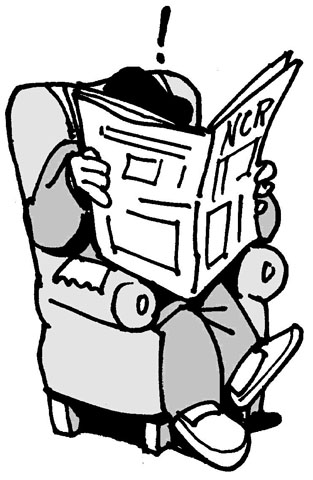 The assignment arrived out of the blue on an August afternoon while my school-age daughters and some of their neighborhood friends played in the sprinkler in the yard.

"We have an idea," NCR editor Dennis Coday explained from his office in Kansas City, Mo. (which operates two hours ahead of my own goings-on in Seattle). While watching the kids from the kitchen window, I listened to what came next, intrigued.

The gist of the idea was this: To mark NCR's 50th anniversary, let's feature a yearlong column focused on the voices and stories of those who had been with the newspaper since its beginning and every issue since. Over the course of the year, each issue would include a column titled "NCR: A Reader's Retrospective," offset in blue, featuring the life and works of one of these original subscribers.

In addition to highlighting a more personal side to NCR's past and present, it occurred to me that the project would also provide the opportunity to delve into some of the lesser-known aspects of U.S. Catholic history.

But there was a catch: Each column must be capped at 400 words. Could I do this? Dennis raised the question toward the end of our conversation, and it wasn't difficult to guess why. He was familiar enough with my work to know that not only do I love writing about people, but I love writing in-depth pieces, the kind of stories that seek to delve into the intricate complexities of life through the events, influences and places that shape human experience.

Condensing the pivotal moments of anyone's life into four paragraphs is never an easy task, but I welcomed the challenge. Yet as I began the process of reaching out to the first subscribers on my list, I quickly realized that dashing off a brief summary of each person, however well-intended and researched, wasn't going to be enough.

Instead, I decided that my goal would be to immerse myself, and others, in the spirit of that person's presence. Rather than base columns on career titles or accomplishments, I learned to trust that certain images and reflections, often from a childhood memory or another life-changing occasion, would help to guide each piece, like points of reference that accompany pilgrims on a journey.

Perhaps for this reason, I was able to keep focused despite the dizzying array of experiences represented by this far-flung gathering of sisters, priests, former priests who'd left the priesthood to get married, and laypeople. Common phrases often mentioned when interviewees would describe what NCR meant, and means, to them -- a "moral compass"; an "anchor"; a "lifeline for even those who have fallen away" from the institutional church; an "independent voice" -- also lent a further sense of continuity and familiarity to the process.

Week after week, I marveled at the stories and the stories within stories possessed by these people of faith. From whizzing across the Navaho reservation with Medical Mission Sr. Patricia (Pat) Lowery, a respected surgeon, in her Renault 4, to following the adventures of Providence Sr. Imelda Maurer, who served as a community organizer on sugarcane plantations and worked undercover in a J.P. Stevens textile mill, I found my own world opened up, stretched and deepened.

Every encounter, whether facilitated over the telephone or via email, offered yet another opportunity to learn from the insights and outlooks of men and women who had experienced major world events that I'd only read about in history books. Their words led me to the steps of St. Peter's in Rome during the opening session of the Second Vatican Council, introduced me to members of the once-burgeoning Christian Family Movement, and augmented former studies in theology (in the case of Rosemary Radford Reuther).

I was struck, too, by the helping presence of many family members and friends of subscribers who contributed to stories in various ways, such as sending photographs to NCR headquarters or assisting with research. Their loving attention was yet another reminder that those I interviewed, even in their later years, remained firmly rooted in their communities, whether physically, intellectually or emotionally.

In some cases, these caregivers answered my questions or clarified information with a devotedness that rippled in the background, like splashes of light through a church's stained-glass windows. In the case of Margaret Gonda Matesich, an original subscriber who had died in 1982, her daughters were a crucial part of the writing process, and the column became a way to honor their mother's life.

Whether the people I interviewed were describing gifts received, challenges faced, or disappointments consented to or overcome, their words even had this way of seeping into the hectic seasons of my own life as a wife and a mother. Conversations reminded me to cherish the present, as it would soon pass; other exchanges taught lessons in hope and resilience despite great loss and tragedy. Understandably, the deaths of loved ones were a not-infrequent discussion topic, sometimes triggered by a simple question -- "How many children do you have?" -- or a recounting of the past week, month, year.

I'm reminded of Mary Agnes Trauscht, whose husband died unexpectedly while they were preparing to move into an assisted-living community earlier this year. While acknowledging her grief, she also said that she has never felt alone; after meeting her new neighbor across the hall and striking up a conversation "about something going on in the church," she discovered that they are both NCR subscribers.

Other times, there arose an even deeper sense of connectedness between my own story and the stories of subscribers. One week, I was sick, and the person I was featuring at the time, a busy parish priest, cheerfully let me know he'd be praying for me. Another laywoman, who'd raised six children while earning a graduate degree in theology, encouraged me to remember that a letter grade wouldn't matter all that much in the end. (I must have mentioned that I was working on a term paper at the time.)

Then there was Fr. Doug Brougher, longtime chaplain at New Orleans' Touro Infirmary, who could tell such fluid, fascinating stories about his life in a city I'd always meant to visit. His account of fleeing Hurricane Katrina made me feel as though I was riding beside him as he drove, white-knuckled, toward safety; later, he slept on the floor of a Hindu temple in Jackson, Miss., because all the hotels were full.

To my surprise, then, this assignment became more of a personal journey than I'd anticipated, and surely this also has something to do with the nature of my own relationship to NCR over the years. Though I've never stepped inside NCR's headquarters, the editors have nonetheless been a contributing factor in my increasing awareness of and engagement with crucial issues and stories of our time. I've witnessed a peace vigil at a nuclear submarine base; conversed with Catholic parents and their gay son and his husband around a kitchen table; attended an ecumenical seminary where Muslim, Christian and Jewish students study side by side; and, most recently, visited a regional detention center.

Such opportunities to ask and learn and write have challenged and transformed my understanding of what it means to be Catholic, a word that also means "all-encompassing."

This series of conversations with "NCR Catholics," inspired by the spirit and commitment of men and women across the country who helped shape the newspaper's story over the past 50 years, was a collective effort that, issue after issue, also forged new connections and contexts within my life as a writer. As I turn to new subjects, their words echo -- a last reminder that when we share in others' lives, we are introduced in new ways to ourselves.

[Julie Gunter is a frequent contributor to NCR.]