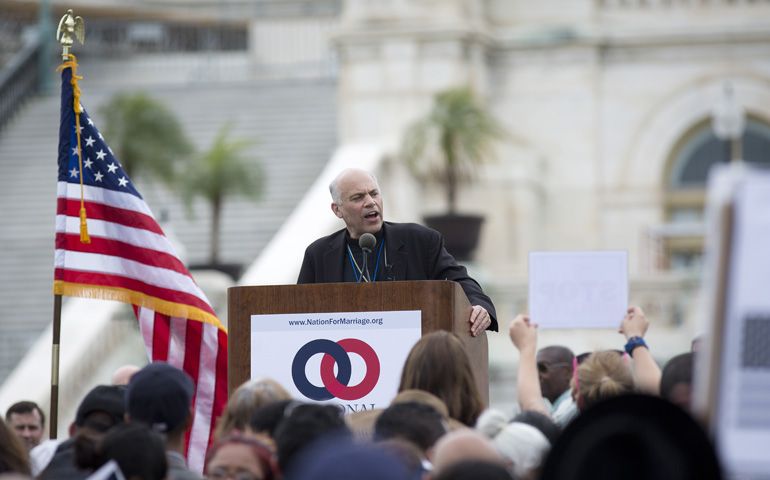 Archbishop Salvatore Cordileone addresses supporters of traditional marriage during the 2014 March for Marriage on the West Lawn of the Capitol in Washington. (CNS/Tyler Orsburn)

San Francisco Archbishop Salvatore Cordileone has announced he will not attend Saturday's March for Marriage in Washington, D.C., so he can "remain home and attend to the pastoral needs of the Church here at this time," according to an archdiocesan media advisory.

A point man for the U.S. bishops on marriage issues as chairman of their Subcommittee on the Promotion and Defense of Marriage, Cordileone was a lead speaker at last year's March for Marriage and at one time was listed on the event's website as a featured speaker for this year.

The advisory says that this year's March for Marriage will be attended by "a number of other bishops," including Archbishop Joseph Kurtz of Louisville, Ky., president of the U.S. Conference of Catholic Bishops, and Baltimore Archbishop William Lori, chairman of the USCCB's Ad Hoc Committee for Religious Liberty.

"These and other bishops will be representing the commitment of the Catholic bishops of the United States to the goods of marriage and religious freedom," the advisory states.

Cordileone "is grateful to his brother bishops for participating this year and will be there in spirit and prayer," the advisory states.

Tension over the prelate's pending insertion of a controversial statement into faculty handbooks of archdiocesan-owned high schools continues to make headlines in San Francisco, as does the full-page April 16 advertisement in the San Francisco Chronicle signed by an influential cross-section of more than 100 local Catholics asking Pope Francis to remove Cordileone.

The student-parent organization Concerned Students & Parents: Teach Acceptance announced it would hold a "Support Our Teachers Labor Rally" outside the San Francisco chancery at 4:30 p.m. Monday. Representation of area labor organizations will reportedly be on hand, and a representative of the four Catholic high schools' union will express appreciation for support. The gathering will take place as Cordileone meets with a contingent of Archbishop Riordan High School teachers on that campus.