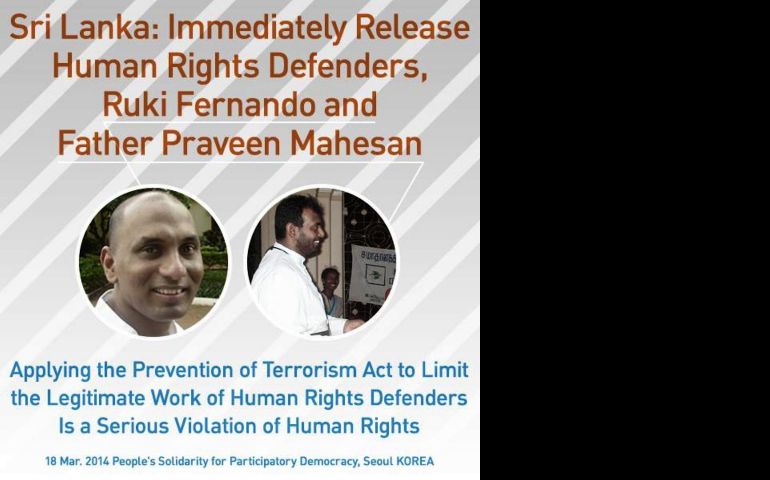 Manila, Philippines — Under international pressure, the Sri Lanka government on Wednesday released a human rights worker and a priest who had been detained under the country's law for checking terrorism.

Police arrested Fr. Praveen Mahesan and Ruki Fernando on Sunday night from Kilinochchi in northern Sri Lanka while the two were on a fact-finding mission in the area.

Mahesan, a member of the Oblates of Mary Immaculate order who directed the Centre for Peace and Reconciliation in Jaffna, is also parish priest of the Amaithipuran Church at Akkarayan in the Kilinochchi district. He has Tamil and Sinhalese parents.

The two were interrogated "harshly" in Kilinochchi and later in Vavuniya before they were held in the Terrorist Investigation Department headquarters in Colombo, Fernando told NCR in a telephone interview from Colombo after their release.

"I'm home now, and my parents and sister are very relieved for now," Fernando said.

The Sinhalese Catholic worker for Inform Human Rights Documentation Center in Colombo said he believes "the work and pressure exerted by so many people in Sri Lanka and all over the world eventually secured our release."

Their arrests came as the U.N. Human Rights Council in Geneva prepared to tackle a draft resolution sponsored by the United States, United Kingdom, Mauritius, Montenegro and Macedonia calling for an international investigation into "past abuses and to examine more recent attacks on journalists, human rights defenders and religious minorities."

Kilinochchi was the former headquarters of the Liberation Tigers of Tamil Eelam, a separatist group that lost the civil war when it ended violently in 2009, leaving tens of thousands of people dead.

"We went there to look into allegations of arbitrary arrest of several women in the north and the east during the week, and also to get a sense of what the situation was on the ground," Fernando said.

They were checking in Kilinochchi and surrounding areas where tension has been reported. On Saturday and Sunday, the two encountered "more than the usual checkpoints in the area." They were stopped in several places and delayed 15 to 20 minutes in certain areas where their identity card numbers were flagged.

"We went to visit someone in a house, then the army came and questioned us," Fernando said. "When we went on to visit another lady, that lady was already being questioned by intelligence officials, so we could not enter in her house. Finally, around 10 p.m. on Sunday, we were arrested."

They were taken in Tharmapuram near the home of Jeyakumari Balendra, who was arrested a week earlier for allegedly harboring an absconding Tiger.

"Initially we were told that (our arrest) was in relation to a shooting incident. Later, they said we were arrested in relation to supporting terrorism," Fernando said. Interrogations were "intense" and the two were not allowed access to their lawyers despite their requests.

Several lawyers and friends came to the police station after Fernando sent a text message about their arrest. Bishop Thomas Soundaranayagam of Jaffna sent senior priest Fr. Paul Natchathiram to the Kilinochchi police station to help them. "The Jaffna diocese issued a statement from Catholics calling for our release. There are many individual priests who were also lobbying for us," Fernando said.

He said he and Mahesan were arrested because "the government does not want the true situation in the northern part to be known to the rest of Sri Lanka and the rest of the world."

"The government does not want any story different from theirs to get out, and it was particularly clear that no information should be provided to the UN Human Rights Council currently in session in Geneva," Fernando said.

"During questioning, they asked me, 'Who are you sending this information to?' One of the three leaders who came to arrest me was saying I am sending information to earn money. That was one of their written accusations. Another is that I am causing discomfort to the government," Fernando said.

The Sri Lankan delegation to the U.N.'s human rights commission in reply to statements on the arrest and detention of Jeyakumari and the detention of Fernando and Mahesan claims to have information that says Liberation Tigers of Tamil Eelam operatives have returned to the area to revive their movement. They allegedly plan to recover weapons hidden by the Tigers prior to their defeat.

Fernando said the government -- the police and the army -- have been "edgy" about this.

"I don't know if it is justified or not because I don't have information, but according to what the police and army told me, they are treating it (the report on the Tigers' revival) as a very serious threat," he said.

Nonetheless, the police had nothing to show to the court about the two rights advocates after days of interrogation, so they requested the release of Fernando and Mahesan.

"I want to express great appreciation on behalf of Fr. Praveen to the people and organizations in Sri Lanka and also internationally," the rights worker said.

The experience shows him "if ordinary people, organizations and governments want to, they can actually make a difference in terms of providing safety to people who are in danger, ensuring that people who are detained unjustly are released. It is a very good example of what can be achieved if people are committed."

He said, "Very sadly, when Fr. Praveen and I walked out as free men, we left behind the many people who have been detained for much longer than us, but do not get even 1 percent of the attention that we got."

In February, Human Rights Watch published new evidence of the use of rape and sexual violence on detainees, along with other forms of torture already reported.

Fernando said he would discuss their next steps with Mahesan and lawyers.

"One thing that is clear for me and for Father is that we remain very committed to the work we are doing because we believe it is the right thing."

As Catholics, he said, they will "take these past two days as part of our Lenten pilgrimage and we will not be deterred by what has passed. We will continue to work for human rights."

[N.J. Viehland is NCR's correspondent in Asia, based in the Philippines.]

In behalf of the human family

Pope’s quotes: Awareness of the individual