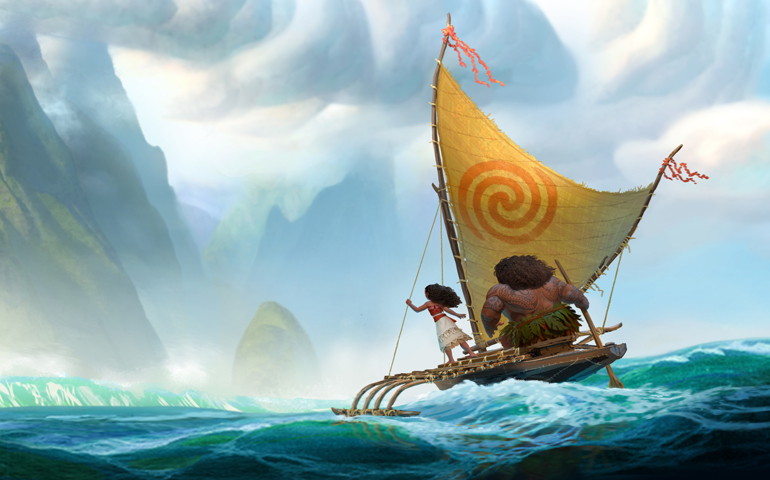 Characters are shown in a scene from the animated movie "Moana." (CNS photo/Disney)

"Moana" continues Disney's efforts to showcase a bolder princess. From "Mulan," "Pocahontas," "Brave," and recently "Frozen," Disney has sought to disrupt the damsel-in-distress type, upon which their animated film franchise was built ("Snow White," "Sleeping Beauty," "The Little Mermaid," etc.). Moana is different than every princess that came before her. First, she rejects the title of princess, until Maui, demigod/sidekick, reminds her that she is the daughter of the island's chief. Second, the love story is about Moana's love for her whole people, whose island is experiencing a mysterious blight.

The film is a great blend of CGI and hand-drawn animation. The hand-drawn provides great comic relief through Maui's living tattoos, a possible tip o'the hat to Ray Bradbury's The Illustrated Man.

The music of "Moana" is good with a few catchy tunes, but it does not rank with classics such as "The Lion King," "Beauty and the Beast," "The Little Mermaid," and "Frozen." Fans of Lin-Manuel Miranda's earlier work ("In the Heights" and "Hamilton") will recognize his style in "You're Welcome." "Shiny" by Jemaine Clement of "Flight of the Conchords" is an unexpected gem. Clement also appears in the post-credits scene, which is well worth sticking around through the credits. For my money, the most hummable song is "How Far I'll Go," a soaring tune that could be the next great anthem for recent high school marching bands.

In addition to following a new direction with their princesses, Disney has also sought a new path with their villains. "Maleficent" offered a more human and rounded look at a so-called villain. No spoilers here, but the way that "Moana" presents lava demon Te Kā is fresh and thoughtful. This is a good demonstration to steer children away from caricaturing and demonizing others as "bad guys."

For those looking for possible catechetical material, "Moana" contains echoes of Deborah, Esther, and Judith (minus the seduction and decapitation) as a woman is able to free her people from the threat of extinction. Another biblical theme in "Moana" is the chaos represented by water, which Moana's father forbids her to sail. Spoiler alert: Kids never listen, except when you ask them not to do something, then they do it. The most significant biblical motif, however, is the idea of a people who forgot that they were once voyagers in search of a homeland.

You shall also love the stranger, for you were strangers in the land of Egypt (Deuteronomy 10:19).

You shall not wrong or oppress a resident foreigner, for you were foreigners in the land of Egypt (Exodus 22:21).

In the 21st century, "Moana" can provide an opportunity for Catholic social teaching on welcoming immigrants and refugees.

"Moana" is visually absorbing, sonically captivating, and emotionally stirring. I saw "Moana" with my mother, my aunt, and my cousin, and we all confessed to tearing up during the movie.  Also as a bonus, "Inner Workings," the short animated featurette before "Moana," features a Franciscan friar performing several comic burial services.