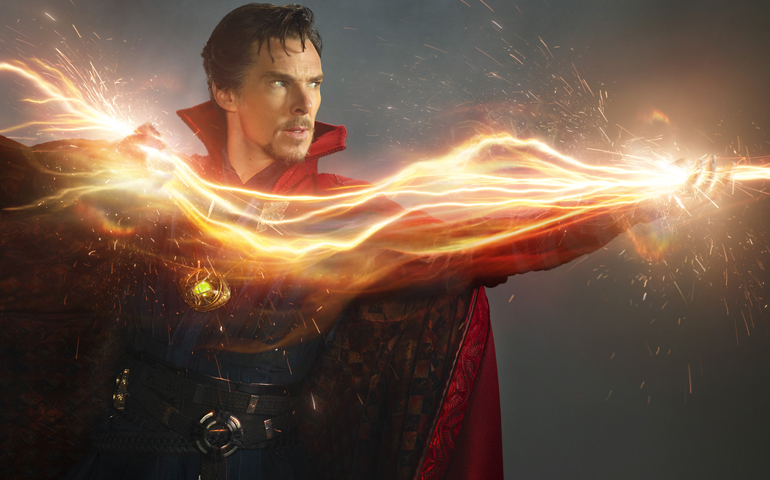 Benedict Cumberbatch stars in a scene from the movie "Doctor Strange." (CNS/Disney)

In 115 minutes (including the extra post-credit scenes) "Doctor Strange" accomplishes more than any other Marvel movie before it. The film tackles the fallibility of doctors determining "brain death," the struggle of ego and humility as the key to conversion, the consequences of violating natural law, and the disappointment with dishonest leadership. There's even a quote by Pope Francis slipped in there.

Unlike other superhero action films, "Doctor Strange" handles three conflicts in a satisfying even if incomplete way: Man vs. Self, Man vs. Man, and Man vs. Dark Dimension. Dr. Stephen Strange, a renowned neurosurgeon, was at the height of his career until a car accident robbed him of his manual dexterity. After exhausting the possibilities of Western medicine, he travels to Katmandu after hearing a rumors of a miraculous healing. There is a great dialogue with the Ancient One (played the appropriately ageless Tilda Swinton), where both Strange's empiricism and arrogance is confronted:

The Ancient One: Arrogance and fear still keep you from learning the simplest and most significant lesson of all.

The Ancient One: It's not about you.

After a crash course in the magical arts, Strange is set to battle simultaneously his own ego and Kaecilius, a sorcerer who has embraced the Dark Dimension. Strange and his allies conjure sparky portals to battle Kaecilius and his disciples, whose eyes are steeped in glittery purple mascara as the symbol of their pact with Dormammu, an evil cosmic deity. Marvel superheroes have never shied away from moral gray areas. Strange is no different. The theme of humility and the consequences of one's actions runs throughout the film. He is constantly being reminded, "Not everything is about you!"

In addition to holding up the virtue of humility, "Doctor Strange" also presents an opportunity for sacramental catechesis via negativa by observing what sacraments are not. I often fear that the way in which we talk about sacraments, prayers, and blessings borders on describing somethin closer to magic, spells, and charms. There are some superficial similarities in our celebration of sacraments and the sorcery of "Doctor Strange," but there are radical differences that should be emphasized.

Both utilize books and texts. Celebrants use missals, lectionaries, and rituals as guides for community worship. While Catholic rituals are open for public viewing, Wong, the sanctum's librarian in "Doctor Strange," protects the sacred books from those who crave their power. One of the inciting actions of "Doctor Strange" is the theft of a spell in an ancient language. Strange must learn the language to master the spell. Catholics use ancient languages (Kyrie eleison, Agnus Dei) as an illustration of our connection to history, not an exercise in gnostic esoterica. For Catholics, the use of particular words is not meant to obscure the meaning of the words, quite the contrary. The use of the same words during the celebration of the sacraments universalizes them. This was the major strength of the Mass celebrated in Latin, where every congregation in the world used the same words and prayers. Celebrated in the vernacular, the rubrics and rituals are helpful for aiding the minister's memory and also guarding congregations from idiosyncratic and improvisational liturgists.

Below the surface of books and language, the fundamental differences between sacraments and magic is the intention and the aim and the outcome. Sacraments allow us to participate in the mercy and generosity of God, and that participation guides us down the path of emptying our selfishness to work for the advancement of Kingdom of God. "We must decrease, so He can increase."

Magical thinking is the opposite. The spells of sorcerers in the movie are at their disposal for their own purposes. The sorcerer is the master of the spell, while the Christian is a participant in the Lord's sacramental gifts. Christians are stewards, not masters, of words and rituals that do not belong to us. The end or telos of the sacraments is not a quick-fix power surge or short-term manipulation of time and space. The end of a sacrament is meaning, which does not eliminate or manipulate suffering, but infuses it with significance. While the spirituality of magic aims towards cures, sacraments — like anointing of the sick and reconciliation, for instance — are directed towards healing, which may or may not be accompanied by a physical change in the person.

I doubt the producers intended for "Doctor Strange" to be an occasion for sacramental teaching, but it does provide the opportunity. The film is also visually stunning with world-bending, 'Matrix'-esque special effects. In light of the above, the minor flaws of "Doctor Strange" (purple-mascaraed villains, product placement for timepieces, and the frequent incorrect pluralization of "sanctum") are easily forgiven.