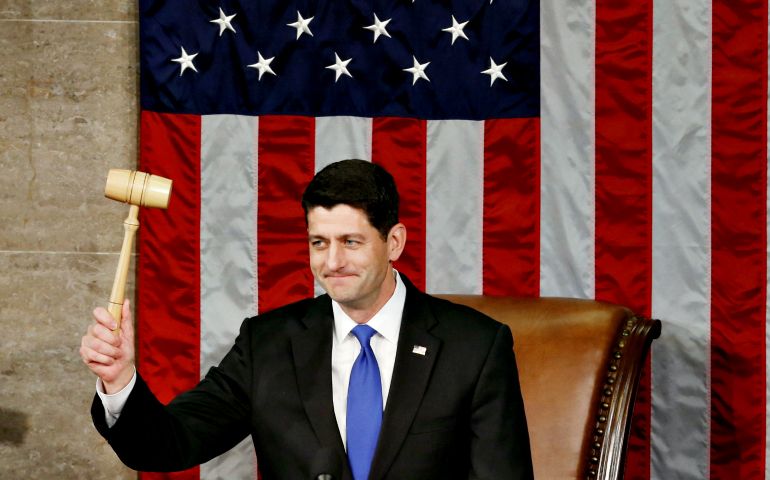 House Speaker Paul Ryan raises the gavel during the opening session of the new Congress on Capitol Hill in Washington Jan. 3. (CNS/Reuters/Jonathan Ernst)

I was in the hospital last summer for a blood clot in my lungs, what they call a saddle embolism. I went from the emergency room to intensive care to a regular room — all in about 50 hours. Then I went home, able to breath again and with blood thinners and instructions to be active.

Meanwhile, House Speaker Paul Ryan, R-Wis., would replace Medicare with a voucher system. I think the way it would work is that I'd get a lifetime total to spend by judiciously choosing cheaper treatments and forgoing trips to the doc when I just didn't quite feel good. Actually, I felt fine when I had the blood clot, except that I couldn't breathe when I went up stairs. For a couple of days, I put it off to aging. Good thing I wasn't worried about money when I decided I'd better go to the ER.

But now Medicare, too, has come into its sights. Republicans are not only questioning the damage dependence on government does to those poor people over there; they are questioning if my capacity to make right choices will be eroded by being the recipient of government insurance.

Our image of dependency on federal handouts builds on Ronald Reagan's false story of a welfare queen and seemingly endless anecdotes of seeing someone buy lobster with food stamps. We don't like the idea of somebody else getting lobster on my dime; let them eat beans and gruel. Beans and gruel, apparently, build character while lobster weakens it. And hunger builds even more character than beans and gruel.

We are at a moment in public life when some prevailing views are being challenged vigorously: Police don't lie; immigrants take jobs; Muslim immigrants are a terrorist threat; we don't have enough money. Let's add to that the belief that giving aid to those in need weakens their moral fiber. The public call to challenge these views is also a call to look within ourselves.