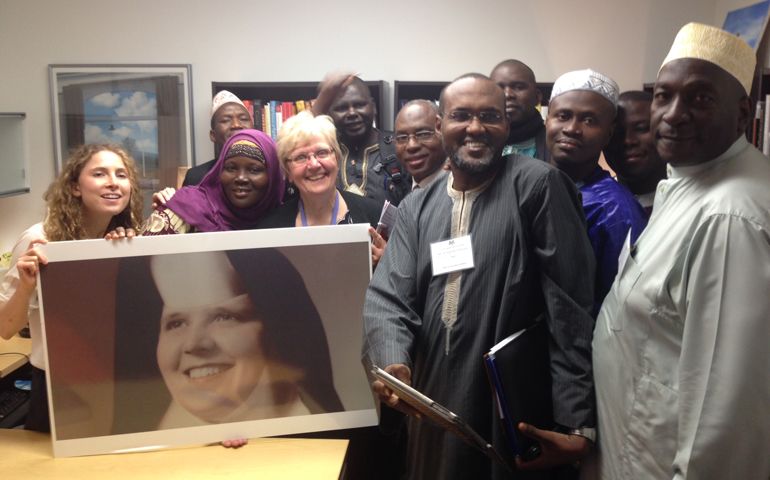 Loretto Sr. Maureen Fiedler (center), the staff of "Interfaith Voices," and African leaders pose with a photo of Fiedler as a young nun.

It happened again. Here at "Interfaith Voices," we got a second call from the State Department, asking if we would be willing to host a group of overseas visitors for a dialogue about interfaith relations and our public radio show. In February, our first visitors were Afghan clerics, both Sunni and Shiite imams. This time, it was a group of 10 African leaders from eight different nations: Benin, Burkina Faso, Cameroon, Malawi, Mali, Niger, Nigeria and Uganda. Most were Muslim.

Of course, we said yes, and we had a wonderful, enriching conversation. Our guests were very interested in the U.S. heritage of religious freedom and separation of religion and government. So I began with a brief overview of our heritage and the First Amendment.

All of them are engaged in promoting good interfaith relations in their respective countries and were interested in how we try to do that at "Interfaith Voices." One of the women, a radio and TV journalist herself, wondered how we handled callers who want to use foul language or spread hatred of another group on the air. "Interfaith Voices" is not a call-in show, but we were able to share with her the techniques used by call-in show pros like Diane Rehm, namely, screen calls to weed out the "ranters." That is a problem found worldwide, unfortunately.

But most fascinating of all (to me, at least) was our discussion of what causes war and conflict in the world, something many of these African leaders have seen all too often. They were highly critical of the Islamic State group, and they asked about whether religion causes war. I offered my personal theory: War is caused by quests for power, land or resources, not religion. But religion is often -- too often, these days -- used as a weapon in those struggles. Our guests nodded. They know this all too well from their own experiences.

On a humorous note: When we gave them a tour of our offices, my producer, Laura Kwerel, pulled out a large photo of me as a young nun! She had it made at the time of my jubilee in religious life and still keeps it in her office. I'm usually embarrassed by it, but as it turned out, these folks were fascinated. So the photo above reflects the fun we had with the picture. Would that diplomacy were always that easy!

Tom Steyer and preaching the environmental gospel on the campaign trail