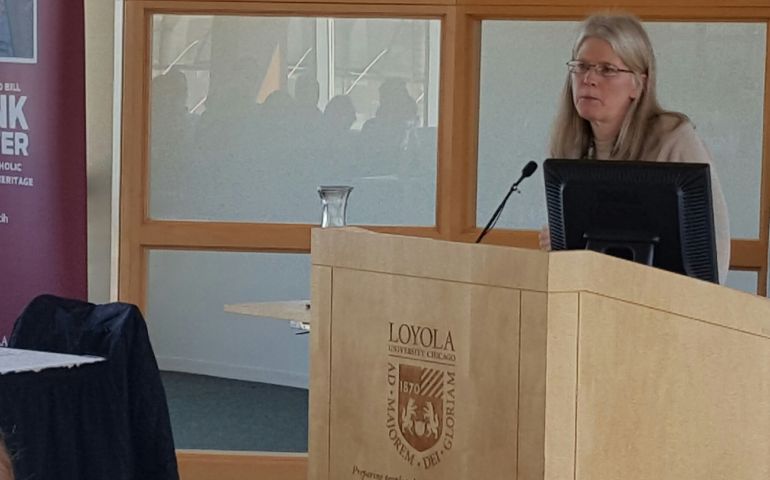 Chicago — Dorothy Day's granddaughter, Kate Hennessy, learned the importance of listening to her own "still, small voice" and following it — a task her "Granny" deemed sacred and one required of all people.

So, don't just admire Day, Hennessy warned at a symposium about her grandmother Feb. 17 at Loyola University Chicago. "If you’re going to pay attention to Dorothy Day, your life will be changed," she said.

Hennessy, the youngest child of Day's only daughter, Tamar Hennessy, recalled that when she asked her Granny what she should do with her life, Day told her to follow her conscience — "even if it's an ill-informed conscience," she said, although obviously a well-formed conscience was preferable.

"She said to never distrust that [inner] voice," Hennessy said, adding that Day believed discovering one’s own talents and vocation was sacred work.

Day, as co-founder of the Catholic Worker movement, was called to a radical life of voluntary poverty, community living and activism. But she recognized that was not everyone's vocation, Hennessy said.

Yet both of Hennessy’s parents struggled with finding themselves, Hennessy said. Day and her daughter, Tamar, had very different personalities — her grandmother, outgoing and talkative, while her mother was extremely shy and introverted.

Although Hennessy describes her grandmother as a "heroic" mother, Day inherited a "haphazard" method of parenting from her own parents, while her daughter seemed to crave stability. Tamar felt exiled from her family when she was sent away to a school in Canada as a teenager, she said.

This made it difficult for Day's daughter to find her own vocation, which was "diverted," Hennessy said, although Tamar loved living on the Catholic Worker farm. "When you grow up with such a powerful person, it's very hard to find your own way," Hennessy said.

Her father, David Hennessy, also struggled with accepting who he really was. A self-taught proponent of the back-to-the-land movement, he came to the Catholic Worker and fell in love with Tamar. Yet, although a devout Catholic, he had been in love with a man when he was young.

"This separation between what was in his heart and what he was taught broke him," said Hennessy, noting that her father's alcoholism was "just a symptom." He died "believing that he was going to hell" because of the church’s teaching about homosexuality, she said. "That's the tragedy of my father, and one of the reasons my mother left the church. She could not exclude or damage people in that way."

All of Day's grandchildren also left the Catholic church, as has Hennessy, who was raised "outside the church, but inside the Catholic Worker," she said. From her grandmother, she learned Catholic expressions of faith, while her own mother taught her about the sacredness of nature.

Although Day was sad about her daughter leaving the faith, she never "said one single word of reproach," seemingly respecting Tamar's own path, Hennessy said.

"The truth is my mother never lost her faith," Hennessy said, but Tamar couldn’t untangle faith from the Catholicism's rigidity.

Hennessy's own faith journey has been influenced by both her mother and her grandmother. From her mother she learned that "we are all children of God," while her grandmother was someone who both loved the hierarchical church but could also criticize it.

Day ultimately saw the church not just as the hierarchy but as — "and I'll use a term I don't completely understand," Hennessy said — the mystical body of Christ. "That really speaks to me," she said.

Author Jim Forest, chronicler of giants like Day and Berrigan, strengthened many